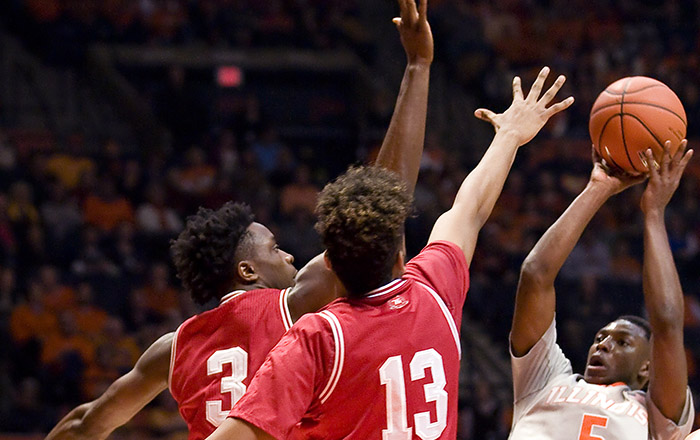 There is a week to go in the season, and Indiana already has clinched a share of the Big Ten title, by virtue of Ohio State upsetting No. 8 Iowa on Sunday night. Can the Hoosiers win the title outright? Or can someone grab a share of it?

Here is a look at the Big Ten week that was.

Best win: Ohio State vs. No. 8 Iowa. The Buckeyes needed this one so very bad. Other than the Kentucky victory, Ohio State had no signature wins to bolster its NCAA tourney resume. The Buckeyes got the win they needed Sunday night, and now they can add another signature win next week at Michigan State. This win won't get them into the tournament, but it kept their bubble from likely bursting.

Best stat: Indiana has clinched at least a share of its 22nd Big Ten title, which ties fierce rival Purdue for the most in Big Ten history.

IU has clinched a share of its 22nd B1G title - tied for most in league history. #iubb #GoIU pic.twitter.com/Xt5f9xC3JQ

Best moment: Jordan Smith's senior day. Smith, a fifth-year walk-on, entered Sunday's final home game with two points and one rebound on the season. He matched those totals in the final seconds of a win over Michigan, grabbing a defensive rebound and drawing the foul. Best of all: Smith, after nailing both free throws, was taken out for a curtain call.

Best dunk: Khalil Iverson vs. Iowa. Whenever someone throws down a nasty dunk, the predictable "Big Ten Dunk of the Year" talk makes its way into Twittersphere. Well, this one is more than worthy of the praise and the title.

The dunk was so good, it received #BTNRemix treatment.

Honorable mention laurels must go out to Mike Gesell, who threw down this unexpected one-handed slam in No. 8 Iowa's loss at Ohio State on Sunday.

Best outtake: Ted Valentine in Rutgers-Northwestern game. No Big Ten official is more recognizable than Valentine, and the veteran zebra received some air-time for picking up Jordan Ash's shoe and carrying it with him as the action continued down the other side of the court. He even raised it into the air, as if it was a prize.

Did you see this? Patrick Chambers ejected at Michigan State. A season ago, Chambers picked up a crucial technical foul late in a 66-60 loss at Michigan State, and proceeded to complain about not getting calls in the postgame press conference. In his first visit back to East Lansing, Chambers was hit with back-to-back technical fouls and ejected with just under five minutes left in the first half.

If you're wondering, Chambers said he and his team will not stop fighting in Sunday's postgame press conference.

Stock up: Indiana. Iowa?s loss at Ohio State on Sunday earned the Hoosiers a share of their 22nd Big Ten title. Indiana enters the final week riding a three-game winning streak. But heavy lifting remains, with the season closing out at Iowa and vs. Maryland. Win one of the final two, and the Hoosiers will be outright championships.

Stock down: Iowa. The wheels have officially come off. The Hawkeyes have lost three in a row and four of five games after stumbling at Ohio State on Sunday. The lone win in that span was vs. Minnesota. Winning that first Big Ten title since 1978-79 now looks like a long shot.

Bronson Koenig scored 15 points in Wisconsin's upset at No. 8  Iowa 67-59 on Wednesday night, and he added a game-high 19 points in a double-digit win vs. Michigan on Sunday night.

Marc Loving scored 25 points and Keita Bates-Diop had 19 points, four blocks and two steals in a huge win over No. 8 Iowa, 68-64, on Sunday to keep the Buckeyes in the conversation for an NCAA bid.

A.J. Hammons scored 19 points to lead five Purdue players in double figures, and the 20th-ranked Boilermakers held on for an 83-79 victory over No. 10 Maryland on Saturday.

Yogi Ferrell had 27 points, 19 in the second half, five rebounds and five assists to lead the Hoosiers past the Illini 74-47 in a tight game that turned into a blowout on Thursday.

Bryn Forbes made six of his seven 3-pointers in the second half and finished with 27 points to help the sixth-ranked Spartans pull away for an 81-62 victory at Ohio State on Tuesday night.

Tre Demps scored 24 points, 17 in the first half, and Alex Olah added 14 points and 10 rebounds, leading Northwestern to a 98-59 win over Rutgers on Saturday.

Jordan Murphy compiled a pair of double-doubles in Minnesota's win vs. Rutgers and in its loss at Illinois.

Rutgers has lost 16 in a row and 31 straight Big Ten games. In its 16 Big Ten losses this season, the Scarlet Knights are losing by an average of 22-plus points per game.

With Wisconsin's win at No. 8 Iowa on Wednesday night, the Badgers have a trio of victories over top 10 teams, also dispatching Michigan State and Maryland. They've also won 10 of their 11 games overall.

Bryan McIntosh's 13 assists in Saturday's win vs. Rutgers were one off the Northwestern single-game record, held by assistant Pat Baldwin.

The Boilermakers have won at least 20 games in eight of coach Matt Painter's 11 seasons at his alma mater.

The Buckeyes have won at least 10 Big Ten regular-season games the past 11 seasons, the longest streak in school history.

In the past two seasons, the Terrapins are 20-3 in games decided by six points or less, which is the best among Division I teams.

Michigan State?s Denzel Valentine, a national player of the year candidate, has a chance to become the first player in at least three decades to average 19 points, seven rebounds and seven assists. He entered the game averaging nearly 20 points, seven-plus rebounds and more than seven assists per game. The NCAA began keeping assists as an official statistic during the 1983-84 season.

"Knowing this was a winnable game for us, we didn't want to come and lay an egg out here and lose this game." – Minnesota?s Dupree McBrayer, after beating Big Ten winless Rutgers on Tuesday.

"This team can get so much better yet. They've done a good job of creating their identity." – Wisconsin coach Greg Gard, after a win at Iowa on Wednesday.

"Even with the losses coming in, we know we're young, injured, so it's not like we're just stinking it up. We have a lot of weaknesses." – Rutgers? D.J. Foreman, after a loss at Minnesota, the Scarlet Knights? 30th Big Ten defeat in a row.

"I had my eyes set on something and I didn't get it done. (Assistant Pat Baldwin) told me he wanted me to break it, but I don't know. I came out pretty quick." – Northwestern's Bryant McIntosh, on coming one assist shy of tying the program's single-game assist record (14), held by Baldwin.
"I gave him a pep talk. I told him, 'Shoot it, don't pass it. That allowed me to get great position inside." – Purdue's A.J. Hammons, on what he told Dakota Mathias before the sophomore went for a career-high 17 points vs. Maryland.

"I just thought Yogi Ferrell took the game over. And not just from a scoring perspective. You stand courtside and you hear his leadership. … He's clapping his hands. He's talking to the bench. He's into the game." – Illinois coach John Groce, after his team got blown out by IU on Thursday.

"They got to fix it. I can only do so much." – Maryland's Mark Turgeon, on his team's recent struggles following Saturday's loss at Purdue.

"They got to fix it. I can only do so much." - Mark Turgeon, after yesterday's loss at Purdue https://t.co/qe0UUy2drC