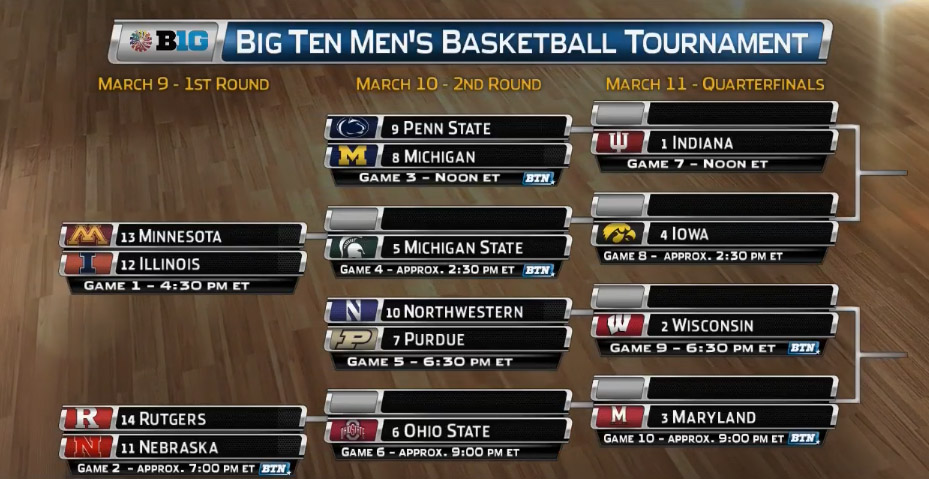 Here's what the @B1GMBBall tourney bracket looks like entering the final week of the regular season. pic.twitter.com/1vNmD52pwK

One more week. That's all that remains in the Big Ten men's basketball season.

Indiana clinched at least a share of the Big Ten title, courtesy of Ohio State's upset vs. No. 8 Iowa on Sunday night, its 22nd crown, which ties Purdue for the most in conference history.

The Hoosiers enter the final week of the season as the No. 1 seed in the Big Ten tourney. Interestingly enough, Indiana has yet to clinch a double-bye. That's because there's a four-way tie for second place, and the tiebreakers, should all finish 13-5, would push Indiana to the No. 5 seed.

Speaking of tiebreakers, the current four-way tie between Iowa, Maryland, Michigan State and Wisconsin is decided by overall record vs. the other three teams. No. 2 Wisconsin is 3-2 vs. the trio, No. 3 Maryland and No. 4 Iowa are 2-2, with the Terps winning the lone head-to-head meeting, and No. 5 Michigan State is 2-3.

Here's where all 14 teams stand entering the final week of games: