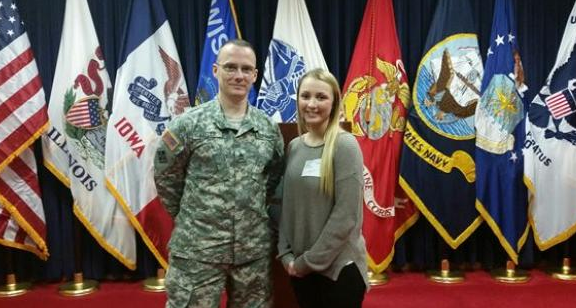 Iowa sophomore Megan Reaska is in the process of becoming the first female combat engineer in the state?s National Guard. And while she?s proud of this, Reaska admitted she?s something of an accidental trailblazer.

?I didn't know that when I first decided to be a combat engineer,? she said. ?That?s a pretty cool feeling.? 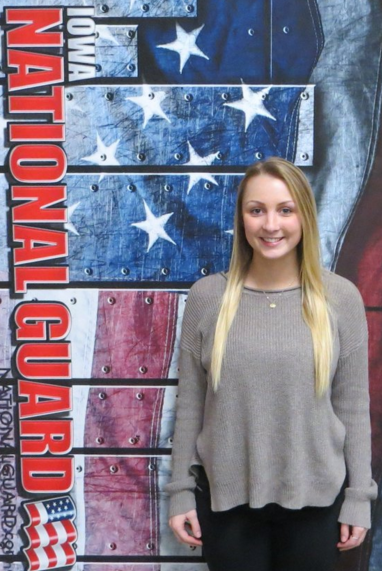 Born and raised in Streeter, Ill., Reaska spent the past few years moving between Iowa and Texas due to her father?s work. Now settled in Iowa for school, she?s looking to the future.

?I've been thinking about [military service] for a while now,? she said. ?My grandpa and two of my uncles were in the military, so it?s always been on my mind. During my senior year of high school, my dad encouraged me to join the military. But at 18 years old, I just wanted to go to college and live that experience.?

While pursuing her degree in therapeutic recreation along with a minor in human relations at Iowa, she received an e-mail from the Iowa National Guard recruiters with an invitation to attend an informational session they?d be hosting on campus. Reaska?s interest was piqued.

?They told me all about the Iowa National Guard, and what really drew me to it was that I would be able to do school and the military at the same time,? she said. ?Since [a conflicting schedule was] what held me back from joining the military in the first place, it?s an ideal situation."

For now, Reaska only has to dedicate one weekend per month with the Iowa National Guard. But it?s only going to become more of a challenge - combat engineers have some serious responsibilities.

?The simplest way to put it is you?ll learn the basics of engineering, learn to build things, and the combat part is where you learn to blow it up in an orderly manner,? she said.

Indeed, the National Guard reports that a combat engineer will ?construct fighting positions, prime and detonate explosives and become an expert in general engineering.?

She recently got through her first training drill, which she said was an interesting experience.

?It?s called the crawling phase or the red phase,? Reaska explained. ?Very, very nitty-gritty basics of the military. We learned who to call ?sir,? who to call sergeant, what the rankings look like. It was more of a classroom experience.?

Next up, she?ll learn formations, which Reaska explained as the salute or respect you pay when in the presence of someone of a higher rank.

[btn-post-package]The big leap will come in July, when she ships out to Fort Leonard Wood in Missouri, where she?ll be until late September/early October. While there, Reaska will endure 14 weeks of intense preparation, including Basic Combat Training and Advanced Individual Training. Part of her time will be spent in the classroom, and part in the field. Reaska will then return to Iowa for the spring semester.

Being enrolled in the Officers' Training Corps (ROTC), a college-based officer training program, could ultimately boost her career as well.

?When I graduate, if I continue with ROTC, I'll be a second lieutenant,? she said.

Reaska said she feels fortunate to be included in an institution that makes it possible for Americans to live in freedom.

?It?s such an honor to feel like I?m part of that.?