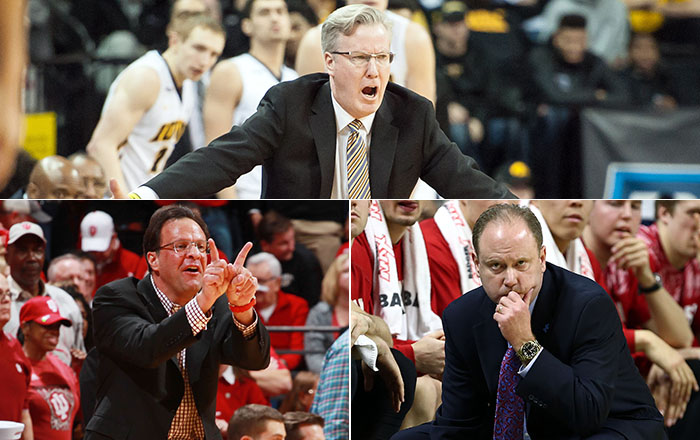 The finish line is in sight, and we are in a very tight three-horse race for Big Ten Coach of The Year.

I break down each coach's case below.

Fran McCaffery has 11-4 Iowa within striking distance of the Hawkeyes' first regular season title since 1979. Remember, no team other than Wisconsin lost more impactful upperclassmen than McCaffery. Sixth man of the Gabe Olaseni and first-team all conference forward Aaron White were difficult to replace. But Peter Jok and Jarrod Uthoff have both risen to the occasion, and are currently in the top four of my latest Big Ten Player Rankings. Iowa's conference schedule was brutal, and yet it is the only team to have swept Michigan State and Purdue. Three of the four wins vs. the Spartans and Boilermakers came by double digits, to boot. McCaffery has successfully implemented the 3/4 court zone to change tempo and disrupt opposing guards. The Hawkeyes rank third in the conference in scoring and fourth in field goal percentage defense. If the award was handed out today, I would give a slight edge to McCaffery. That being said, Iowa is fading quickly after losing back-to-back games when the games matter most. There is no more room for error.

Indiana's defense during the non-conference part of the season was inexcusable, especially for the type of talent the Hoosiers were putting on the floor. The ACC/Big Ten Challenge loss at Duke was the low point, as the Blue Devils carved up the Hoosiers in front of Dick Vitale and a national television audience. The Indiana fan base was fuming at what was looking like a lost season. Throw in the season-ending injury to sharpshooter James Blackmon Jr., and Crean and his staff had to figure things out quickly. Fast forward to today, and after blowing Illinois off of the court Thursday night, Indiana is two wins away from a guaranteed outright Big Ten title. Yogi Ferrell has been must-see TV (17 ppg; 3.9 rpg; 5.5 apg; 1.2 spg), and Indiana's offense is as entertaining as any in the country (77.8 pts). But we expected that. Crean is a coach of the year candidate because of his defensive adjustments. The Hoosiers aren't as reckless defensively in conference play and have been more sound against ball screens. Thomas Bryant is obviously training every day with the staff at becoming a better player, and Robert Johnson, the biggest beneficiary of the aforementioned Blackmon Jr. injury, is one of the better on-ball defenders in the league. And how good has freshman OG Anunoby been defensively? Just ask all of the scorers he has shut down. Yes, Indiana won the scheduling lottery this season, but wins are wins. If the Hoosiers defeat Iowa and Maryland to win the championship outright, Crean gets my vote.

After a rewarding win at No. 8 Iowa on Wednesday night, Wisconsin (18-10, 10-5) is tied for fourth place in the Big Ten standings. You know the stat, but it bears repeating: No Wisconsin team has finished outside of the top four in the Bo Ryan era. This was supposed to be the year that improbable streak ended, and it looked even more likely when Ryan retired before the conference season. Gard received the interim coach tag, taking over a Wisconsin team that was 7-5 and in rough shape. The Badgers had disappointing non-conference losses (Western Illinois and Milwaukee, to name a couple), returning stars Nigel Hayes and Bronson Koenig couldn't carry the team every night, the bench production was shaky, and the upcoming Big Ten schedule was intimidating. But Gard and the Wisconsin staff, once again did, what they have done best over the last decade, and that's develop players. Redshirt freshman Ethan Happ has turned into a force, Vitto Brown has a midrange shot to match his beautiful voice, and role players Jordan Hill, Kahlil Iverson, and Zak Showalter have all responded in critical moments to destroy the bubble and push the Badgers into the NCAA tournament. Winners of nine of their last 10, including three wins over then-top 10 teams, Wisconsin is a threat to win the Big Ten tournament. It will be hard for voters not to pencil Gard in if the Badgers finish fourth or better.

"As long as you stick together, there's nothing we can't accomplish." #OnWisconsin pic.twitter.com/b15gv7yFXF