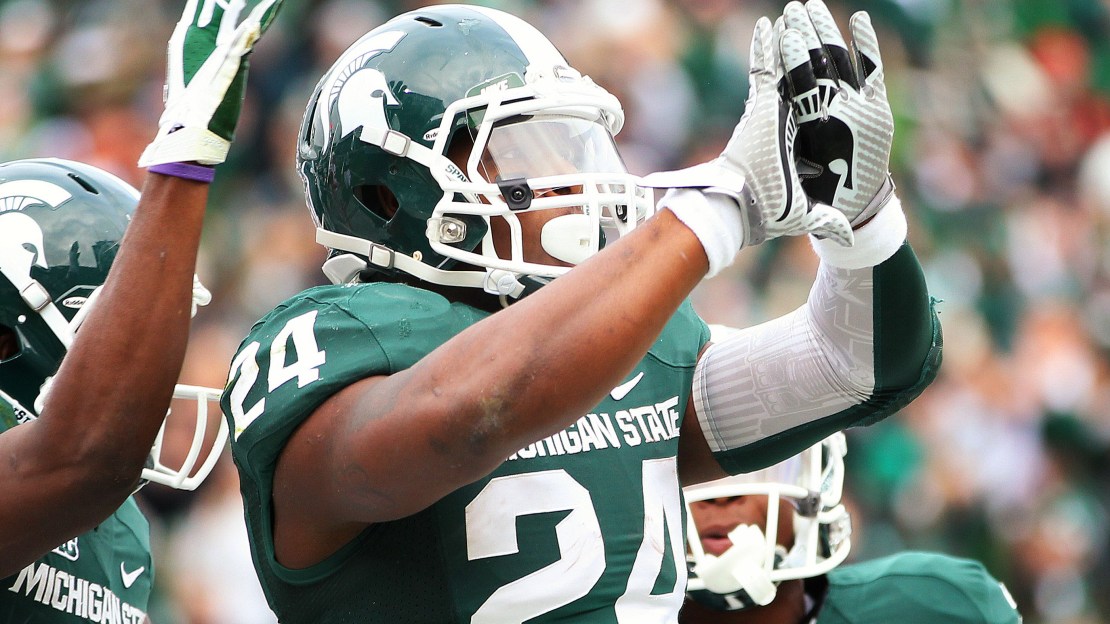 We are weeks removed from Signing Day, and all the hype surrounded Jim Harbaugh and the stud five-star recruits who will be playing in the Big Ten next season.

Well, what about those unheralded recruits who went on to have success in both college and the NFL?

Did you know that Russell Wilson, Le'Veon Bell and JJ Watt were all 2-star recruits coming out of high school?

I dug into the archives and came up with a list of the top Big Ten players who were unheralded recruits, according to rivals.com's rankings.

Here is a look at an all-Big Ten team made up of two-star and unranked players.

*These rankings went back as far as 2002, so players who graduated high school before then are not included on this list.

Wilson played football and baseball at North Carolina State from 2008-2010 before transferring to Wisconsin for his senior season. During his one year as a Badger, Wilson set the single season FBS record for passing efficiency (191.8) and led the Badgers to a Big Ten championship and the 2012 Rose Bowl game. He was selected in the third round of the 2012 NFL Draft by the Seattle Seahawks, where he has gone on to become one of the top quarterbacks in the NFL today.

Bell was an unheralded recruit out of Ohio who ended up at Michigan State after not receiving another Big Ten offer out of high school. He went on to have a standout college career, rushing for more than 3,000 yards and 33 touchdowns in three seasons at MSU. He was drafted in the second round by the Pittsburgh Steelers in the 2013 NFL Draft. In three seasons with the Steelers, Bell has totaled more than 4,000 yards and 22 touchdowns in 35 career games. Bell finished the 2014 season second in the league in rushing on his way to being named an All Pro member.

Greene was a 2-star prospect out of New Jersey who committed to the Hawkeyes out of high school. He had an incredible season in 2008, rushing for 1,850 yards and 20 touchdowns on his way to winning the Doak Walker Award, which is given to the nation's most outstanding running back. Greene was the only player that season to rush for more than 100 yards in every game, which earned him unanimous All-America honors. He was drafted by the New York Jets in the third round of the 2009 NFL Draft. Greene enjoyed back-to-back 1,000-yard rushing seasons in 2009 and 2010 with the New York Jets. He is currently an NFL free agent.

Chandler, a two-star recruit out of Texas, originally committed to Iowa as a wide receiver. After spending the first two years at Iowa as a receiver, he converted to tight end in his junior year and went on to lead the Hawkeyes in receiving with 47 receptions for 552 yards and two scores. In his senior year, Chandler hauled in 46 passes for 591 yards and six touchdowns. He went on to be selected in the fourth round of the 2007 NFL Draft (129th) by the San Diego Chargers. After going from team-to-team early on in his career, Chandler found a home with the Buffalo Bills in 2010. He is now a member of the New England Patriots.

A former walk-on, Long built a reputation for being one of the best linemen in the country during his time at Nebraska. He was a first-team All-Big Ten selection in 2012, and a second-team All-American. Long played in the first six games at right guard during his senior season, before suffering a knee injury at Purdue. He went on to be selected in the third round of the 2014 NFL Draft by the Washington Redskins, which is where he currently plays today.

This former Wisconsin standout enjoyed a great career in Madison, WI. Wagner started 37 games in his college career. He was named a consensus honorable mention All-Big Ten member in 2010 and 2011, and was a preseason candidate for the Outland Trophy in 2012. Wagner was selected in the fifth round of the 2013 NFL Draft by the Baltimore Ravens. He is currently the starting right tackle there.

Allen was outstanding during his time at Illinois, closing out his career with 47 consecutive starts. He was selected in the second round in the 2012 NFL Draft by the Kansas City Chiefs. Allen has been with the Chiefs for four seasons now, starting 36 games in his career.

Slausen was a force on the Huskers' line in the mid-2000's. He was an Honorable Mention All-Big 12 selection in 2006 and 2007, and a second-team All-Big 12 pick in 2008. Slausen was drafted by the New York Jets in the sixth round of the 2009 NFL Draft. After beginning his career with the Jets, Slausen is now in a member of the Chicago Bears.

One of the top walk-ons in the Big Ten over the past decade, Conklin was a staple on the Spartans' offensive line during his college career. He was a freshman All-American in his first year, a second-team All-Big Ten selection as a sophomore, and an All-American as a junior. Conklin decided to forego his senior season and enter the upcoming 2016 NFL Draft.

Watt committed to Central Michigan out of high school, playing tight end during his freshman season. He then decided to forgo his scholarship and walk-on at the University of Wisconsin, where he played defensive end. At Wisconsin, Watt developed into one of the top defensive linemen in college football. He was a first-team All-American and the winner of the Lott Trophy in 2010. He went on to be selected by the Houston Texans with the 11th overall pick of the 2011 NFL Draft. Watt has developed into the top defensive player in the NFL today and is already considered to be one of the most dominant players in NFL history.

Nassib walked on at Penn State in 2011 and redshirted that season. He played sparingly early on his career, but enjoyed a breakout senior season in 2015. Nassib led the nation in sacks this past season with 15. He was named the Big Ten Defensive Player of the Year, while also receiving All-American honors. He is expected to be an early round selection in the upcoming NFL Draft.

A 2-star recruit out on Minnesota, Klug was initially recruited as a linebacker. He developed into one of the top defensive tackles in the country during his time at Iowa. He started 26 consecutive games as a junior and senior before being selected in the fifth round of the 2011 NFL Draft by the Tennessee Titans.

Richardson was a standout defensive lineman at Indiana before joining the New Orleans Saints as an undrafted free agent in 2015. He had a great rookie season, recording 40 tackles, a sack and an interception in 15 games.

Hitchens was recruited to Iowa as a running back, but he quickly made the switch to linebacker and developed into one of the best in Iowa history. He led the Big Ten in tackles per game in his junior season with 11.2, which also ranked fifth in the nation. He recorded 112 tackles in his senior season, finishing his career with 270 career stops, which ranks in the top 20 in Iowa school history. Hitchens was drafted by the Cowboys in the fourth round of the 2014 NFL Draft.

Wilson transferred to Minnesota from Jones County Community College and played his junior and senior season for the Gophers. While at Minnesota, Wilson recorded an eye-popping 197 tackles in two seasons. He was named All-Big Ten his senior season after recording 119 stops, the most by a Minnesota player since Kim Royston made 123 in 2011. Wilson was selected in the fourth round of the 2015 NFL Draft by the Dallas Cowboys, which is where he plays today.

The Big Ten was loaded with outstanding walk-ons in 2015, and Schobert was one of the best. He ranked in the top-five in the nation in TFLs (14.5) and forced fumbles (four). He was named Honorable Mention All-Big Ten and was a Bednarik Award and Lombardi Award semifinalist.

Waynes was a two-star prospect out of Wisconsin, and Michigan State scooped him up, developing him into one of the best defensive backs in the nation. He totaled 101 tackles, six interceptions and 13 pass break-ups in 36 career games. The former Spartan shutdown corner was selected with the 11th pick in the first round of the 2015 NFL Draft, making him the highest drafted Spartan during the Mark Dantonio era.

Considered to be one of the best defensive players in Michigan State football history, Dennard was a three-year starter at cornerback and a two-time first-team All-Big Ten member. He totaled 167 tackles and 10 interceptions during his career. The former All-American was the Jim Thorpe Award winner in 2013, given to the nation's top defensive back. He was selected in the first-round of the 2014 NFL Draft by the Cincinnati Bengals.

One of the top walk-ons in Michigan football history, Kovacs started 46 games at safety during his career. He left Michigan having recorded 331 career tackles, which ranks 12th in Michigan football history. He is only the 15th player in school history to record 300 tackles during a career. The former walk-on signed as an undrfated free agent with the Miami Dolphins following the 2013 NFL Draft. Kovacs is currently a member of the Kansas City Chiefs.

One of the best players in Rutgers football history, McCourty enjoyed a standout college career. He totaled 238 tackles and six interceptions during his time at Rutgers. He was selected in the first round of the 2010 NFL Draft by the New England Patriots, and has been a member ever since. He was selected to the Pro Bowl in his rookie year and is a two-time All-Pro Second Team selection. He is also a Superbowl champion.