MSU's Matt Costello: 'Only thing we are lacking is consistency' 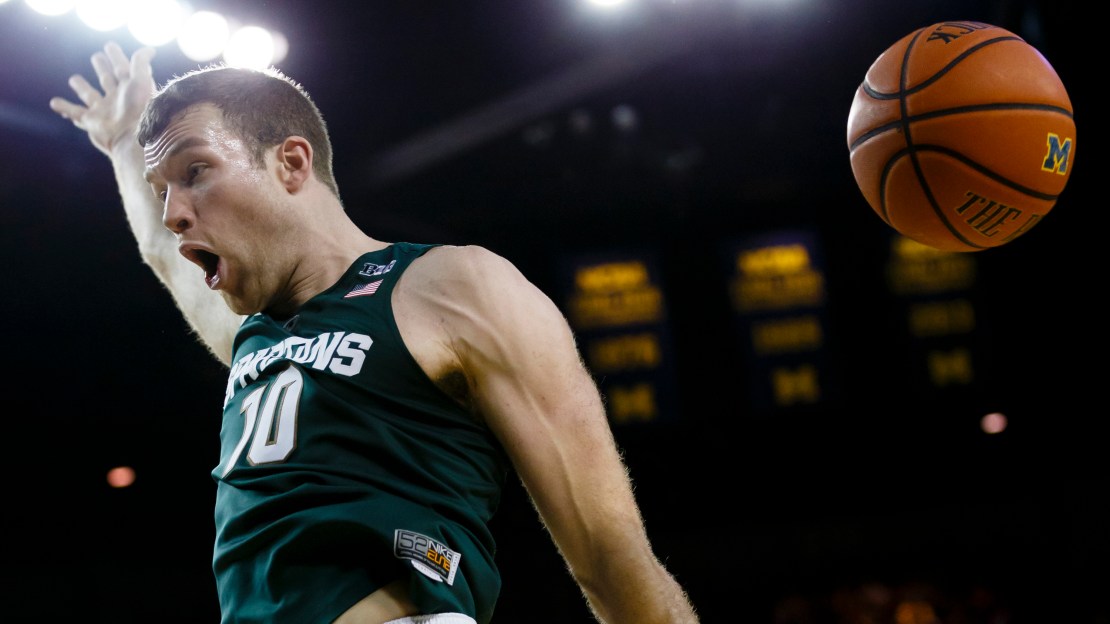 No Big Ten team is playing better than Michigan State right now. The Big Ten title may be a long shot as the Spartans have two more losses than league leader Indiana, but the Spartans are the highest-ranked league team and will enter March as a looming force in the Big Ten tourney and NCAA tourney.

Much credit goes to Denzel Valentine, the leading contender for national player of the year, but he?s getting a lot of support. One of the key cogs for this surging team in senior Matt Costello. The 6-9, 245-pound native of Linwood, Mich., is second in the Big Ten in rebounding (8.1 per game) and tenth in blocks (1.2 per game) while averaging 10.3 points for the Spartans, now 23-5 (10-5 in the Big Ten).

After a three-game losing skid, Michigan State has gone 7-1 with the lone loss at Purdue in overtime. I caught up with Costello this week to get his thoughts on a variety of subjects as the Spartans get ready to take on Penn State on Sunday at noon on BTN (here's the link to watch on BTN2Go, too).

Q: What have been the keys to Michigan State?s rise since that three-game losing skid?
A: We weren?t ourselves. We had to adjust to having Denzel back from injury. It took a while. He didn?t want to disrupt what we had been doing without him. It took a few games, but we all finally adapted and we are playing well now.

Q: What freshmen have impressed you?
A: Deyonta Davis is our McDonald?s All-American who is coming into his own. He struggled at the beginning of the season trying to find his niche among the older guys. But he has become more comfortable now. He is doing a lot better. Matt McQuaid, "Mr. Big Shot" for us at the start of the season, has had his ups and downs trying to find a spot. He is coming into his own and finding is role.

Q: What makes Denzel Valentine so special?
A: His ability to do everything, rebounding, defending, scoring, passing ? he can do all of it very well. I can?t say he is fantastic at any one thing. But I would give him and 8 out of 10 on everything.

Q: When do you know Coach Izzo is gonna lose it?
A: We know most of the time when we?ve made a mistake and are about to get chewed out. We try to prepare ourselves for the coming storm. We try to hunker down and take it and try to learn from it. Even though he does blow up, he does have good information. We have to take that information and run with it.

Q: What makes you a good shot blocker?
A: Being in the right place at the right time. I don?t normally get up real high to get them. I don?t have the most bounce in the world. It?s good timing.

Q: What foe has given you the most fits this season?
A: There have been two I have really struggled with. One was Ethan Happ of Wisconsin. He did a pretty good job of frustrating me (last week). And A.J. (Hammons) of Purdue. He is just so big, skilled and strong. I really struggled guarding him and figuring out ways to beat him.

Q: You have stepped out to three-point range and drained a couple this year. You are 2-of-6 this season. How does that feel for a big man?
A: It?s a lot of fun. In high school, I shot a lot of threes. My role here is more in the post. I like to extend it a bit, not going crazy. But I like to pick my open spots and shoot when I can. It is fun and gives a big man a dream to play like a guard every once in a while.

Q: Is this a Final Four team?
A: I think it is a national championship-caliber team. We have all the pieces, inside game, outside game, unselfish, running game. The only thing we are lacking is consistency. We need to be consistent all the way through. Get those hard-fought, grind-out wins.

Q: When you aren?t draining three-pointers or blocking shots, what?s your favorite local place to eat?
A: Has to be Crunchy?s. I go there once a week for Bible study. I don?t get anything exotic.