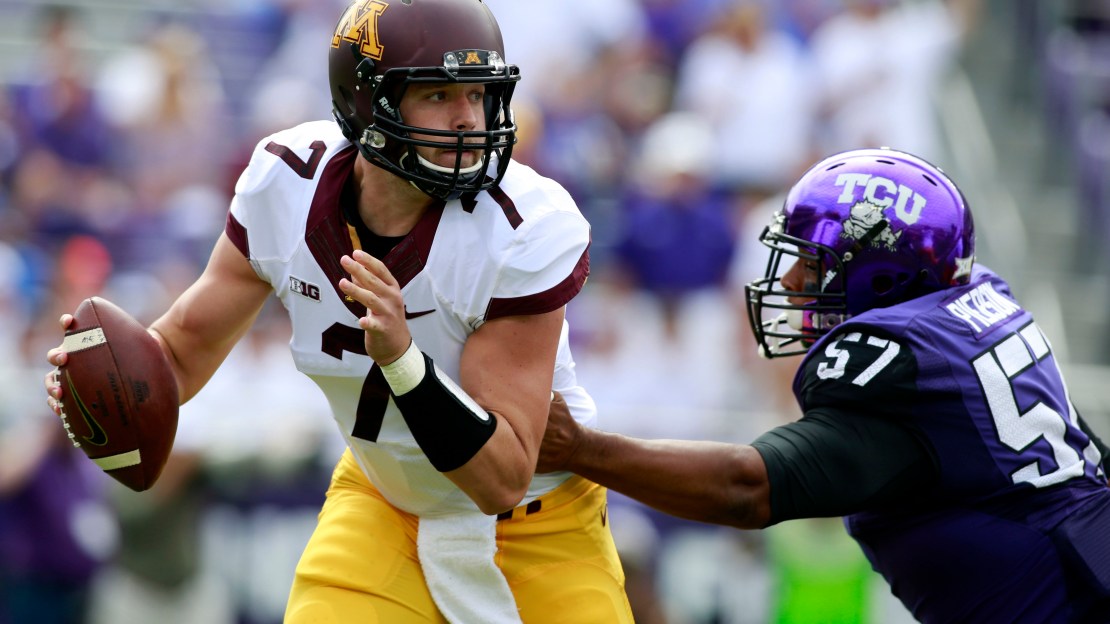 Jerry Kill is gone. The Tracy Claeys era has begun. And, change is brewing ? it has been for several months. The program is on solid footing, having been to a bowl each of the last four seasons. But the staff has been altered with a new offensive coordinator/quarterbacks coach and offensive line coach. Still, there is momentum coming off a bowl win that capped a disappointing 6-7 season.

Johnson?s offense at Louisiana-Lafayette employed a spread that often had the quarterback in the pistol formation and used lots of misdirection. Miller worked the last two years at FAU. He coached Wisconsin?s line in 2012 under Bret Bielema.

Keep an eye on the battle to backup QB Mitch Leidner, who is coming off left foot surgery and will be limited in the spring. Sophomore Demry Croft and early enrollee Seth Green will get a chance to impress. Croft got his feet last year and drips with potential. Green is a ballyhooed recruit from Texas who originally committed Oregon.

1. Offensive line. The staff is counting on JC transfers Garrison Wright and Vincent Calhoun-both on campus–to start at the guard spots. Jonah Pirsig will be the right tackle and Tyler Moore will be the center. They are the two returning starters. Who will be the left tackle? It could be redshirt freshman Nick Connelly ? or Wright. If Wright wins the tackle spot, it would open a guard slot for Connor Mayes, who started nine games last year. New line coach Bart Miller wants the front to be stronger. This area is a huge area of emphasis for Claeys in the spring.

2. Punter. The staff needs to replace Peter Mortell, who was 2014 Big Ten punter of the year and left campus with a 44-yard average-the best in school annals. Jacob Herbers, who is a lefty, will get a shot as will kicker Ryan Santoso. The Gophers also have Logan McElfresh. Santoso is the only one of this group who has punted in a game, which he did once when Mortell was injured.

3. Secondary. The Gophers lose two All-Big Ten corners in Eric Murray and Briean Boddy-Calhoun. Jalen Myrick, who has a ton of playing time, should step in fine. Who is the other corner? A guy to watch is sophomore KiAnte Hardin, who has gotten stronger. Antonio Schenault got his feet wet as a true freshman last year and also is in the mix. And Claeys is high on redshirt freshman Ray Buford. At safety, keep an eye on Damarius Travis, who received a medical redshirt after missing all but one game last year because of injury. Some staffers felt he could have been the team?s top DB in 2015. Former walk-on Kunle Ayinde took over for Travis. Ace Rogers is another player coming off injury who will miss spring but figures in the mix. Duke McGhee and Dior Johnson also are competing.