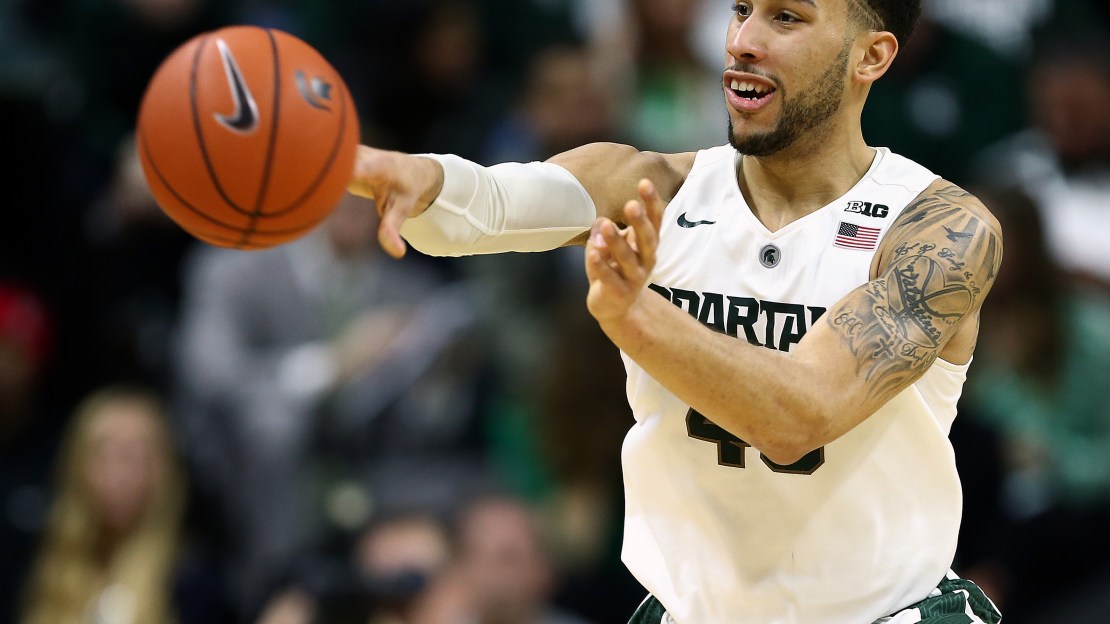 Michigan State?s Denzel Valentine is in a tight race with Oklahoma?s Buddy Hield to be national player of the year. At least according to Kyle Austin of Mlive.com.

Hey, I?m not gonna argue that. Valentine may be the best all-around player in the nation, a multi-purpose threat who can do it all and is pushing this team to great heights. Is any Big Ten team playing better? Nope. After a three-game stretch during which he's averaged 27 points and 11 assists, Valentine is firmly back in the national player of the year race that some had called for Buddy Hield not too long ago. With four regular-season games left apiece, the race between the duo looks like this:

Ohio State may be the ultimate Big Ten bubble team. Cleveland.com looks at the Buckeyes? resume.

The Buckeyes are 18-10 overall and 10-5 in the Big Ten. That looks pretty good, but 10 league wins does not guarantee a bid. Bill Landis notes that starting Tuesday at 9 p.m. vs. Michigan State, the Buckeyes need to win at least two of these last three or they'll be in a position where the only path into the NCAA field would be winning the Big Ten Tournament. That's because the Buckeyes, despite those 10 Big Ten wins and their first four-game conference winning streak in more than three seasons, don't yet have the makeup of a bubble team. Of the 100 bracket projections sampled by bracketmatrix.com, not one had Ohio State in the field as of Sunday night. And those last three games are killer: MSU; Iowa; at MSU.

A fun photo essay from HawkCentral.com: The many faces of Fran McCaffery ? 63 in all. All Fran, all the time.

Chris Ash is the new boss at Rutgers. And, he has changes in store. NJ.com has 10 of Ash?s alterations in slideshow format.

Ash?s office and the weight room will get updates ? the list goes on. Now is the time to ask for changes, when you are still the new guy and excitement is high. The biggest thing for Ash to change: The on-field product. How long will that take?

Are you like me? Eager to see who wins the quarterback battle at Michigan? For some reason, I like Houston transfer John O?Korn.

Mlive.com notes that O'Korn will be eligible for the first time as a Wolverine after transferring to Michigan from Houston prior to the start of last season. O'Korn is, by far, the most experienced quarterback on the team. The former American Athletic Conference freshman of the year threw for 34 touchdowns during his two years at Houston.

"(He) looks like he's sharp, and I do know that in the meeting room he's very engaged and he works very hard at it," Michigan quarterbacks coach Jedd Fisch said last season. "He's got a talented arm. Kind of the things we saw when he was at St. Thomas (Aquinas) when I was at Miami, I remember him then. Then the couple years of film we saw when he was at Houston.?

Hey, hey! Big Ten spring drills begin today with Northwestern taking the lid off the action. There is work to do for a 10-win team. InsideNU.com has been previewing positions. Here is a look at the DBs, which have a lot of potential.

Looks like Nebraska has its new d-line coach, as reports indicate ex-Husker John Parrella will be the man.

Minnesota is still searching for an A.D. Interim boss Beth Goetz would be a good choice, but she downplays her interest.

?At this point, I?ve said that I?m interested in the position and I plan to pursue it,? she said last week. ?We?re going to let the process play out from there.?

The U?s Board of Regents and President Eric Kaler heard recommendations on the search for a new AD last week. They decided to move on with the process that includes hiring a new search firm to locate candidates.

The NFL Combine is upon us. Lots of Big Ten players are there. Pennlive.com wonders which of the five Nittany Lions will tear it up this week as the program has not had a first-round pick in six years.

My money is on Anthony Zettel. The guy is just a beast.