Power Rankings: 9-5 Michigan State jumps up to No. 1 spot 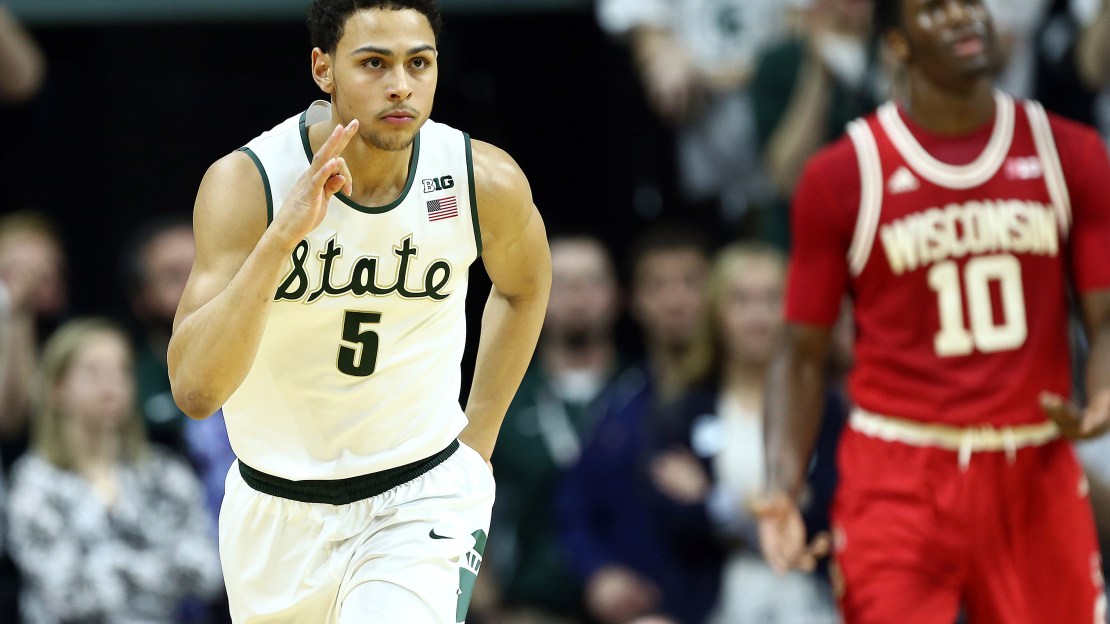 Every week, I sit down and assemble my Big Ten Power Rankings, presented by ArcelorMittal. In the past, I?ve based it solely on what I see. Some of which is potential.

With only two weeks remaining in the regular season, potential has to be considered less and less. It is more about who you are at this moment that will lead you to success or failure in postseason play.

Clearly, potential will play a role in the NCAA tournament for some teams as so much of the tournament is determined by matchups. A team with great potential and the right matchups can certainly make a deep run in March. For now, I?m basing my thoughts on a combination of factors. Who you are at the moment, the pieces (personnel) you have in play, the challenges you pose and face going forward, and whether you?ve already reached your plateau or not.

Here is what I?ve got.

1. Michigan State (22-5, 9-5). Yes, the Spartans are 9-5 in the conference, but they are playing better than anyone (yes, ANYONE) in the country. I also see them closing out the season strong and setting themselves up for a Big Ten tournament and NCAA tournament run.
Last week: 3

2. Indiana (22-6, 12-3). The key for Indiana is to know who they are and simply do what they do. They are one of the most dangerous teams in the country when they find rhythm (offensively) early in the game. Additionally, Thomas Bryant has gotten better playing around the perimeter, which makes them even more effective on the offensive end by opening up driving lanes by pulling shot blockers away from the basket.
Last week: 4

3. Iowa (20-6, 11-3). This team did not peak too early. The pressure of facing every opponent?s best is tougher than anyone realizes. Especially in the Big Ten. Getting the core-5 (starters) going early will help the Hawkeyes regain their balance and will take a lot of pressure and defensive attention off of stars Peter Jok and Jarrod Uthoff.
Last week: 1

4. Maryland (23-5, 11-4). Although the potential is there, the Terps certainly have some issues to fix in the next couple of weeks. I love this team when it picks up full court and pressures, and I think that is something that we?ll see more and more of in the closing stretch. More transition opportunities will help take some pressure off of Melo Trimble having to make plays in the half court.
Last week: 2

5. Wisconsin (17-10, 9-5). While the Badgers had to grind out a tough win against Illinois on Sunday night, they still found a way to rally from 13 points down. Their style allows them to play with anyone in the country, and their ability to get to the foul line will give them the edge in close games. Greg Gard has done a terrific job with this team and I hope he gets to coach Ethan Happ for the next three years. That kid is incredibly developed as a freshman in the Big Ten.
Last week: 6

6. Purdue (21-7, 9-6). The Boilermakers' biggest strength exposes their biggest weakness: Guard play. Opponents have been able to scheme against their dominant size by collapsing on the bigs in the post and scrambling out to limited perimeter players. Additionally, fast-pace and perimeter-oriented offenses (for opponents) is kryptonite to Purdue?s size.
Last week: 5

7. Michigan (19-9, 9-6). The Wolverines are dangerous, but they?ve got a tough stretch to close out conference play. Balance, spacing and good ball movement allow them to beat anyone in the country, however toughness has always been the issue. Getting Duncan Robinson going early is key to their success, as his perimeter shooting opens up the floor for Michigan?s playmakers and finishers.
Last week: 7

8. Ohio State (18-10, 10-5). The Buckeyes have to play Michigan State twice and Iowa to close out the season. Considering the fact that they are not projected to be in the NCAA tournament at the moment, these games are opportunities to get good wins and play themselves into the field in March. The skill and talent is there, but the key for this young team is a a consistent effort for 40 minutes.
Last week: 8

9. Nebraska (14-14, 6-9). We?ve talked about Shavon Shields and Andrew White III all season, and they have lived up to the hype. The addition of Glynn Watson Jr. and Tai Webster as consistent contributors and threats makes this a very tough team to face. Of all the single-bye teams in the Big Ten tournament, the Huskers are the last team I?d want to face on Thursday.
Last week: 9

10. Penn State (14-13, 5-9). I?m putting the Nittany Lions above Northwestern because they compete against everyone they play and they have shown that they can beat some of the best in the conference. They are similar to Nebraska, in the sense that I would not want to have to face this team in the Big Ten Tournament. That's because Pat Chambers and crew don?t seem to fear or give in to anyone.
Last week: 11

11. Northwestern (17-10, 5-9). Losing Vic Law for the season and then Alex Olah for a few weeks hurt this team more than I thought it would. Bryant McIntosh and Tre Demps are such a tough matchup when the latter is playing well. Consistency has been an issue for Demps, though. With Michigan, Rutgers, Penn State and Nebraska left on the schedule, the Wildcats still have a chance to make some noise. They, too, are a tough matchup in Big Ten tourney play.
Last week: 10

12. Illinois (12-15, 4-10). I could talk about all of the injuries that the Illini have faced, but, instead, I want to talk about how tough it is to go against Malcolm Hill. Other than Denzel Valentine, Illinois' star is the most dynamic and versatile player in the conference, and he?ll be in the conversation for Big Ten Player of the Year in 2016-17. The Illini are still dangerous when Hill and Kendrick Nunn get it rolling.
Last week: 12

13. Minnesota (7-19, 1-13). The win at home against Maryland was in some ways a wake-up call for both teams on the floor that night. While it was a bucket of cold water in the face of the Terps, it was validation for the Gophers that they are on the right track. Credit Richard Pitino for making a tough, but necessary, decision to dismiss Carlos Morris in the hopes of controlling the culture of this program moving forward.
Last week: 13

14. Rutgers (6-21, 0-14). The Scarlet Knights are playing with seven scholarship players and are without star point guard Corey Sanders, who has been suspended for two weeks. Yet, they still continue to fight and compete. I give these kids a ton of credit for battling all season with little to no reward. Losing games teaches you how to compete, but at some point it is important to find a way to get a couple of victories under your belt in order to learn how to win in this conference.
Last week: 14