No. 6 Maryland holds off Michigan to snap two-game skid 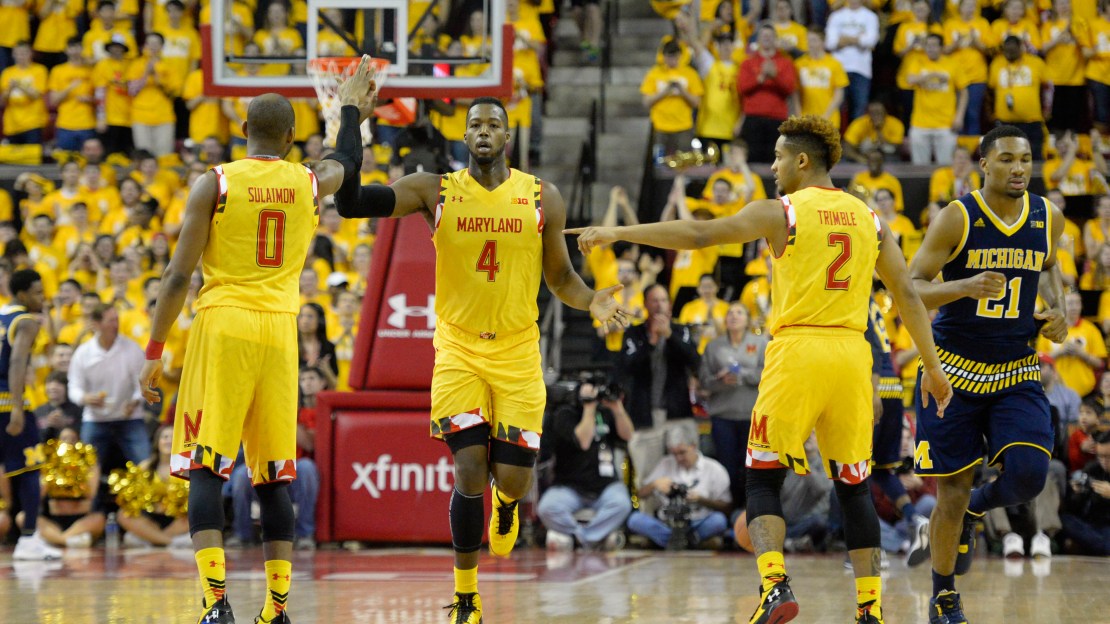 (AP) Robert Carter scored 17 points as sixth-ranked Maryland bounced back from consecutive losses with a 86-82 victory over Michigan on Sunday.

Jake Layman had 16 points, while Melo Trimble finished with 13 for Maryland (23-5, 11-4 Big Ten). Freshman Diamond Stone added 13 points after being suspended for the previous game by Maryland coach Mark Turgeon for a flagrant foul against Wisconsin.

Muhammad-Ali Abdur-Rahkman had 16 points, Derrick Walton Jr. scored 14 and Zak Irvin had 11 points for the Wolverines, who went 13-27 from beyond the arc.

A careless inbound pass by Carter was stolen by Abdur-Rahkman, who made an uncontested easy layup and tied the game at 47 three minutes into the second half.

Maryland, however, regained control as Layman got hot beyond the mark. The senior hit a pair of 3-pointers and the Terrapins led 66-58 with 12 minutes remaining.

Donnal answered with six straight points and the Wolverines trailed 72-70, forcing Maryland to call timeout with 7:08 left. After another Terrapins' turnover on the ensuing possession, Michigan then retook the lead on a layup and free throw by Abdur-Rahkman.

The Terrapins continued to battle through their mistakes. A dunk and layup by Carter provided a 78-75 lead with 3:29 remaining. From there, the Terrapins held on. Walton pushed off and fouled out with 18 seconds left, ending a key possession.

Rasheed Sulaimon then made a pair of three throws before Duncan Robinson answered with a 3-pointer to pull Michigan within 84-82 with 7 seconds left.
Trimble, though, made two free throws in the final seconds to seal the game.

Michigan won the prior matchup 70-67 on Jan. 12. This time, the Terrapins were in control early before the Wolverines took advantage of turnovers to get back in the game.

A 3-pointer and layup by Jaylen Brantley capped a 14-0 run and Maryland led 26-12 midway through the first half. Michigan was held without field goal for just over seven minutes before Walton converted a layup with 7:04 remaining.

The Wolverines, however, tightened their defense and a 3-pointer by Mark Donnal cut the margin to 35-30 during an 11-0 run. Michigan scored 15 points off 12 Maryland turnovers and trailed 41-36 at the break.