There's a reason to cheer for Minnesota's Joey King 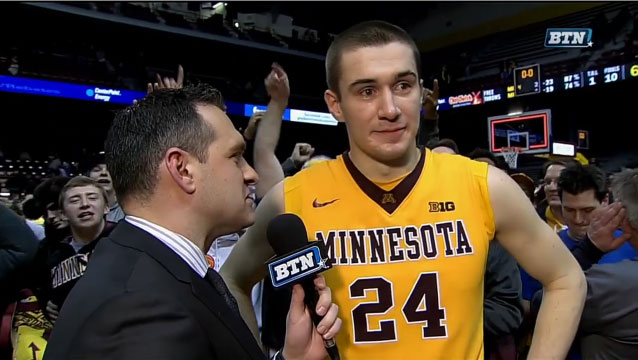 The college basketball world has reason to cheer for Minnesota's Joey King, and it has nothing to do with liking the Gophers' basketball program.

King is a senior. In fact, he is the lone scholarship senior on the Gophers' roster this season.

Last night, King set social media on fire after delivering an emotional interview to BTN's Jon Crispin following Minnesota's 68-63 upset win over No. 6 Maryland. It was the Gophers' first conference win of the season, after starting 0-13 in Big Ten play.

?There?s not too many fans that would come out for an 0-13 team,? said an emotional King following the victory. ?To have the kind of support we?ve had here has been really special.?

Losing stinks, there's no way to sugarcoat it. Yet here is King, fresh off the most memorable game of his career, taking over the internet waves with a beautiful message to everyone who had the pleasure of watching.

"You can't just shut it down and quit," King said.

The best part about that message from King? You could tell he truly meant it.

King isn't an 18 or 19-year old kid playing out his required year of college basketball with his mind on the NBA. He is a 23-year-old senior who defines the popular term "wearing your heart on your sleeve."

King transferred to Minnesota from Drake after his freshman season to be closer to his brother, Erik, who was battling cancer. He has been with Erik every step of the way during his battle with Leukemia, and his health has since improved drastically.

While King hasn't experienced much winning on the court (22-46 conference record in four seasons), he is a winner off of it, standing for everything that is right with college sports.

Fans stormed the court on Thursday night following the Gophers' memorable win, joining King in celebration. Chants of "Joey," "Joey" filled the air at Williams Arena as a sense of jubilation came among coaches, players and fans.

Incredible scene at the Barn as @GopherMBB fans storm the court after @GopherSports' 68-63 upset win over Maryland https://t.co/t1QnCFYq96

"We knew our time was coming," King said following the game. "It just took a little bit longer than expected."

That statement says something about King. It says he's a leader. It says that he gets it. He understands what being a senior on a young college team is all about.

Do you remember your junior or senior year at college? Chances are, they included some of your fondest memories.

In this day and age, there are plenty of college basketball players who never get the opportunity to make those memories. Their college experience is like running a fastbreak. Don't blink, or you'll miss it.

Not King. He's here for all the right reasons, which is why he should be appreciated far beyond what he does on a basketball court. Playing out your college career, don't shut it down and quit despite losing, appreciate those who support you, enjoy your college experience, that's what makes college sports far superior to anything else.

"Wait until people see Joey King's story," I said to myself on Thursday night.

Before last night, not many had. Now, in a more important way, they saw everything he had.