BTN's Shane Sparks: Our look at this weekend's NWCA action 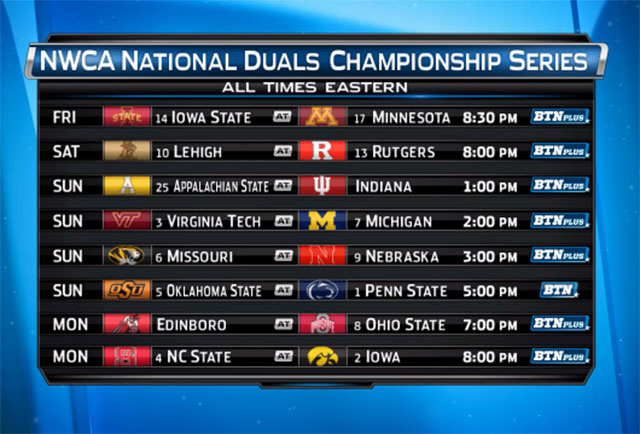 The National Championship Dual series highlights this weekend as eight Big Ten teams host six Division I conference champions from around the country and two wild cards. With their conference tournament next Saturday, the Pac 12 Conference has withdrawn and allowed for Iowa State to enter as the second wildcard selection.

This is going to be a great weekend for college wrestling. In recent years the National Duals has lost its intrigue mainly because not all the top teams in the country were involved and thus leaving a ?lack of credibility? to the championship. This year a format was adopted that is similar to the college football bowl system.

The National Wrestling Coaches Association is on the right track. I still struggle with a tournament that names a ?champion? when the top two teams never meet, but at least the top teams in the country are involved and that's priority number one in my opinion. College wrestling needs more opportunities to really showcase itself and celebrate the sport.

Although not there yet, the National Duals has the potential to do just that.

After beating Lehigh last Friday and Michigan State last Saturday, Penn State locked up the top spot in the rankings. As the highest ranked non-Big Ten school, Oklahoma State will wrestle the Nittany Lions at Rec Hall this Sunday (BTN 5 p.m. ET). This dual boasts six No. 1 ranked guys in the country with Penn State boasting four of those. The Lions have dominated their way to a perfect 15-0 record. The Cowboys have won ten straight and will first wrestle North Carolina tonight before heading to Penn State.

Oklahoma State is 12-2 overall with close early season loses to Iowa and North Carolina State. Penn State is a heavy favorite in this dual. I'm looking forward to a great environment inside Rec Hall with two of the top programs in the country. But I must admit, I'd be more excited for a Penn State vs. UIowa battle.

The Hawkeyes meanwhile will host North Carolina State Monday night in Iowa City. The Wolfpack had the inside track to meet Penn State before falling to Virginia Tech last Friday night. Even with the loss, NC State remained ahead of Virginia Tech in the coaches poll to cement the meeting with Iowa. The Hawkeyes missed Penn State, Ohio State and Michigan this season on their conference schedule and have not had a true test since their opening match against Oklahoma State.

The Wolfpack have had an impressive season under head coach Pat Popolizio highlighted by wins over Oklahoma State and Missouri. Both teams have a handful of highly ranked guys, but they are not at the same weight class. The key match is at 184 with Iowa's No. 10 Sammy Brooks and No. 16 Pete Renda for the Wolfpack. Another match of interest is at 197 with the Hawkyes No. 4 Nathan Burak and NC State's No. 14 Michael Boykin. If the Wolfpack can pull off victories in those two matches I expect things to be very interesting. NC State is anchored by two time NCAA champion Nick Gwiazdowski at heavyweight.

This is a nice test for Iowa heading into the Big Ten Championships in two weeks.

The fans in Ann Arbor are in for a treat as the host Wolverines welcome Virginia Tech on Sunday. The match at 197 between Michigan's No. 6 Max Huntley and the Hokies No. 7 Jared Haught is going to be huge. Another dandy is at heavyweight where Tech's Ty Walz (No.3) collides with Adam Coon (No.4). This dual is going to be exciting!

As I continue typing this article I get more excited. Missouri at Nebraska also has some highly anticipated matchups. I'm jacked up about the battle at 149 pound with No. 3 Lavion Mayes for Missouri and No. 4 Jake Sueflohn for the Huskers. The National Duals champion last year, Missouri has once again put together an impressive season. The Tigers had not dropped a dual in nearly two full years before losing to Oklahoma State in late January and just last week lost a tough one point match to North Carolina State. Missouri is a very balanced team with six guys in the top 10.

This should be a fun weekend for college wrestling fans. This system may not be perfect, but again I am very happy to see the top programs participating. These duals will no doubt create more fan interest and exposure while bringing in many more fans because of the eight different locations. The attendance this year will bury that of years past and that is a big deal.

This is a great improvement in comparison to recent years and I applaud the NWCA for stearing these duals in a different direction. Looking forward to watching the top programs in the country toe the line and of course some great individual matchups that will have seeding implications for the NCAA Championships next month. This weekend has college wrestling fans talking and that buzz is great for the our sport.

All of BTN's wrestling videos are on YouTube now. Use the playlist below for the latest.