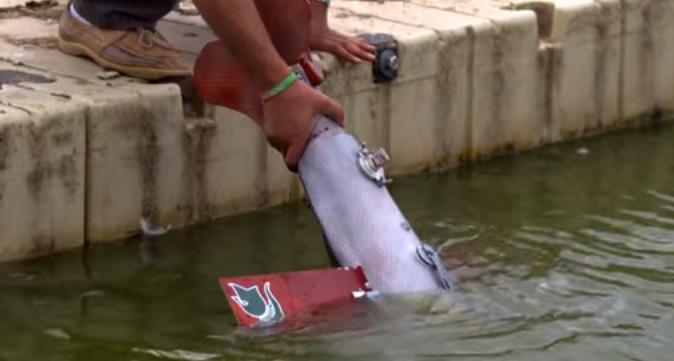 Beneath the waves of Lake Michigan lurks a blood-sucking invader, the dreaded sea lamprey. This aquatic vampire, with no known predators in the region, has decimated populations of lake trout, whitefish and herring.

But there is hope, and it comes in the form of a fish. A robotic fish.

The mechanical maritime creatures are the brainchild of Dr. Xiaobo Tan and his team at Michigan State. They came up with the idea while looking into an affordable, efficient drone system that could monitor the Great Lakes and surrounding waterways.

?When you think about Michigan, you think about the beauty and fun of the Great Lakes,? said Tan, a professor of electrical and computer engineering at Michigan State. ?But it is a big, unknown world, full of risk factors such as invasive species.?

The robotic fish are equipped with tracking software, allowing them to home in on their radio-tagged, flesh-and-blood brethren. And they can work in tandem to increase effectiveness.

?Imagine a network of underwater drones,? Tan said. ?This is going to help us track down invasive species and give us answers.?

Part swimmer, part glider, its dual modes of locomotion are less taxing on the battery. That?s an integral part of the solution, as it affords the fish more time to travel and track wildlife between charges. As it moves, an array of sensors allows the machines to accomplish other tasks, such as testing water quality and chemistry, monitor temperature changes and light penetration, and a host of other variables.

[btn-post-package]Consequently, the robotic fish could be appropriated by researchers in other academic fields looking to carry out studies in large bodies of water. During a trial run in the Kalamazoo River, the team was able to detect elevated oil-particle levels following a 2010 spill, and Tan?s colleagues have used the robotic fish to study algal blooms.

That?s important to Cody Thon, a member of Tan?s team of engineers. Growing up a Michigander, he said some of his best memories were derived from Lake Michigan. This work will help preserve a resource that improves quality of life for millions of people in so many ways.

?With this robot,? he said, ?our goal is to learn more about the Great Lakes, and the more we can learn, the better.?