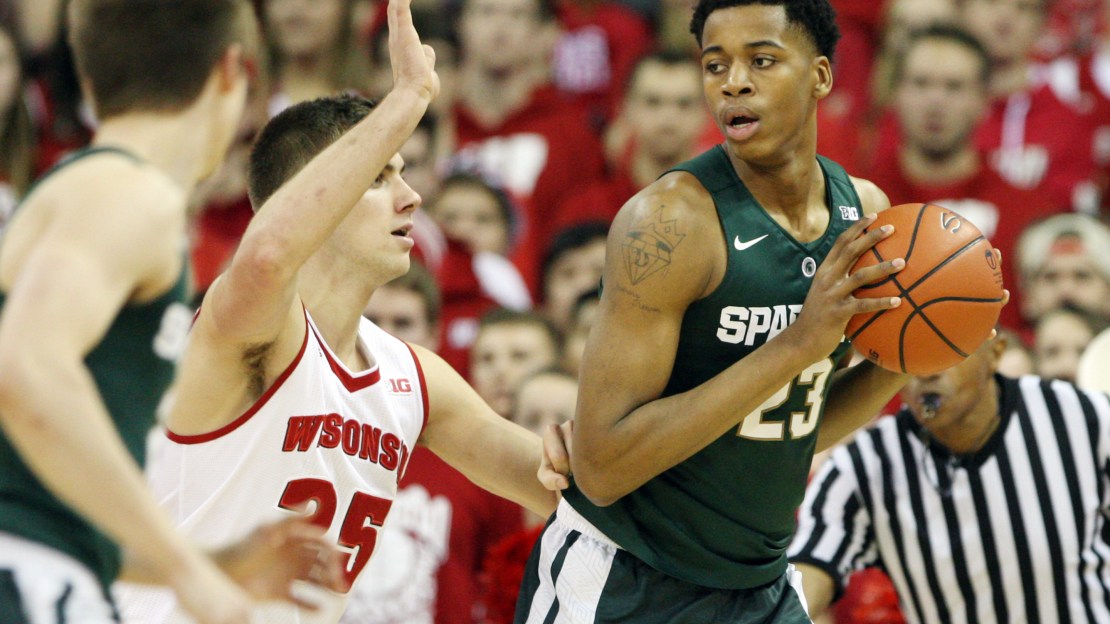 The season is hitting the home stretch. And everyone is chasing Iowa, which sits atop the Big Ten standings a game head of Maryland and Indiana. And, it doesn?t look like the Hawkeyes are in peril of losing this week.

[ MORE: Power Rankings | Player Rankings | Game Rankings | Bracketology | Debate It: Player of the Year? | Best of the week that was | Standings | Stats | Scoreboard | Polls | Win a trip to B1G tourney ]

Indiana, Iowa, Maryland, Michigan State and Purdue have all reached the 20-wins plateau. Michigan enters tonight?s game at Ohio State with 19 victories. The Big Ten has seen at least six teams post 20 or more wins in each of the last nine seasons.

Here?s a ranking of this week?s games.

1. Wisconsin at Michigan State, Thursday. How sweet is this matchup? The Badgers enter the week as the hottest team in the Big Ten, winners of seven in a row, including a win vs. the Spartans last month, as they push toward an NCAA bid. This didn?t seem likely a month ago when UW was 9-9 overall and 1-4 in the Big Ten. The Spartans also are playing well, going 5-1 since a three-game skid. And the lone loss was by one point at Purdue in OT. How good is Denzel Valentine? He leads the Big Ten with 19.5 points and 7.1 assists per game. The last player to pace the conference in both categories was Iowa's Andre Woolridge with 20.2 points and 6.0 assists per outing during the 1996-97 season.

2. Purdue at Indiana, Saturday. One of the sports? best rivalries begins anew. This is the only meeting between these clubs. The Boilers have won the last three encounters. This will be a good contrast in styles between physical Purdue and finesse Indiana. It will be fascinating to see which style prevails Saturday in Bloomington.

3. Michigan at Ohio State, Tuesday. The hardwood version of this rivalry lacks the intensity of the football version. Still, it?s pretty intense. And there is a lot on the line for each squad. The Wolverines are looking to add another solid win to their NCAA resume. The Buckeyes are trying to crawl onto the NCAA bubble. More motivation: 2010 national player of the year Evan Turner will be honored at halftime.

Ohio State will hang @thekidet's No. 21 in the rafters at halftime Tuesday vs. Michigan » https://t.co/SJFoNNFobU https://t.co/2M1NQZkhCP

4. Michigan at Maryland, Sunday. The last time the Terps played on their own court, they had their program-record 27-game home winning streak snapped and suffered their first Big Ten home defeat. Maryland?s wiggle room is minimal if it wants to keep pace in the chase for the league title. The Terrapins also have revenge on their minds, as they lost in Ann Arbor earlier this season.

5. Iowa at Penn State, Wednesday. This is a potential trapdoor games for the Hawkeyes, who begin the week along atop the Big Ten standings. Could Iowa really get tripped up in State College? Indiana has already gone down at Penn State, for what it's worth.

6. Nebraska at Indiana, Wednesday. Two of the Big Ten?s most prolific offensive teams, this could be a fun matchup with the winner notching over 80 points. The Hoosiers need to protect their home court to keep pace with Big Ten leader Iowa. The good news for Tom Crean?s crew: Indiana is unbeaten in Assembly Hall.

7. Ohio State at Nebraska, Sunday. These are two teams struggling for postseason relevancy. The Cornhuskers have endured their ups and downs in Lincoln. Still, this squad has some scoring ability that makes it dangerous each time out. NU?s Glynn Watson Jr. was the league freshman of the week, averaging 12.5 points and 1.5 steals in the Huskers? split vs. Wisconsin and Penn State.

8. Maryland at Minnesota, Thursday. Williams Arena always is a tough venue. And this is a desperate Golden Gophers squad that is playing better recently despite still looking for its first Big Ten triumph. The Terps will be without suspended big man Diamond Stone.

9. Northwestern at Purdue, Tuesday. The Boilermakers? Big Ten title dreams are all but dead. At this point, it?s all about trying to finish strong and gain momentum for the postseason. Purdue needs a big win to give it mojo for a challenging stretch run.

10. Penn State at Rutgers, Saturday. The Nittany Lions are trying to make a push for a postseason berth, any postseason berth. That basically makes this a must-win for Penn State as it faces a Scarlet Knights squad that last won a Big Ten game in January 2015 and is without recently suspended star Corey Sanders.

11. Illinois at Wisconsin, Sunday. This is a tale of two very different teams. The Fighting Illini have been undone by a series of injuries that have compromised their roster. The Badgers enter the week as the hottest team in the Big Ten, winners of seven in a row.

12. Rutgers at Illinois, Tuesday. Two teams desperate to taste victory in this one. The Scarlet Knights will be without star freshman Corey Sanders, who will miss the next four games after being suspended for breaking team rules.