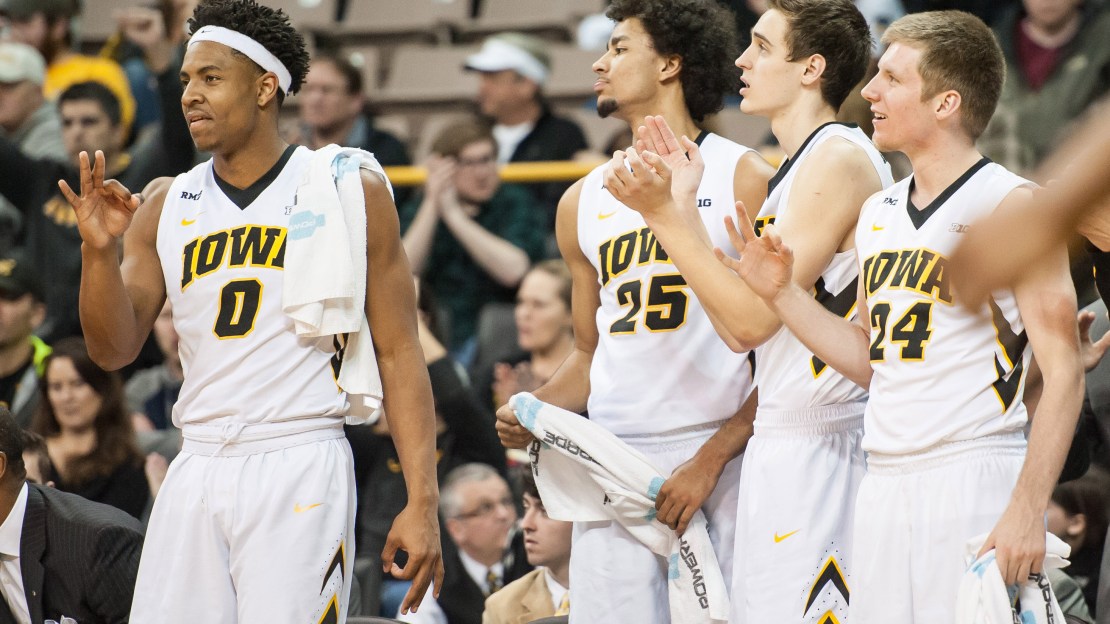 There is a lot to like about Iowa, which sits alone atop the Big Ten standings. But are you worried about the sometime spotty production of the bench?

The last two games, the Hawkeye bench has been outscored 55-6. HawkCentral.com points out that Iowa certainly will need more from sophomore Dom Uhl and freshmen Nicholas Baer, Ahmad Wagner and Brady Ellingson down the stretch. That quartet went scoreless in Thursday?s 85-78 loss at No. 22 Indiana and combined for six points Sunday.

?I know those guys are working hard every single day in practice,? said Mike Gesell. ?They?re not doing anything different. They?ve just got to continue to play their games, and their points are going to come.?

Many people had an opinion on Maryland?s Diamond Stone?s flagrant 1 vs. Wisconsin. But Badger players were mum on the subject of Stone, who is a native of Wisconsin. Probably a good move to take the high road.

?I have no idea what you?re talking about,? Nigel Hayes said afterwards.

This Indiana hoops team is hard to figure out. You just don?t which team will show up from game to game.

It seems IU can beat anyone (Iowa) and lose to anyone (Penn State). What?s that mean for the NCAA tourney? The Hoosiers could be one-and-done ? or maybe an Elite Eight team.

Ohio State? In the NCAA tourney? The Buckeyes' schedule still gives them a chance.

Clearly, the numbers aren't good enough right now, notes Cleveland.com, but the Buckeyes have five games left. Four of those are against teams ranked in the RPI Top 50, and three of those are at home. If Ohio State gets two wins in the next five games, the Buckeyes would finish 10-8 in the Big Ten. The last time a team finished 10-8 in the Big Ten in didn't make the NCAA Tournament was 2009-10, when Illinois finished 18-13 (10-8). So, you see, there?s hope. But, it?s a longshot for OSU.

The struggles of Minnesota are well-documented. A key to success? Landing in-state talent, which is something Iowa has done in its rise.

Richard Pitino says there?s hope for the future because of Minnesota natives playing next season. Marcus Fuller of the Pioneer Press points out that the 2016 class has Hopkins guard Amir Coffey and Rochester John Marshall wing Michael Hurt, along with Arkansas native Eric Curry. Transfers Davonte Fitzgerald and Reggie Lynch are also eligible next season. But Lynch, a 6-foot-10 Edina, Minn. native, could be similar to Uthoff in a Division I transfer who decided to come back and became the team?s best player. What Adam Woodbury, Peter Jok and Jarrod Uthoff did for the Hawkeyes, Pitino hopes Coffey, Hurt and Lynch can do for the Gophers in the next two years.

New Rutgers leaders have met with major donors and football alums. And, optimism abounds. It?s about bringing back into the fold past players. And, it?s a good idea.

A.D. Patrick Hobbs and coach Chris Ash have created momentum in their first months on the job, creating a sense of optimism that has been lacking in recent years.

"The energy was amazing," said Bobbi Brown, the founder of an enormously successful cosmetics company to NJ.com. "You felt that this is the start of something really big. Between the president, the coach, the athletic director and all the former players, everybody is pretty excited. We're very optimistic. I think this is going to be a big turnaround. I really feel that."

The Michigan offensive line has been an issue for a while. But the unit may be coming on as Year Two under Jim Harbaugh takes hold. But the loss of center Graham Glasgow creates a chasm.

Still, having guys like Mason Cole, Patrick Kugler, Erik Magnuson, Kyle Kalis and Ben Braden back is a good starting point for 2016. And Grant Newsome is an intriguing prospect who played as a true freshman. This unit is getting better.

Pennlive.com has a good story on what it?s like to be a mid-year enrollee.

I get the whole idea of trying to get a jump on things. But I think these kids are missing a fun time in their life they never will get back-that last semester of high school. It?s a fun, magical time.

Michigan State has a yawning hole at quarterback with Connor Cook gone. It looks like senior Tyler O?Connor will begin spring drills No. 1 under center with Damion Terry in the running, too, among others. But Mark Dantonio says he won?t name a starter until September. So, buckle up ? this will be a long ride.

"Certainly, Tyler O'Connor and Damion Terry have played in games, they performed well in games, so we can see how everyone plays relative to everybody else as we go through spring practice," Dantonio said at the sixth annual Winter Tailgate.