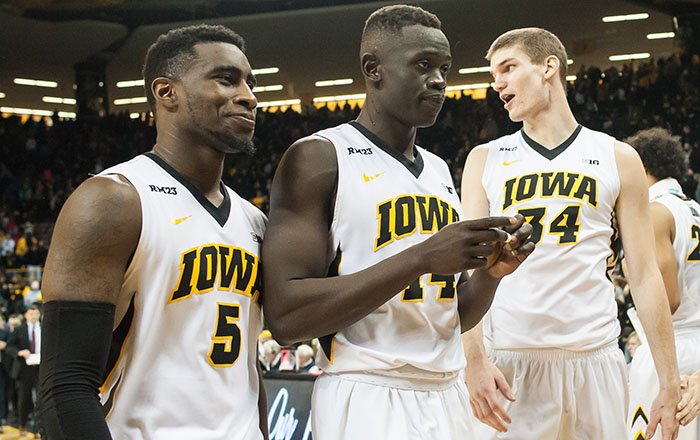 Sunday night on "B1G Basketball & Beyond," Mike DeCourcy brought up the point that now that we have reached the mid-point of February it is unofficially acceptable to begin to discuss the ?Bubble.?

Initially, I would have felt that our Big Ten Bubble Team would be Ohio State, but Wisconsin continues to make statements and make a case that they belong in the NCAA tournament.

Here?s where I see the Big Ten at the moment. Just remember, I base my Big Ten Power Rankings, presented by ArcelorMittal, on what I see and what I think. It is no way means that I am right. Chances are, this list will see drastic changes come March, and that?s what makes this game so great.

1. Iowa (20-5, 11-2). The Hawkeyes aren?t perfect, but their consistency has gotten them in position to close out conference play strong and win the Big Ten. Peter Jok and Jarrod Uthoff are combining to average 40.6 points over the last five games, which is tremendous but also gives me cause for pause. Finding balance (again) will be a key to their postseason success.
Last week: 1

2. Maryland (22-4, 10-3). The Terrapins have two things that make them incredibly dangerous at the moment: 1. They have the biggest room for improvement when it comes to tempo, pace and execution; 2. they also have the highest ceiling of any team in college basketball. Melo Trimble should look to push the tempo in transition and find opportunities to get in ball screen situations with Robert Carter Jr., who has shown the ability to pick-and-pop for 3s.
Last week: 2

3. Michigan State (21-5, 8-5). The Spartans have faced adversity with numerous key injuries this season, and with Tum Tum Nairn coming back, Tom Izzo will have this team ready for another run in March. Nairn is not be a scorer, but he takes care of the basketball, creates scoring opportunities for teammates and is the best defender on the floor. He also allows Valentine to make plays from the wing position, which takes a lot of pressure off the star senior and applies it to the opposing defense.
Last week: 3

4. Indiana (20-6, 10-3). The Hoosiers have quite a tough stretch coming up, and it all starts with them having the opportunity to take care of business against a much-improved Nebraska team. After that, it's time to host rival Purdue. Three of the Hoosiers? last five games are against top 25 opponents, a span in which they?ll either justify their position near the top of the Big Ten standings or fall toward the middle of the pack.
Last week: 5

5. Purdue (20-6, 8-5). Although the Boilermakers have issues to correct around the perimeter, they still have the potential because of their dominant size. I am very interested to see how they handle Indiana's perimeter-oriented offense. If they can?t slow down Yogi Ferrell and the potential 3-point barrage, a matchup against a guard-dominated opponent in the early rounds of the NCAA tournament could lead to their demise.
Last week: 4

6. Wisconsin (16-9, 8-4). I never would have imagined this after calling the Western Illinois game in November. The truth is, this is a completely different team. The personnel may be the same, but how they?re utilized is different. The Badgers find a way to be in every game by dictating tempo, limiting possessions and getting to the foul line, by creating iso situations because of good floor spacing. Toss out the non-conference schedule, and this in an NCAA tournament team.
Last week: 6

7. Michigan (19-7, 9-4). The win over Purdue was a good one for a number of reasons. Most importantly, it was vs. a top 25 team and it came against a much bigger and more physical team in a ?grind-it-out? kind of game. This was the toughest I?ve seen the Wolverines play all season. The real wild-card (in my opinion) is how this team responds to getting Caris LeVert back in a ?leading man? role. Balance will still be important for their success.
Last week: 7

8. Ohio State (16-10, 8-5). The Buckeyes have to find a way to win the next two games, against Michigan and Nebraska, because they close out the season with Michigan State, Iowa and then Michigan State again on the road. Beating Michigan and Nebraska would be good wins and would give the Buckeyes necessary momentum to make a late season and Big Ten tourney run. The potential is certainly there. Consistency has been the issue.
Last week: 8

9. Nebraska (14-12, 6-7). The Huskers are a very dangerous team. Andrew White III and Shavon Shields are terrific in every way. Their skill sets compliment each other well, too. White spaces the floor with his 3-point shooting capability, and Shields abuses opponents with attacks to the rim and unstoppable floaters in the lane. The key is continuing to get consistent play from Glynn Watson Jr. and Tai Webster. I still think this team has one or two upsets left.
Last week: 9

10. Northwestern (17-9, 5-8). When Tre Demps and Bryant McIntosh get it going on the offensive end, this is a tough team to stop. When Demps does not shoot it well, defenses are able to key on McIntosh and limit their offensive attack. Scottie Lindsey has the potential to be a high-level player. His athleticism and shot make him a great third option, but he has to continue to be more assertive on both ends of the court.
Last week: 10

11. Penn State (12-13, 3-9). Every team in the conference has the same things to say about Patrick Chambers and the Nittany Lions: They always compete, and they always give themselves a chance to win the game. Shep Garner and Brandon Taylor make this team even more dangerous. If the Nittany Lions play the entire game like they play the last 5-10 minutes of games, they?ll win more in the Big Ten. Playing fast and playing with a sense of urgency is the way to go for this team.
Last week: 11

12. Illinois (11-14, 3-9). Like Penn State, the Illini are a tough team to match up against. Injuries have limited their potential this season, but the talent of Malcolm Hill cannot go unnoticed. In the Northwestern-Illinois game, I made the comment that Hill is the best player in the country that no one is talking about. He can play any position on the floor, and he certainly does at times. He is a kid that anyone can root for.
Last week: 12

13. Minnesota (6-19, 0-13). Nate Mason and Jordan Murphy are proof that the future can be bright for the Gophers. The talent is there, and with a good recruiting class coming in, expectations will be much higher than they were for this season. Richard Pitino?s team has looked much better over the past couple of weeks, competing at a much higher level and keeping themselves in tough games.
Last week: 13