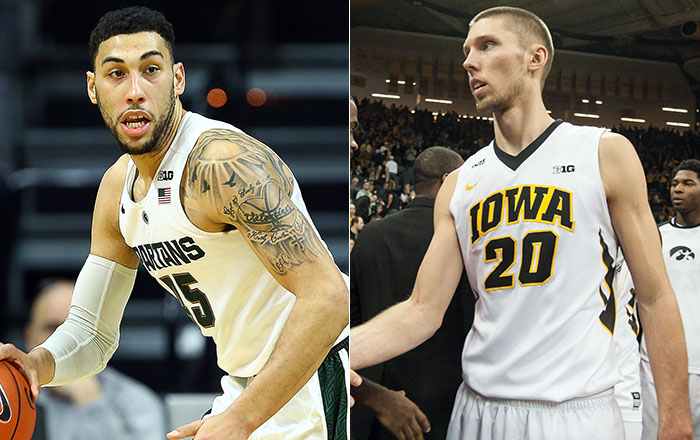 Three weeks remain, and the race for Big Ten Player of the Year looks more and more like a great two-man battle.

[ MORE: Follow @BTNJonCrispin | Power Rankings | Player Rankings | Debate It: Player of the Year? | Best of the week that was | Standings | Stats | Scoreboard | Polls | Win a trip to B1G tourney ]

Both stars are enjoying wildly successful seasons, compiling impressive across-the-board numbers. But, who is the leader as the Big Ten schedule hits the stretch run?

Here's what they said:

JON CRISPIN: I've got to with Denzel Valentine. There's no one more valuable to his team. This guy makes his teammates better, he makes his team better. He is Tom Izzo on the floor; he may not be as emotional as Izzo, but he's a fighter, he's a warrior, he brings out the best in his teammates. So, if I'm picking my team, I'm taking him first. If I'm looking for the best player in the conference, I'm taking Denzel Valentine, and that's not a knock on anyone else.

MIKE DECOURCY: I believe that it's a league award, and the best player on the best team, having the most impact on winning conference right now is Jarrod Uthoff of Iowa. He affects the game at both ends; he's a terrific, versatile offensive player, hurts you inside and out and in transition. And defensively, he's a destructive player. He blocks shots, leading the league in that category – very unusual for a player to be a power forward with his skill set on offense and also blocking shots in the way that he does. And again Iowa is leading the league, they're in great position to win the conference, so, as long as that's the case, Jarrod Uthoff is my guy.