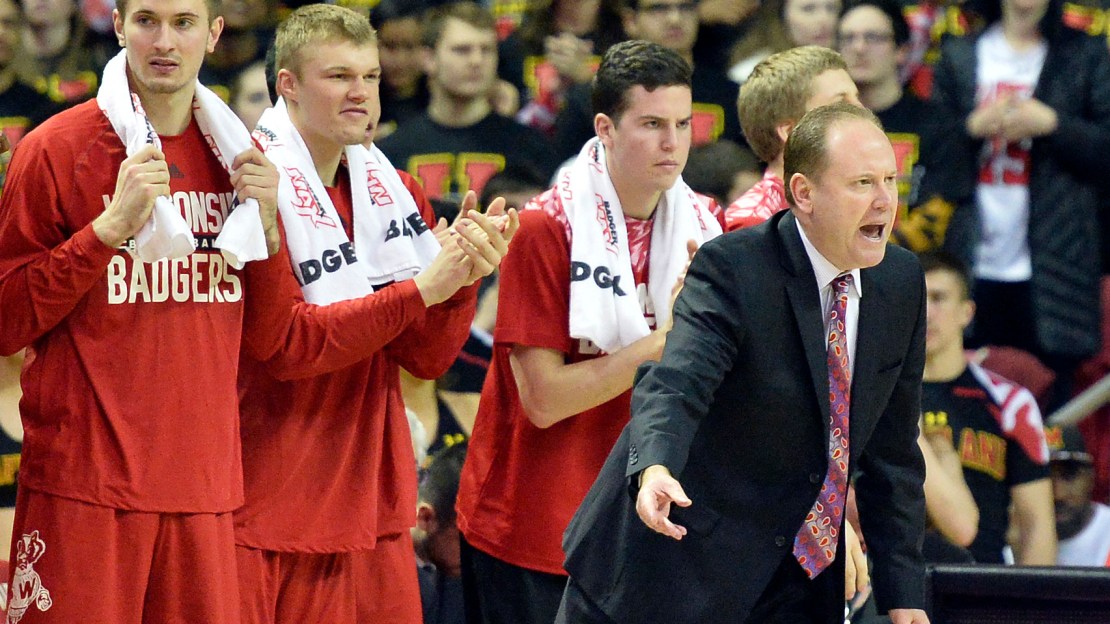 An eventful week, with Maryland seeing a long home winning streak end, Indiana enduring highs (win vs. Iowa) and lows (loss at Michigan State) and Wisconsin emerging as the hottest team. When the dust settled, the Hawkeyes stood alone atop the Big Ten.

Here?s a look back at the week that was.

Best win: Wisconsin at No. 2 Maryland. No Big Ten team had ever won a conference game at Maryland. Until Saturday night, that is, when Nigel Hayes and company went into the Xfinity Center and claimed their seventh consecutive win, while snapping the Terrapins' program-record 27-game home winning streak.

Best stat line: Denzel Valentine had 30 points, 13 assists and only one turnover to help No. 8 Michigan State pull away to beat Indiana 88-69 Sunday-which was Valentine's Day. The senior hit 11-of-19 shots with five rebounds, three steals and a block, to boot. Purdue's A.J. Hammons (Tuesday vs. Michigan State), Nebraska's Andrew White III (Saturday vs. Penn State) and Iowa's Jarrod Uthoff (Sunday vs. Minnesota) deserve some love, as well.

Best play: Derrick Walton Jr. late And-1 vs. Purdue. Talk about clutch plays, this was exactly that. Walton was 0-of-9 from the field when he broke off this pretty crossover and challenged A.J. Hammons, the Big Ten's block leader the last three seasons, en route to registering the huge And-1.

Best dunk: O.G. Anunoby at Michigan State. It came in a loss, what turned out to be a blowout loss, but the Indiana freshman's posterizing dunk was something special.

Best pass: Eron Harris no-look dime vs. Indiana. What's better than a no-look pass? A no-look pass while falling down. Harris did this Sunday, finding Matt Costello for the easy dunk.

Best stat: Michigan outrebounds Purdue. The Wolverines became the first team to outrebound the Boilermakers (39-35) this season Saturday. Purdue had been the only team in the country that hadn't been outrebounded.

Best reax: Matt Costello vs. Indiana. The Michigan State senior entered the week with zero career 3-pointers. He hit his first trey in Tuesday's loss at Purdue. His second one came in Sunday's win vs. Indiana, and he celebrated it in true Matt Costello fashion.

Best reax, Part II: Fran McCaffery vs. Minnesota. When a team leads in the final seconds, it never wants to foul, much less foul the shooter. The Hawkeyes did that in Sunday night's narrow victory over Minnesota, and McCaffery's reaction was priceless.

Best celebration: Wisconsin at Maryland. The Big Ten hottest team, winners of seven straight, was in the mood to celebrate Saturday night, and for good reason. Wisconsin had just handed No. 2 Maryland its first Big Ten home loss and snapped the Terrapins' program-record 27-game home winning streak. The Badgers mobbed the much-improved Vitto Brown, who scored a career-high 21 points, and also celebrated with their interim coach.

"I told you we were gonna celebrate!"https://t.co/VvCuEZHq43

Did you see this? Maryland pulled off Flash Mob IV during a timeout Saturday night, and it was every bit as good as last year's edition.

Stock up: Michigan. The Wolverines took it on the chin the week before, losing at home to Indiana and Michigan State in humbling fashion. But Michigan rebounded nicely this week with wins at Minnesota and vs. Purdue.

Stock down: Purdue. The Boilermakers hung on for an OT win at home on Tuesday before blowing yet another second-half lead, this time at Michigan, on Saturday. This may end up being a 10-8 or 9-9 Big Ten team, as a lack of quality perimeter/guard play remains an issue. Is there a go-to guy?

Biggest surprise: Wisconsin. The Badgers are the hottest team in the Big Ten, ripping off seven wins in a row. They closed the week with a monster victory at Maryland, taking a 70-57 decision that knocked the Terps from a share of the league lead. This team just might make the Big Dance.

Biggest disappointment: Maryland. The Terrapins aren?t unbeatable at home after all, as they fell hard (70-57) in the Xfinity Center to Wisconsin on Saturday. The loss ended a school-record 27-game home winning streak and was Maryland?s first Big Ten defeat in College Park since joining the league. The setback also knocked the Terrapins from a first-place tie.

Iowa?s Peter Jok tallied 27 points and Jarrod Uthoff scored 24 with 15 rebounds and six blocks in a 75-71 win vs. Minnesota on Sunday as the Hawkeyes moved to 11-2 in league play and into sole possession of first place.

Denzel Valentine registered 30 points, five rebounds, 13 assists, one block and three steals, to go along with just one turnover, and Matt Costello added 22 points, on 10-of-12 from the field, 11 rebounds and three blocks to lead No. 8 Michigan State past Indiana on Sunday.

Nebraska?s Andrew White III had career highs with six 3-pointers and 35 points, with 18 coming during a 39-7 run that carried the Cornhuskers to a 70-54 victory over Penn State on Saturday.

Derrick Walton Jr. sparked Michigan's strong start with 19 of his career-high 26 points in the first half, and the Wolverines escaped with an 82-74 win on Wednesday that gave the Gophers their 13th consecutive loss.

Yogi Ferrell scored 14 points and Troy Williams added 13 and Indiana rallied to upset No. 4 Iowa 85-78 on Thursday night after blowing a big lead.

Maryland?s Diamond Stone created a buzz when he appeared to shove the face of Wisconsin?s Vitto Brown into the court on purpose. Stone was whistled for a Flagrant 1 foul, but some felt it should have been a Flagrant 2, which would have resulted in an ejection.

The Buckeyes are 139-51 all-time when two players record double-doubles in the same game.

The Scarlet Knights have lost 26 straight Big Ten games and 27 including the conference tournament.

The Boilermakers led by 18 in the second half and still almost lost to Michigan State on Tuesday before prevailing 82-81 in overtime. Earlier this season, Purdue blew a 17-point lead at home to Iowa and lost, 70-63.

Wisconsin has won eight of its last 11 games against top 5 teams.

Purdue?s win over No. 9 Michigan State on Tuesday was its first over a Top 10 team since 2011.

The Nittany Lions haven't won consecutive games since beating Louisiana-Monroe and Drexel in December, the first two games of a three-game win streak

Caris LeVert returned to action for the first time since Dec. 30 on Saturday, but he failed to score in 11 minutes, all in the first, in a win vs. Purdue.

The Cornhuskers' 61 points at Wisconsin on Wednesday were their lowest output in a Big Ten game this season; they came in averaging 75.0 points per game in conference play.

The Hoosiers are 14-0 at home and have won all but one game by six or more points in Assembly Hall.

"I just said, `Drew, this is why we recruited you – this game, this moment. We need you.' "
Nebraska coach Tim Miles, after Andrew White III tallied 35 points in a win vs. Penn State on Saturday with Shavon Shields out with injury.

"At some point here, come on. Let's get some wins." – Minnesota?s Richard Pitino, after the Gophers suffered their 13th loss in a row on Wednesday vs. Michigan.

"This is first team I've ever had in 16 years as a head coach that actually practiced harder this morning at shoot-around at 9 o'clock, than we played in the game today, for whatever reason. But we got what we came for and that was the win. We did not play smart today." – Ohio State?s Thad Matta, after the Buckeyes? win on Saturday at Rutgers

"I think we grew up a lot today as a team." – Wolverines coach John Beilein, after his team rallied for a win vs. Purdue on Saturday

"Everyone in the program challenged me saying, `You've got a big job to do.'" – Michigan State's Eron Harris, on guarding Indiana PG Yogi Ferrell