Dienhart: These 10 players leave the biggest shoes to fill 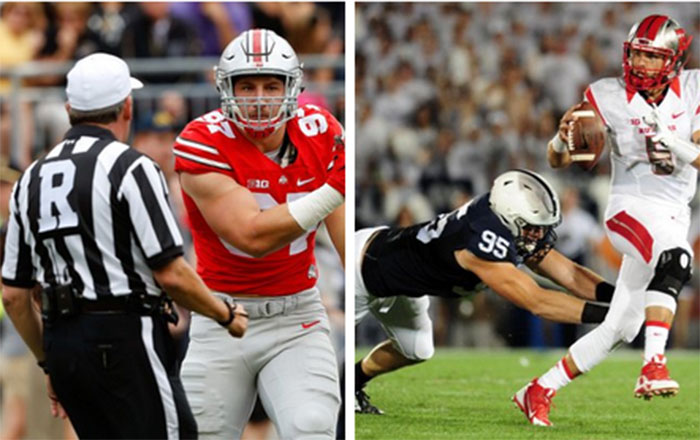 Spring practices aren?t that far away from starting.

In fact, Northwestern will be the first Big Ten school to begin, kicking off drills on Feb. 23. Michigan soon follows with a Feb. 29 beginning.

Here is a look at the 10 biggest shoes to fill around the conference.

1. DE Joey Bosa, Ohio State. He declared for the draft after winning Big Ten Defensive Lineman of the Year honors. Bosa had just five sacks but was fourth in the Big Ten in tackles for loss with 16. His numbers were modest, but his presence created opportunities for teammates to make plays, as Bosa helped OSU have the No. 2 scoring defense in the Big Ten (15.1 ppg).

3. OT Jack Conklin, Michigan State. He enjoyed an amazing career that saw him arrive in East Lansing as a walk-on and leave a year early for the NFL after garnering All-American honors. Conklin allowed only four sacks in 38 career games and recorded more than 235 career knockdowns.

4. QB Connor Cook, Michigan State. Arguably the greatest quarterback in school history, Cook leaves with almost every significant passing record-and lots of big wins; the most ever for a Spartan signal-caller (34). The 2015 Big Ten QB of the Year and Unitas Award winner, Cook won two Big Ten titles and guided the program to its first playoff appearance to go along with 71 career TD passes and 9,217 yards passing.

5. DE Carl Nassib, Penn State. An amazing story, Nassib arrived at Penn State as a preferred walk-on. He left as an All-American who earned 2015 Big Ten Defensive Player of the Year honors and won the Lombardi and Hendricks Awards. Nassib led the nation in sacks (15.5) and was 11th in tackles for loss (19.5). He was a true difference maker off the edge.

6. LB Joe Schobert, Wisconsin. A true playmaker with a nose for the ball, Schobert earned Big Ten Linebacker of the Year honors. He led the team with 9.5 sacks and 19.5 tackles for loss, second in the Big Ten. A former walk-on, Schobert was a whirling dervish who had a nose for the ball and often was unblockable.

7. DE Yannick Ngakoue, Maryland. A lightning-quick pass rusher off the edge, Ngakoue ranked second in the Big Ten in sacks with 13.5, which set a school single-season standard. He also had 15 tackles for loss and earned consensus first-team All-Big Ten honors. Ngakoue opted to turn pro early.

8. DE Shilique Calhoun, Michigan State. He concluded a stellar career with second-team All-American honors in addition to consensus first-team All-Big Ten accolades. Calhoun was one of only eight Spartans in program history and the first defensive lineman to earn first-team All-Big Ten honors three times (2013-15). He had 127 career tackles, including 43.5 for losses (267 yards) with 27 sacks (211 yards).