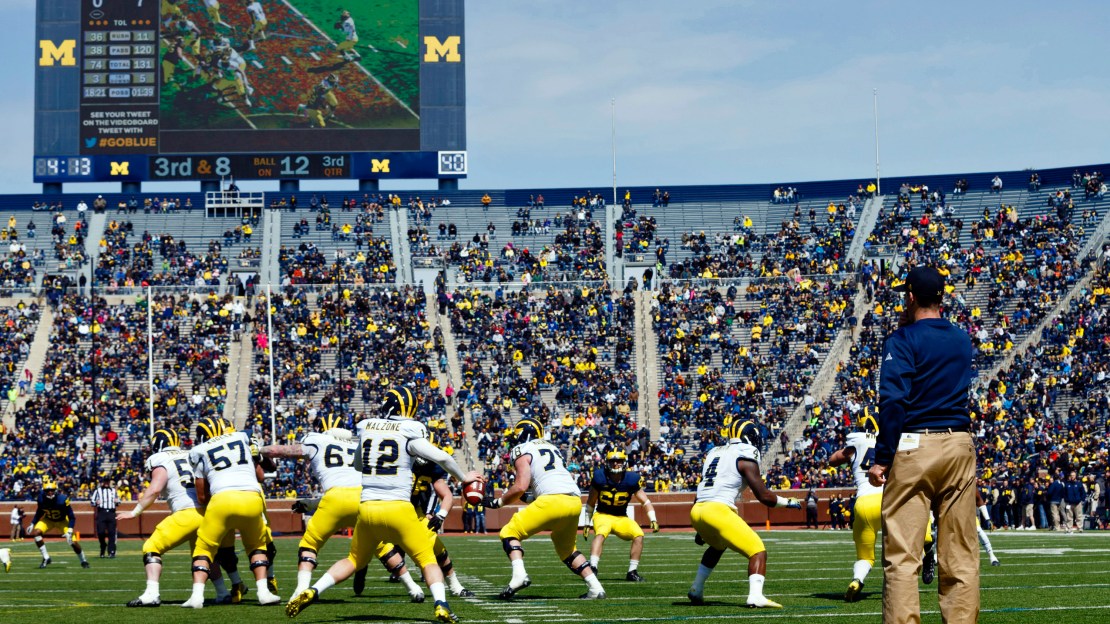 News flash: Jim Harbaugh is in the news again. It seems his idea to conduct spring drills in Florida has raised the ire of SEC commissioner Greg Sankey, who wants to block the move. Oh, he has "reasons." But he never mentions the biggest reason why he objects: Sankey doesn?t want Michigan on his turf to gain a recruiting edge.

Just say it, Mr. Commissioner. It?s no big whoop. We all know it.

I give Harbaugh credit for continually pushing the envelope to improve his program. That?s what it?s all about. And his idea isn?t breaking any rules. So, well, if the Florida Gators want to have spring drills in Michigan, I am sure Harbaugh won?t care.

C?mon on up, Gators! Michigan is great in April!

On a related note, yes, Signing Day was last week, but the news still reverberates. Greg Pickel of Pennlive.com has a good breakdown on Penn State?s class: instant impact, biggest get, biggest loss, etc. Seeing Philadelphia product Karamo Dioubate pick Temple (Temple!) over the Nittany Lions was a stunner. He even played a big position of need for PSU: DT. Oh, well. Win some, lose some. This still was a nice talent haul for Penn State.

Speaking of recruiting classes, expect one of Iowa?s incoming running backs– Toren Young and Toks Akinribade–to play this fall even with guys like LeShun Daniels, Akrum Wadley, Derrick Mitchell and Eric Graham back.

More recruiting: Northwestern still continues to whip Illinois when it comes to in-state recruiting. Pat Fitzgerald only pulled two recruits from the state of Illinois in 2016, but the Wildcats still beat the Illini when the two programs went head-to-head. According to 247Sports, Northwestern and Illinois offered scholarships to 45 of the same Class of 2016 players. Of those 45, 38 committed to out-of-state schools, six committed to Northwestern, and one committed to Illinois. That's significant.

A look by the numbers at Nebraska?s class from Omaha.com. This number is stupefying: 1,000,049: Amount, in dollars, Nebraska has budgeted for recruiting during the 2015-16 fiscal year. That number has doubled in the last five years. How high will this number go?

And the search for an AD at Illinois continues.

The Champaign News-Gazette says mum's still the official word on the athletic director search, though interim Chancellor Barbara Wilson says an announcement "should be coming soon." Speaking after earlier this week at a campus senate meeting, Wilson declined to say whether interviews are completed or provide a more specific timetable for the decision.

When does a loss feel like a win? When you rally from 16 down at halftime and fall in OT. That was Michigan State?s fate at Purdue last night. That ended a four-game winning streak for MSU. But, it didn?t cool them off. This still may be the best team in the Big Ten.

What to make of the Boilermakers, who blew a 17-point halftime lead at home to Iowa earlier this season and lost?

Nice publicity stunt by Adidas, which on Tuesday announced a $1 million bonus to any player at the NFL Draft Combine who breaks the combine's 40-yard dash record of 4.24 seconds. Could Braxton Miller get the loot?

The loss at Penn State for Indiana on Saturday hurt the Hoosiers? NCAA hopes.

IndyStar.com notes that IU plays four games, at home to Iowa, Purdue and Nebraska, and at Michigan State. That?s one very winnable home game against the Cornhuskers, plus three chances at wins against teams in the KenPom top 15. Dodging defeat against Nebraska would probably ensure Indiana doesn't take serious damage from that stretch, but the other three games present opportunities the Hoosiers would be wise to capitalize on. So the great challenge of Indiana's back loaded Big Ten schedule also could prove an opportunity. The Hoosiers need high-quality wins, and the next three weeks offer plenty of chances to get a few. Chances IU must take advantage of. A 3-1 mark is mandatory. A 2-2 record? Or anything worse?

Let?s not even go there.

These are not good times for former Wisconsin star RB Montee Ball. Prosecutors charged Ball on Monday with disorderly conduct, a misdemeanor, for an incident at a downtown Madison hotel early Friday. The woman told police she and Ball were arguing when he threw her in the air and she landed on a table, cutting her leg. A criminal complaint says Ball also was charged with misdemeanor battery for allegedly striking the woman on the face five days earlier.