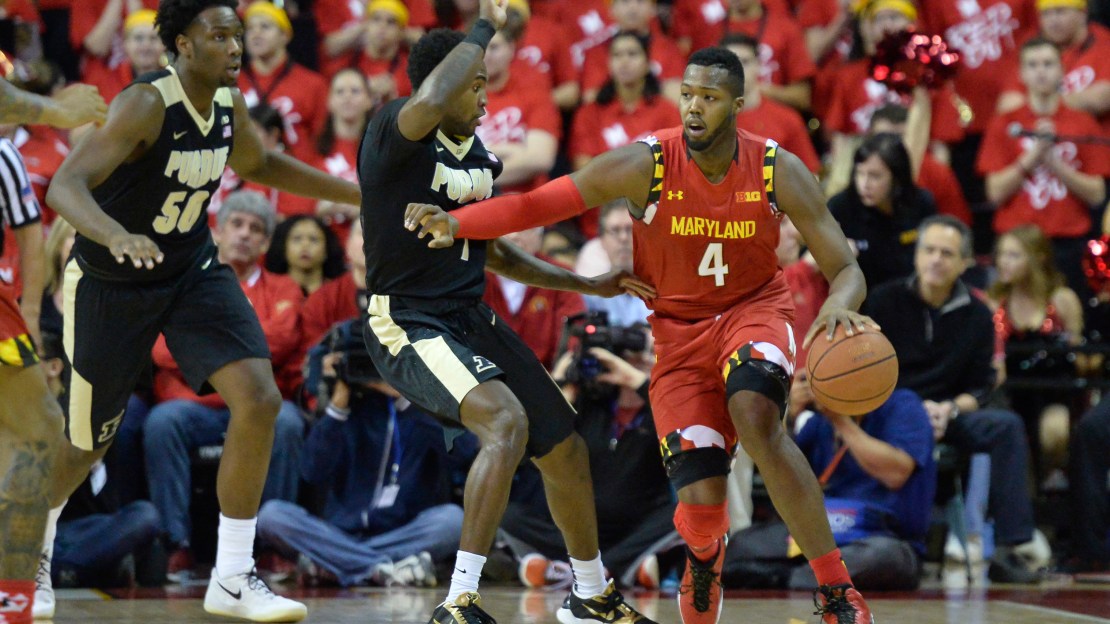 This week provided some clarity, with Maryland and Iowa asserting their muscle. Meanwhile, Indiana, Michigan and Purdue all took steps back, with the Wolverines suffering the biggest setback.

Best stat line: Corey Sanders had career highs of 39 points, 12 assists and eight rebounds in Rutgers' triple-overtime loss vs. Illinois on Wednesday night. Sanders' scoring total was the most ever by a Rutgers' freshman, breaking the mark of 35 set by Quincy Douby in an NIT game against Ohio State in 2004. It was the most points by a Rutgers player since Douby had 40 against Syracuse in 2006. Sanders hit 14-of-33 shots vs. Illinois.

Best sequence: Robert Carter Jr. does it all vs. Purdue. It hasn't taken long for the Big Ten to realize just how good the multi-dimensional Georgia Tech transfer is. He showed all of his skills on this individual highlight.

Robert Carter brings it up the court.

Best stat: The last six times Michigan State won by double digits at rival Michigan, as it did Saturday, the Spartans went on to make the Final Four. So, there's that.

Best celebration: Matt Costello at Michigan. With Michigan State owning a comfortable lead in the second half at rival Michigan, the much-improved forward went for a nice steal-and-slam. It was a great play, made even better by his stare and smile into the camera under the basket.

Here it is in photos, too.

Best news: Shavon Shields' health. The Nebraska standout took a scary fall and was carted off the court in the second half of Saturday's win vs. Rutgers. Shields lost consciousness and was sent to the local ER. According to a team release, Shields' CT scan was negative, and he will follow the school's concussion protocol.

Just landed in Newark and we are very happy and relieved to see this news. All the best Shavon. #B1GBrothers https://t.co/MaZtigoCbV

Best soundbite: It no secret that Wisconsin junior Nigel Hayes is one of the best interviews around. The gregarious Ohio native delivered another gem, this time in the postgame press conference following Wisconsin's victory over Ohio State on Thursday night. Mic drop, indeed.

Stock up: Michigan State. The Spartans got off to a school-record 16-0 start and ranked No. 1 in the nation. Then, MSU lost three in a row and looked lost. Now, behind Denzel Valentine's all-around greatness and Bryn Forbes' sweet stroke, the Spartans are rolling again. And you know Tom Izzo will have this team peaking in March.

Stock down: Ohio State. The Buckeyes had a bit of mojo with back-to-back wins vs. Penn State and at Illinois. But Ohio State came back to earth with losses to Maryland and at Wisconsin last week. NCAA hopes are dimming.

Biggest surprise: Wisconsin. How about those Badgers?! NCAA hopes were looking bleak after a three-game losing streak dropped UW to 9-9 overall not long ago. But since then, Wisconsin has ripped off five victories in succession, and, while the remaining schedule is grueling, another fourth-place finish still is possible. Amazing.

Biggest disappointment: Michigan. The Wolverines began the week on a four-game winning streak and in the hunt for the league title with two huge home games on tap. Alas, the Wolverines flopped, losing 80-67 to Indiana and 89-73 to Michigan State.

Brandon Taylor scored 11 of his 24 points in the final 10 minutes, and Penn State shocked No. 22 Indiana with a 68-63 win on Saturday night.

Yogi Ferrell had 17 points and nine assists for Indiana in an impressive 80-67 win at Michigan on Tuesday.

Rasheed Sulaimon had 21 points and a career-high 10 rebounds, and Robert Carter, Jr. contributed 19 points to help Maryland improve to 31-1 at home over the past two seasons with a 72-61 win vs. Purdue on Saturday.

Malcolm Hill scored 10 of his 32 points from the free-throw line in the third overtime and Illinois outlasted Rutgers 110-101 on Wednesday night.

Nigel Hayes scored 18 of his 21 points in the second half, and the Badgers still got more than enough from the perimeter after making a season-high 13 3-pointers in a 79-68 win on Thursday night over Ohio State.

Tre Demps scored 23 points with eight assists and Bryant McIntosh finished with 20 points and six rebounds as Northwestern snapped a five-game losing streak with an 82-58 win over Minnesota on Thursday night.

Michigan State?s Bryn Forbes hit seven triples and scored 23 of his 29 points in the first half in an 89-73 rout of rival Michigan on Saturday.

Freshman Diamond Stone had 16 points, 10 rebounds and a season-high eight blocks as No. 4 Maryland held off Nebraska 70-65 on Wednesday night.

Maryland's last defeat at home was against Virginia on Dec. 3, 2014.

Adam Woodbury's 13 defensive rebounds vs. Penn State on Wednesday were the most by a Hawkeye since 2006.

Minnesota has lost 12 in a row, last winning on Dec. 16. The Gophers have lost 11 Big Ten games in a row, matching their worst conference start since the 1922-23 season.

Max Bielfeldt had five points and seven rebounds for Indiana in his return to Ann Arbor. Bielfeldt went from Michigan to Indiana as a graduate transfer this past offseason. He received a nice hand from the crowd when he checked in the game in the first half.

Rutgers has lost its last 24 regular-season conference games, dating to an upset win over Wisconsin on Jan. 11, 2015.

Northwestern swept Minnesota for the first time since 2006.

Bryn Forbes, who hit 14 of 20 3-pointers in a pair of victories, is now shooting 50.3 percent from distance this season.

The Terps lead the nation in wins (19-2) in games decided by six points or less the past two seasons.

In honor of Black History Month, the Badgers wore throwback uniforms vs. Ohio State on Thursday from 1976 to honor Bill Cofield, the first black basketball coach in Big Ten history.

The Huskers' scoring average of 73.8 points in Big Ten play is their highest in conference games since the 2001-02 season.

Caris LeVert has missed the last 10 games with a lower left leg injury.

Maryland entered the week as the only team in Big Ten to have five players averaging 10 or more points.

The Scarlet Knights' last road win was Dec. 28, 2014 against Monmouth.

Nine of Iowa?s 10 Big Ten wins have been by double-figures.

"It's fun after you win, it's depressing when you lose, so I mean, the first thing I did was lay down when we got back in the locker room. This is a game you'll remember for a long time, you can tell your family and friends back home about it.? – Illinois? Malcolm Hill, after a triple OT win at Rutgers on Wednesday.

"I didn't have any panic. We were getting great shots, they just weren't going in." – Indiana?s Tom Crean, after his team rallied from an early double-digit hole to win 80-67 at Michigan on Tuesday.

"No, I'm cool. They got the guys they wanted. I'll take my two Final Fours and my wins and I'll carry on my merry way." – Wisconsin?s Nigel Hayes, when asked if there was any significance to the fact that at one point in the Badgers game vs. Ohio State that Wisconsin had three players who were from Ohio on the floor against the Buckeyes in Hayes, Vitto Brown and Khalil Iverson.

"These past two games, teams have just punked us. We can't let that happen." – Michigan's Zak Irvin, after the Wolverines' loss vs. Michigan State, their second consecutive lopsided home defeat