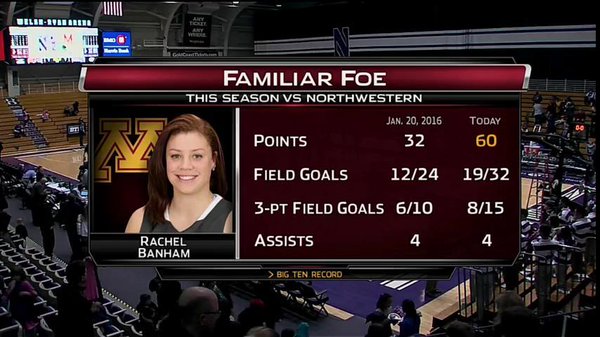 The Minnesota star erupted for a Big Ten single-game record and an NCAA record-tying 60 points in the Gophers' double-overtime win at Northwestern.

Banham set the Big Ten record on the jumper in the video above, and she tied the NCAA record in the closing seconds.

"My teammates set me up so well," Banham said in a BTN postgame interview. "I was just feeling really good, and I'm so happy we got that win."

She was feeling good, all right. Banham, who torched Northwestern for 32 points in January, hit 19 of 32 shots (59 percent), including 8 of 15 from the downtown, and dished out four assists.

Here's a look at Banham's damage this season vs. Northwestern:

Understatement: @GopherWBB's Rachel Banham is at her best vs Northwestern. pic.twitter.com/0K05oMFSTj

And check out our full Minnesota-Northwestern highlight:

At least one Minnesota student-athlete was impressed.

Thank you @rachelbanham15 for allowing us to witness greatness. Such a special talent.