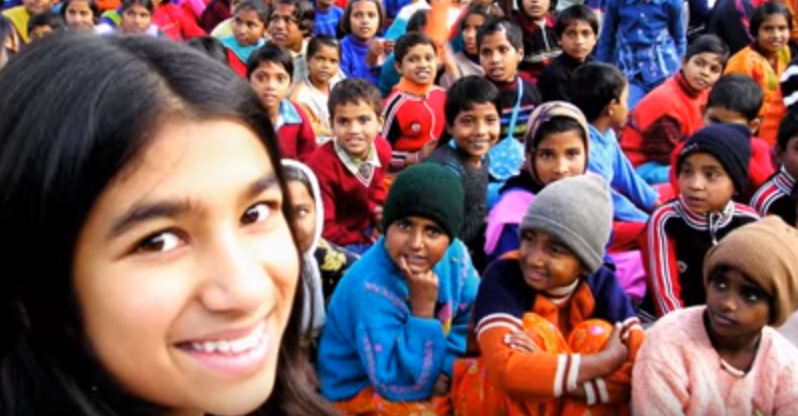 Penn State student Neha Gupta?s interest in helping kids around the world started with - of all things - her birthday parties with her grandparents in Northern India. On the other side of the world from her home in Yardley, Penn., her family would celebrate these milestones, but they wouldn?t keep the revelry to themselves.

?[My grandparents] had this tradition,? recalled Gupta, now an undergraduate at Penn State. ?If it was someone?s birthday in the family we would go to a local orphanage and celebrate our birthdays there. We would bring the kids gifts, we would read to the kids, and it was always something that I loved doing.?

As Gupta grew older, though, she began to take note of the difference between her life and those of the orphans.

?I was comparing our lives,? she said. ?Realizing we were the same age, same ethnicity, but living completely different lives ? It really just broke my heart.?

Struck by how these children were, through no fault of their own, relegated to a life of limited access to educational opportunities and basic healthcare, Gupta decided to take action in the only way she knew how.

Gupta even convinced her friends to offer up their own toys, and together the group raised $700. The money was put towards opening a library in India. But it also did much more than that: It inspired her to step up her efforts.

?I started making my own crafts,? Gupta said. ?I went door-to-door. I would explain what was going on in India and why I?m helping these kids. Then we [started selling] crafts made by the orphans themselves. Then, I started doing small-scale fundraisers and started applying for grants.?

It was soon apparent that this was more than the work of a kind-hearted girl; it was, for all intents and purposes, a de facto charitable aid organization. Under the banner of Empower Orphans, the group was soon registered as a 501(c)(3).

And Gupta wasn?t even a teenager yet when that happened.

She?s kept that work going into her college years, and has found Penn State?s commitment to philanthropy and engaged student body have made it an ideal incubator for Empower Orphan?s first college chapter. And the university knows it has something special with Gupta.

?It really takes only a couple of minutes with her,? Penn State President Dr. Eric Barron said. ?You realize how dedicated she is, how passionate she is, and that she?s on her way to being a great leader.?

Gupta is banking on those leadership skills to help her grow Empower Orphans into a global youth-focused aid organization. Its scope has already expanded to include current projects in the United States and Central and South America.

[btn-post-package]?My idea is to grow Empower Orphans into a self-sustaining organization that has youth-led chapters around the world,? she said. ?I really strongly believe in the power of youth helping other youth. So we?re starting with Penn State and then we?re going to create chapters across the globe. Each chapter is going to add to this huge picture and together we?re going to make a bigger difference in the world.

?I really believe that ? we?re giving them hope for a better future and we?re breaking that cycle of poverty.?

Watch the one-minute video above to get a window into Gupta's work around the world.