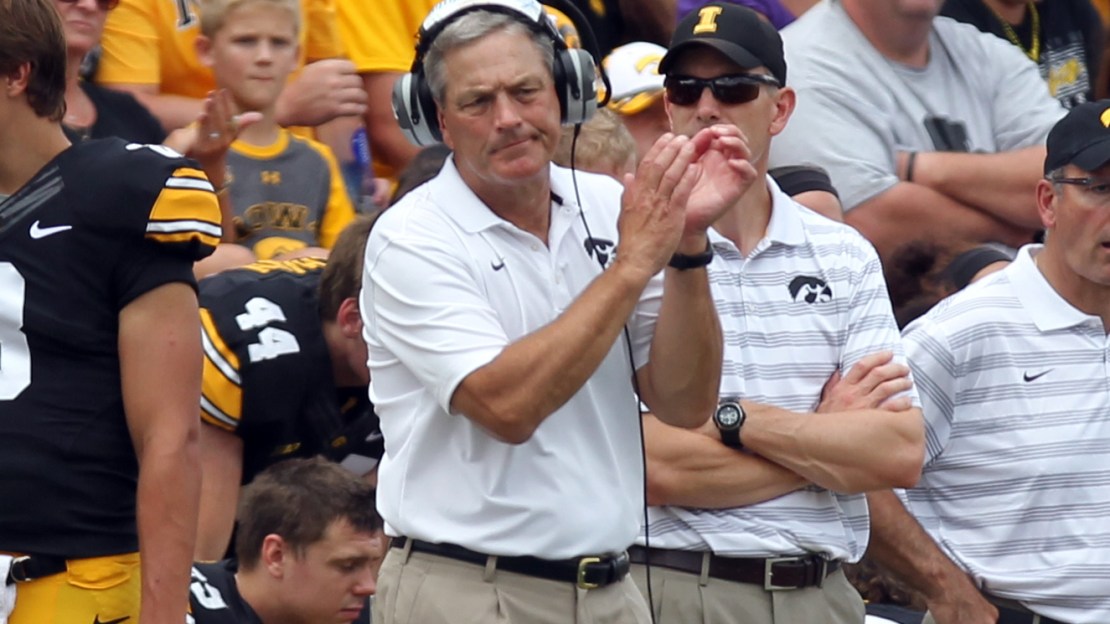 It was a blow for Iowa when Drew Ott was lost for the season to a knee injury in 2015. Imagine him on that team that made the Rose Bowl, right? But it sounds like there's a chance he could be granted a medical hardship and a fifth season of eligibility. Ott was Iowa's most dominant pass rusher until he got hurt. His return would be a huge boost for the Hawkeyes, who especially need some pass rushers.

?It's still in the works, and I've learned a couple of things that make me a little bit more optimistic,? Kirk Ferentz said during his National Signing Day news conference. ?But still, it's hard to say where it's going to go.?

Chad Leistikow from HawkCentral.com has more.

From most indications, Nebraska did a solid job recruiting. Sam McKewon of Omaha.com thinks the commits offer an upgrade to the defense's pass-coverage potential. And, as anyone who watched Nebraska last year knows, stopping the pass often was an issue.

For a team that schemes to stop the run - and generally did stop the run in 2015 - this pass defense boost was a must. The boost actually started with the 2015 class, but it reached another level with the 2016 class with some nice recruits in the fold.

There's a lot to like on the offensive side of the ball, but more playmakers are needed. The wideout and superback spots are questions.

Oh, and for any NU fans thinking Pat Fitzgerald should alter his staff: It isn't happening. Yes, OC Mick McCall will be back despite the attack that didn't hit on all cylinders.

Ohio State's 2015 season was marked with quarterback drama. Not so in 2016: J.T. Barrett is the unquestioned guy this fall. But it looks like there may be drama as to who could be the backup. Barrett's backup could be redshirt freshman Joe Burrow. It could be redshirt freshman Torrance Gibson, who still seems a greater bet to stay at receiver. It could be third-year sophomore Stephen Collier, though he still remains a longer shot than the highly recruited youngsters. Or it could be signee Dwayne Haskins, whom Urban Meyer gushes about.

Speaking of quarterbacks, depth could be thin at Wisconsin.

Chryst will have only three scholarship quarterbacks in the program next season: fifth-year senior Bart Houston, redshirt freshman Alex Hornibrook and incoming freshman Kare? Lyles. Normally, three?s not enough, but Chryst insisted he?s not worried about the lack of depth at quarterback.

?If they?re the right ones, it?s the right number,? he said. ?I feel comfortable with it.?

I have to trust Chryst, whom I consider to be a quarterback guru. And I think Hornibrook may end up being the guy.

No Big Ten school inked a better collection of wideouts than Michigan State.

Trishton Jackson, Donnie Corley, Cam Chambers and Justin Layne lead the way, as all four rated as four-star recruits by the 247sports composite. The quartet enters a Spartans wide receiver corps that's in transition following the 2015 season. The Spartans lose two of their three leading receivers from 2015, in Aaron Burbridge and Macgarrett Kings. For incoming freshmen, that transition means opportunity.

Here is an interesting look at how Penn State?s recruiting class came together. What is interesting is that RB Miles Sanders and E Shane Simmons were offered before their sophomore years even started shortly after James Franklin arrived as coach.

How did college football?s new coaches perform on the recruiting trail? Athlonsports.com takes a look.

It?s a bit of a mixed bag in the Big Ten for Minnesota?s Tracy Claeys, Rutgers? Chris Ash, Maryland?s D.J. Durkin and Illinois? Bill Cubit. I was impressed with the class Claeys assembled, especially his ability to keep some top Minnesota players home.