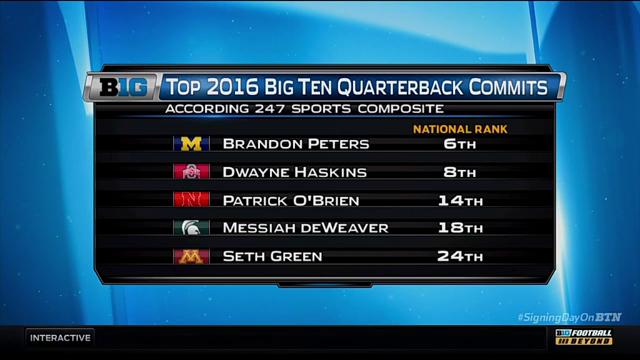 The Big Ten enjoyed a strong Signing Day on Wednesday, with Ohio State and Michigan leading the way with top-10 classes. Penn State, Michigan State and Nebraska also reeled in Top 25 hauls, according to 247Sports.

I caught up with 247Sports national writer Kevin Ryan to get a breakdown on 2016 Big Ten recruiting. Best class? Overrated class? Underrated class? And what does he think of Jim Harbaugh's tactics? That and more are covered here.

Q: Who has the best class?
A: Ohio State landed the best class in the Big Ten and the No. 4 class nationally, according to the industry-generated 247Sports Composite. The Buckeyes? class was led by five-star defensive lineman Nick Bosa, and was joined by an amazing 17 four-star prospects in the class. Seven of those four-stars are early enrollees, so they will be in Columbus for spring practice and will have a head start on the rest of the group as they try to get onto the field in the fall for a program that saw nine players declare for the draft.

Q: Who is the most-hyped recruit?
A: Michigan signee Rashan Gary was the most hyped recruit of the 2016 cycle, and for good reason. The defensive lineman was dominant in the high school ranks, even against other top players in an all-star setting. He was the consensus No. 1 prospect in the class, and the fact that he delayed his college decision until National Signing Day helped fuel the hype train, as well.

Q: What is the most overrated class?
A: This is a tough one to peg because I think the Big Ten classes are ranked about where they should be. In fact, I think we at 247Sports have almost every Big Ten class ranked higher than they ended up in the 247Sports Composite rankings. Pressed for an answer, I?ll say Penn State could be a bit overrated because the class is top-heavy. They are getting a big boost from five-star running back Miles Sanders and high four-star linemen Michal Menet and Shane Simmons.

Q: What is the most underrated class?
A: I?ve said this for a long time: Any recruiting class of Mark Dantonio?s is going to look underrated when all is said and done because he and his staff do a great job developing players and signing prospects that fit their mold. In terms of sheer numbers and ratings, I think Wisconsin?s class will be a surprise, as well. The Badgers landed a handful of players that weren?t that heavily recruited–guys like offensive tackle Patrick Kasi, receiver Quintez Cephus and tight end Jake Hescock–that could go on to have very good careers in Madison.

Q: Which school was hurt most by de-commitments?
A: I think Penn State took a hit at the end of the recruiting cycle. At one point, the Lions were flirting with a top-five class in the country, and just last week they were inside the top 15. But they ended up barely inside the top 20. James Franklin and Co., watched five players de-commit over the last month, including four in the last nine days.

Q: Any surprise flips late?
A: Unlike in past years, there weren?t too many surprise flips on Signing Day. There were some prospects who changed schools on Signing Day, but many of them could have been classified as expected or at least somewhat anticipated. In the Big Ten, the one that comes to mind was Penn State losing Andrew Pryts on Signing Day. Being a Nittany Lions legacy, I think that one stung a bit. It wasn?t much of a surprise, but quarterback Dwayne Haskins flipping from Maryland to Ohio State was huge for both teams. It also led to Keandre Jones flipping to OSU. On Wednesday, Buckeyes coach Urban Meyer said about Haskins, "He's the best quarterback at his age I've ever seen.?

Q: What school did better than you thought?
A: I think Nebraska and Mike Riley surprised me a bit with their close. The Huskers finished with a top 25 class on Signing Day. They were hovering in the mid-30s for most of the recruiting cycle, and it seemed like the Huskers went about two months without a commitment. They landed talented offensive lineman Matt Farniok late in the process, and finished with a flurry.

Q: What school disappointed the most?
A: I?m surprised Iowa didn?t capitalize more on its on-field success in 2015. The Hawkeyes were in the hunt for a spot in the College Football Playoff and were being discussed ad-nauseam by national analysts down the stretch. In the end, the Hawkeyes had the No. 47 class in the nation according to the 247Sports Composite - good for just eighth in the Big Ten. All 25 of the Hawkeyes? prospects are rated as three-star recruits.

Q: What did you think of Jim Harbaugh?s tactics?
A: Recruiting is the lifeblood of college football. Many coaches yearn for NFL jobs so they don?t have to deal with the day-to-day, 24/7 grind of recruiting. I wondered how Harbaugh would be on the recruiting trail as he transitioned back to the college game, but he jumped in with both feet. The recruiting gala was a great idea that will likely be copied by other programs. As far as sleeping over with recruits, climbing trees, doing trendy dances, etc. ? a lot of the prospects in this day and age love his willingness to do whatever it takes. He has folks talking about him and Michigan football constantly, which is a good thing. It doesn?t have to be done that way to be successful, and I am personally a bit more old-school in that regard, but he landed a top-five class this year and I expect he?ll do the same in coming years, as well.

Q: How did Big Ten fare overall?
A: The Big Ten did well on a national scale this season. The league had Ohio State and Michigan in the top five, and Michigan State, Penn State and Nebraska finished inside the top 25. Wisconsin finished just outside the top 30 (32), but we think their class is better than other services are giving it credit for this cycle. The SEC will always be the king of recruiting, but the Big Ten fared very well in comparison to leagues like the ACC, Big 12 and Pac-12.

All of our Signing Day videos are in this packed YouTube playlist below, too.