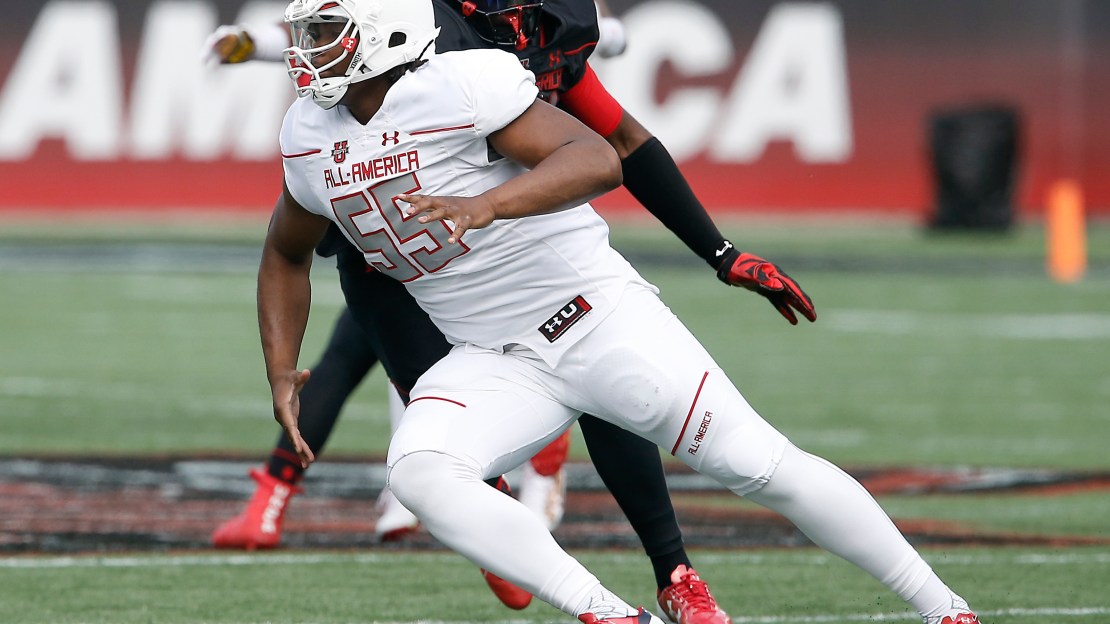 The nation's No. 1-ranked recruit in the 2016 class gave his commitment to Jim Harbaugh and the Wolverines today.

With Gary on board, Michigan now has what is widely considered one of the top ranked classes in the nation.

So, who exactly is Rashan Gary? Why is he the top ranked player in the nation, and what current or former prospects does he remind people of?

Here is a look at Rashan Gary's profile.

Rashan Gary, the No. 1 player in the nation, commits to Michigan

ESPN's Tom Luginbill on Gary: "I would make the argument that outside of Leonard Fournette, I don't know if we have ever had a player with as few red flags as Rashan Gary. He has never once backed down from competition. This is a young man who will not only succeed in football, but he will succeed well beyond that."

Luginbill on who Gary compares to: "He reminds me most of Leonard Williams, who played at USC and is now with the New York Jets. Rashan is a little more polished, but our entire staff agrees that they are very similar."

ESPN's Tom VanHaaren on Gary: "Rashan has a lot of good qualities on and off the field. You look at what he can do on the field and he is a very versatile defensive lineman. He can fit any scheme, he can play defensive end or slide inside and play tackle, he can help against the run or rush the passer. What doesn't show up on a scouting report, though, is a big part of it as well. At the Under Armour All America game, Rashan was a vocal leader for his team, pushing his teammates to get more out of them. He lead by example out there and was the best player among the elite prospects in his class. A lot of times with highly ranked prospects, the reason that they don't pan out in college has nothing to do with talent. How the adjust to being on their own, academics, working out on their own, staying out of trouble, the off field stuff can be where the busts come into play. When you look at Rashan there aren't any red flags that suggest that will be an issue with him. His biggest red flag, according to his mom, is that he doesn't keep his room as clean as she would like him to. You combine his talent with his work ethic and character and you have an elite prospect who has some big things ahead of him."

VanHaaren on who Gary compares to: "If it has to be a past Big Ten player I might say Cameron Heyward, who played for Ohio State. They're similar in size and both are strong, versatile linemen that can be disruptive."

"Backstage, they told me that we got some really good news." - @CoachJim4UM, in reference to top recruit Rashan Gary https://t.co/7HTDNhAeAx

Scout.com's Allen Trieu on Gary: "He's a great athlete for his size. His ability to get off the ball and his quickness is outstanding. He's built like a tackle but athletic enough to play end in certain situations. He was as dominant as any player has been in the Under Armour All-American Game the last few years."

Trieu on who Gary compares to: "Ndamukong Suh springs to mind. He's an inside guy with the size and strength to play inside and stop the run, but also the quickness and athleticism to be a pass rusher. Suh is a big comparison, but Rashan has that type of talent."

247Sports.com's Steve Lorenz on Gary: "Gary is the No. 1 prospect in the country for multiple reasons. First, he has a simple size and speed combination that is unmatched by almost any high school prospect going back at least five or ten years. He excelled at an elite level in both the camp and in-game settings, and was exceptionally dominant in the Under Armour All-American game in January, an event attended by many of the nation's top prospects. Another one of his biggest attributes is his versatility. Every program recruiting him, including Michigan, will use him at both end and on the interior of the defensive line. He is a five-star level prospect at the 5-tech, 3-tech or even nose tackle, and will be used by his new coaching staff as such. I personally believe his best asset is his speed, as he ran a laser-timed 4.78 at 286 lbs. right before his senior season. That's amazing for a 17 year-old. He'll get around you on the edge, or run you over. He's a true difference maker that would see the field next season for any program in the country."

Lorenz on who Gary compares to: "Gary is one of the most touted recruits of the BCS era and is one of only a few players to be a consensus No. 1 overall prospect, so it was difficult to find a true comparison for him. However, one that may fit the bill is former No. 1 NFL Draft pick and Penn State star Courtney Brown. Brown, like Gary, was around the 280 mark, but had that size and speed combination that gave tackles and quarterbacks fits. Both were what you want out of a defensive end, but at a defensive tackle size."

Rivals.com's Josh Helmholdt on Gary: "The beauty of Gary's game is that he has the size and skill set to do everything the position requires at a very high level and he combines it with a work ethic that surpasses most of his peers. Gary can collapse the pocket, rush the quarterback, fill gaps, run down plays to the sideline and he keeps coming at you with a motor that never stops."

Helmholdt on who Gary compares to: "I wanted to go old school here because even though Gary's skill set is very 21st century, his work ethic and approach to the game is a throwback to an earlier era. He resembles former Penn State defensive lineman Rosey Grier from a height/weight standpoint – although in his day Grier's size was more unique compared to his competition – and also in the way he plays like a smaller, more athletic defensive lineman than his size would suggest."