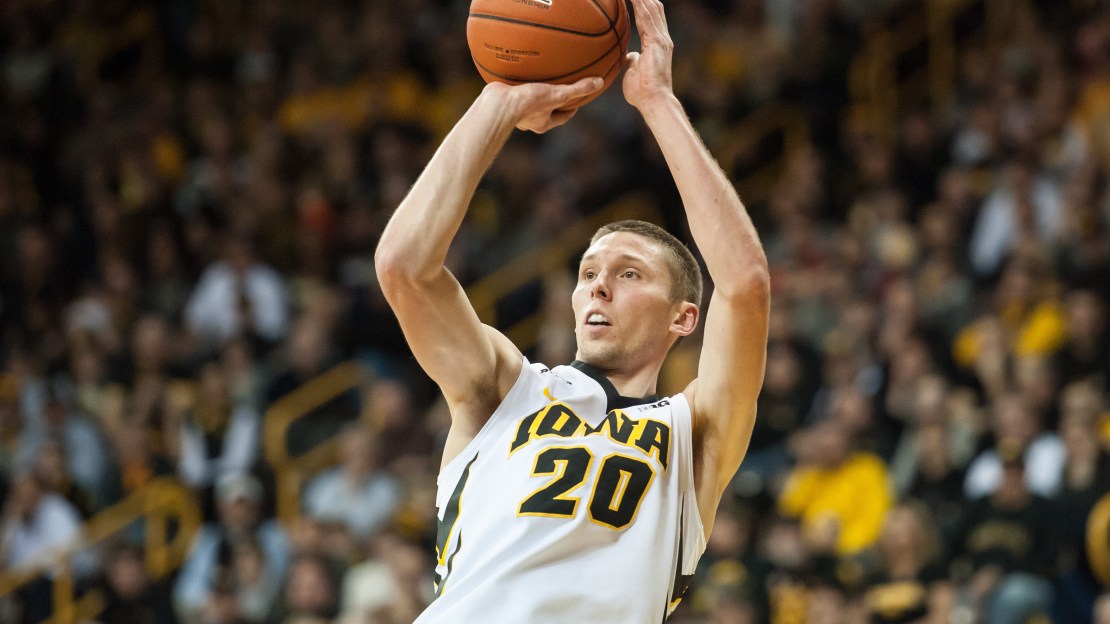 That being the case, we asked BTN analysts and regular BTN.com contributors Jon Crispin and Jess Settles to share their best of the first half of the conference slate.

See their picks below.

BEST PLAYER
Jon Crispin: Jarrod Uthoff, Iowa. Denzel Valentine would have likely been at the top, however Uthoff and the Hawkeyes put together a tremendous start to conference play. Best player on the best team gets the nod.
Jess Settles: Jarrod Uthoff, Iowa. Second in the league in scoring and first in blocks. His emergence at both ends of the floor is the major reason why Iowa is tied for first place with Indiana.

BEST COACH
JC: Fran McCaffery, Iowa. His Hawkeyes are not only a versatile and tough bunch, they are also the most consistent team in the Big Ten. They?ve already swept (for the regular season) Michigan State and Purdue.
JS: Fran McCaffery, Iowa. Iowa has already swept Michigan State and Purdue. After losing Aaron White (First Team) and Gabe Olaseni (Sixth Man), McCaffery is pushing all of the right buttons and getting major contributions from his bench.

BEST FRESHMAN
JC: Thomas Bryant, Indiana. Bryant has tremendous upside, a great motor and has shown significant improvement since the start of the season. He?ll certainly be tested with a tough schedule for the Hoosiers in February and March.
JS: Diamond Stone, Maryland. As well as Thomas Bryant and Ethan Happ are currently playing, Stone is a force to be reckoned with and gives No. 3 Maryland a strong post presence. His opening night 39-point, 12-rebound performance vs. Penn State was remarkable.

MOST IMPROVED PLAYER
JC: Peter Jok, Iowa. Jok has gone from a somewhat after-thought to a lethal shooter with high-level NBA potential. His first-half performance at Michigan State was one of the best halves anyone has had all season. He is one of the biggest keys to Iowa?s success.
JS: Peter Jok, Iowa. Jok is averaging 17.7 points and shooting 44 percent from distance in conference play. Once a defensive liability, the junior is second in the league in steals and playing at an all-conference level for first-place Iowa.

BIGGEST SURPRISE (PLAYER)
JC: Duncan Robinson, Michigan. Not too many players can come in to Big Ten basketball from the D-III level and have the kind of impact that Robinson has had on the game. Not too many players come to the Big Ten from D-III to begin with. He will continue to develop his game and could be a star in this league.
JS: Matt Costello, Michigan State. If there's a silver lining to Denzel Valentine?s injury, it?s the emergence of the 6-foot-9 senior. Costello has registered four double-doubles in Big Ten play, all while leading the conference in rebounding (10.8), and is a big reason why the Spartans still have a pulse.

BIGGEST SURPRISE (TEAM)
JC: Iowa. I?m not even going to begin to say that I saw this coming. I didn?t. I thought their (once-perceived) lack of depth would be their main issue, but I was wrong. The Hawkeyes are balanced, versatile, consistent and surprisingly deep. They are a legitimate top 10 team, and I expect them to have a very low number next to their name in the brackets in March.
JS: Minnesota. I wasn't expecting Minnesota to compete for the Big Ten title this season – or even an NCAA tourney berth. But I certainly didn't expect Richard Pitino's team to be 0-10.

BEST WIN
JC: Michigan State vs. Maryland. No one in the Izzone will ever forget Matt Costello?s rib-cracking bear hug and excitable head slap of Tom Izzo as Costello checked out of the game to a standing ovation. After losing three consecutive games, this was a near must-win game for the Spartans. They responded with a huge top-10 victory over Maryland to avoid losing four in a row.
JS: Michigan vs. Maryland. No Spike. No Caris. No problem. Michigan?s spread offense was clicking on all cylinders against the Terps, and the Wolverines stayed in the title hunt with a signature win.

BEST PLAY
JC: Ethan Happ?s Game-winner vs Michigan State. We have now all witnessed the potential and fundamentals of Happ. This was a huge win for Greg Gard and the Badgers as they have lost so many close games this season. The Badgers are going to cause some trouble for top-tier teams in the second half of the Big Ten season as they?re learning how to dictate tempo and limit possessions.
JS: Caleb Swanigan coast-to-coast at Iowa. The freshman went Charles Barkley on us, blocking player of the year frontrunner Jarrod Uthoff?s shot, dribbling coast to coast, going behind his back and assisting Hammons. No one that big should have that skill set.

Jarrod Uthoff, Iowa. One of the most versatile players in the country, Uthoff is a true stretch-4 who can hurt opponents in a variety of ways. Even on defense. Case in point, the Big Ten-leading 2.9 blocks per game.

Denzel Valentine, Michigan State. Valentine is likely the most valuable player (to his team) in the country. Many players around the nation do a little of everything, but Valentine does A LOT of everything.

Yogi Ferrell, Indiana. Since losing James Blackmon Jr. for the season, Yogi has turned it up a notch. He scores when his team needs him to score and he distributes the ball in a way that makes his teammates shine.

Nigel Hayes, Wisconsin. There?s no one better in the conference (and possibly the nation) at getting to the foul line. Hayes has gotten comfortable working with better spacing in the Swing Offense.

Melo Trimble, Maryland. Melo has been quietly great. In my opinion, he is the best transition and ball screen point guard in the country. Something tells me he?s going to put together a terrific second half (of the season) too.