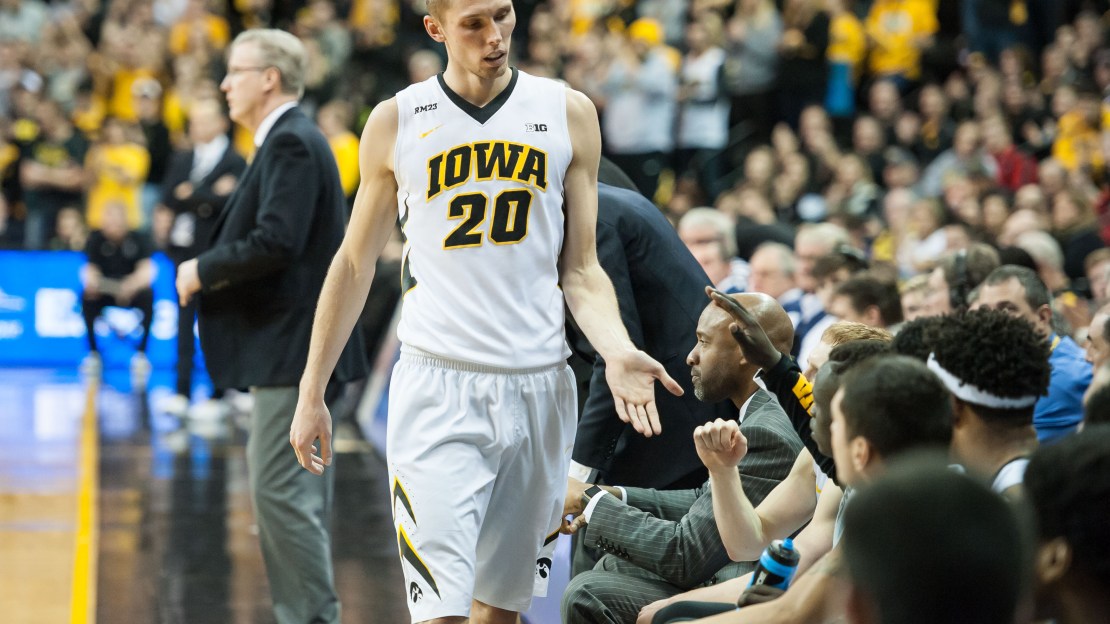 Following Sunday's quartet of Big Ten games, every team has played at least nine conference games, exactly half of its league schedule.

Halfway home, it's seems like a great time to hand out some midseason grades.

Get my report card for all 14 teams below.

Illinois (10-12, 2-7): D. Injuries have impacted this roster greatly. And where?s the defense? But Malcolm Hill is doing his part. Will it be enough for a program that hasn?t been to the Big Dance since 2013? Will a third NIT bid keep fans happy?

Indiana (18-4, 8-1): A. Yes, the schedule hasn?t been daunting. But the Hoosiers have been impressive in going 8-1, just one win fewer than it had all of last conference season. And they are doing it without injured James Blackmon. All hail Yogi Ferrell!

Iowa (17-4, 8-1): A+.  A core of four seniors leads the way for a relentless Hawkeye squad that can score in bunches. No player epitomizes the Iowa style better than Jarrod Uthoff, the most versatile player in the Big Ten and front-runner for player of the year.

Maryland (19-3, 8-2): A-. The Terps were supposed to be the class of the Big Ten. And, they haven?t disappointed. Five players average double-figures. No other league team can match that. No team has more talent.

Michigan (17-5, 7-2): B+. Like most John Beilein teams, this one continues to improve. The Wolverines come at foes in waves with athletic ability and shooters. Wait until Caris LeVert returns from injury.

Michigan State (19-4, 6-4): B. A school-record 16-0 start has given way to a 6-4 Big Ten launch. This team fouls too much and commits a lot of turnovers. No doubt, Denzel Valentine's knee surgery and recovery has impacted this team's record. Still, talent abounds. And no coach is better than Tom Izzo.

Minnesota (6-16, 0-10): F. Richard Pitino has admitted he felt this would be a rebuilding year. But even he didn?t envision things being THIS bad. While the Golden Gophers have been more competitive the last couple of times out, they may be looking at a one- or two-win conference season.

Nebraska (12-10, 4-5): C+. The Cornhuskers have become a much better offensive team, thanks to the arrival of Kansas transfer of Andrew White III. And a win at Michigan State showed the potential of the Huskers. But more talent inside is needed.

Northwestern (15-8, 3-7): C. This is Chris Collins? most talented roster yet. But injuries and inconsistent shooting have been issues, as well as some defensive lapses. After opening 3-2 in league play, the Wildcats have lost five consecutive games, the last three by an average of 25.7 points. That first Big Dance bid will have to wait ? again.

Ohio State (14-9, 6-4): C+. This was supposed to be a rebuilding year, and it has been. But Thad Matta has this youthful, and inconsistent, squad improving and showing that the future is bright in Columbus.

Penn State (11-11, 2-7): D+. Patrick Chambers is assembling a talented roster, and a lot more help is on the way. But for now, scoring is too difficult for the Nittany Lions, who are last in the Big Ten in scoring (65.7 ppg).

Purdue (19-4, 7-3): B. Talk of a Big Ten title and Final Four have cooled a little, but don't sleep on the Boilermakers. This team is big and tough, although it does lack athleticism. And turnovers and spotty guard/wing play can be issues. Still, when dialed in, the Boilermakers can be forceful.

Rutgers (6-16, 0-9): F. The Scarlet Knights went 2-16 in the Big Ten last year. They may be hard-pressed to match that win total. Can it get much worse than a 50-point loss at home? The good news: Two games remain vs. fellow winless Minnesota.

Wisconsin (13-9, 5-4): B-. Greg Gard is basically auditioning for the job. He's doing a nice job, too, as the Badgers are playing their best basketball of the season. Winners of four straight, including a victory over ranked Indiana, Wisconsin's four conference losses have come by a total of 15 points.