Dienhart: Michigan Wolverines have their man in Warde Manuel 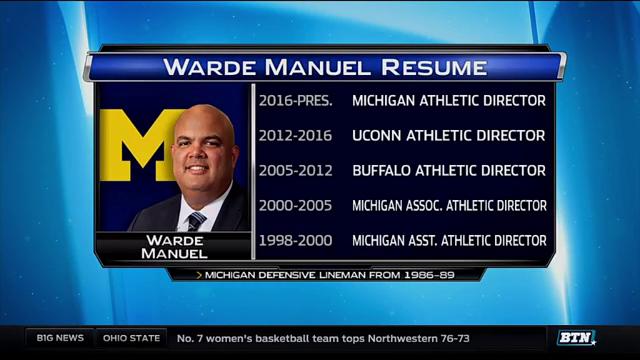 Michigan has its man: Warde Manuel is coming home to be the new athletic director.

"Athletics plays a key role in the U-M community and beyond. It is a front door to the many activities and values of our community,? Michigan president Mark Schlissel said in a statement. ?Warde Manuel knows how to succeed in the classroom, compete on the field and positively contribute to the social fabric of a vibrant university.?

Manuel is a former Wolverine defensive tackle who is a rising star in college athletics administration. He cut his teeth as an athletic director at the University of Buffalo and UConn. Now, he?s back at Michigan, where it all began as a student-athlete (1986-89) and administrator from 1998-2005.

"I am honored to have been selected ? ," Manuel said in a statement. "I look forward to working with all the student-athletes, coaches, staff, faculty, students, donors and fans to continue the Michigan tradition of being ?Leaders and Best.?

Manuel?s love of Michigan is apparent, calling this a dream job at his press conference today. He?s a Michigan Man. He wore the famed winged helmet. He was screamed at and molded under King Wolverine: Bo Schembechler. And that?s the ultimate seal of approval up and down State and Main Streets in Ann Arbor.

?This is the first time Michigan has hired a standing A.D., a great move for Michigan and college football,? said John Bacon, a noted author, college teacher, speaker and Michigan alum. ?Warde Manuel is steeped in Michigan lore from a player standpoint and he also has worked in the athletic department. He also has been very successful at Buffalo and UConn. There is no reason to think he will be anything but a great success at Michigan.?

Deposed A.D. Dave Brandon also was a former Michigan football player and a Bo guy. But, unlike Brandon-a former pizza executive who resigned in October 2014 amid growing unrest about his cold, bottom-line style and seeming lack of respect for tradition–Manuel doesn?t come from the corporate world. And, it was that business mind-set that Brandon brought to Ann Arbor that may have been his ultimate undoing.

"I think so," said Bacon. ?The idea of treating your fans as customers wore thin very quickly and backfired.

How is Manuel different from Dave Brandon? ?Just about every way possible," Bacon said. "Great athletic department experience, gets the whole picture. Stays in the background."

"First, don?t break it," said Bacon. "Second would be (building a ) relationship with Jim Harbaugh and the other coaches. And the third thing, eventually he has to get to cost reduction within the department."

Michigan looks primed for a run of success. Momentum permeates the athletic department after some tumult the last decade. The basketball program is revving up after taking a step back in 2014-15. Prior to that, John Beilein took the program to the NCAA title game in 2013 and to the Elite Eight in 2014 before last year?s 16-16 clunker.

And then there is football, where excitement and optimism are off the charts after a smashing 10-3 debut by Harbaugh. Thank interim A.D. Jim Hackett for that, as he was one who pulled off the coup of all coups by luring Harbaugh back home to Ann Arbor prior to 2015. History may tell us it was one of the greatest feats in school history, as Harbaugh has the program primed to make a run at not just its first Big Ten title since 2004-but perhaps at Michigan?s first national championship since 1997. All things seem possible under Harbaugh, a teammate of Manuel?s in 1986.

"I know his love and passion for Michigan football,? said Manuel. ?He should know mine"

And a seat in the Big House once again is a cherished possession, as Michigan takes aim at passing rivals Michigan State and Ohio State on the gridiron.

"I've known Warde for almost 30 years as a teammate, friend and sports professional and I can't think of anyone more suited for this job," former Wolverine and 1991 Heisman winner Desmond Howard who played with Manuel at Michigan and tweeted recently.

A native of New Orleans who is Michigan?s fifth A.D. since 1997, Manuel needs to keep this train moving forward for a department that has a $151 million budget and a staff of 350.

There is no denying the success the 47-year-old Manuel enjoyed the last four years at UConn, which included six national championships highlighted by dual titles for the men's and women's basketball teams in 2014. He took over UConn in February 2012, while the school was working through academic sanctions that kept the Huskies out of the 2013 NCAA Tournament.

Manuel also proved a steady hand in the transition from iconic hoops coach Jim Calhoun to Kevin Ollie. The program has thrived, posting back-to-back perfect academic progress reports to the NCAA in addition to on-court success.

Prior to UConn, Manuel was A.D. from 2005-2012 at the University at Buffalo, which he helped establish as a Division I program. Manuel pumped life into Buffalo, beginning with the hiring of Turner Gill. Manuel also changed the image of the school with a new logo and pumped up the athletic department budget from $11 to $25 million.