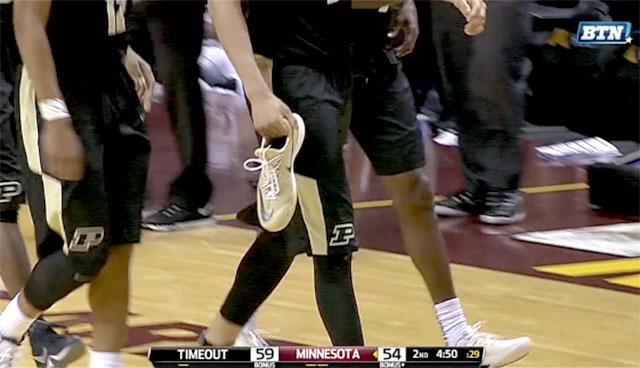 Of course it wasn't the first time an athlete lost a shoe during a game. And it certainly won't be the last time.

But when Purdue's A.J. Hammons lost is shoe on the offensive end of the court, then pulled down a defensive rebound while hold that same shoe in his hands … well, that's a moment.

"I was glad I got the rebound. My foot was slipping," Hammons told the Lafayette Courier-Journal after the game. He thought about throwing it to the side but told reporters he wanted to get back.

What did Coach Matt Painter say to him when he came off the court for the timeout?

"He was just laughing because I ran with my shoe," Hammons said. "It was funny."

We dug into our video vault and came away with a few other great moments in recent Big Ten shoe history. Have look below.

Back in December of this men's basketball season, Northwestern's Aaron Falzon lost one shoe on the offensive end of the court, ran back to play defense with one shoe on, Northwestern got the ball back, the ball finds Falzon, and he calmly knocks down a three-pointer – still with only one shoe on.

On Nov. 11, 2015, Maryland linebacker Jermaine Carter finished up a play against Indiana high-octane offense only to have shoe trouble. Instead of coming off the field to fix it, Carter rips the shoe off and tosses it to the sideline before taking his place on defense for the next play because … it's football.

In 2014 at Chicago's United Center, Illinois' Kendrick Nunn had the basketball but lost a shoe. He makes the pass to a teammate, tries to play with one shoe on, then retreats to his other shoe, grabs it, and puts it back on in time to get back on defense.

Ohio State fans will recall Buckeyes running back Ezekiel Elliott lost a shoe during the 2014 Big Ten Football Championship against Wisconsin ij Ind. Elliott takes the hand-off and cuts up field before a Wisconsin defenders get a hand on his foot.

The Badger gets the shoe but not Elliott, who scampers down the field before being tackled at the 10-yard line. Fox football announcer Gus Johnson summed it up as only Johnson would: "Feet don't fail me now!"

And finally, here's an all-time favorite and a video clip that still draws fan views to this day.

On Jan. 13, 2013, the Iowa men's basketball team led Northwestern 51-37 when a Northwestern's Alex Marcotullio lost a shoe on the court but keeps playin defense. Iowa's Aaron White swooped in to pick up the shoe and tossed it to the sideline so that no one steps on it. Play, of course, continues. But watch the replay at the end of the clip below. The shoe almost drills Iowa head coach Fran McCaffery, who ducked out the way.