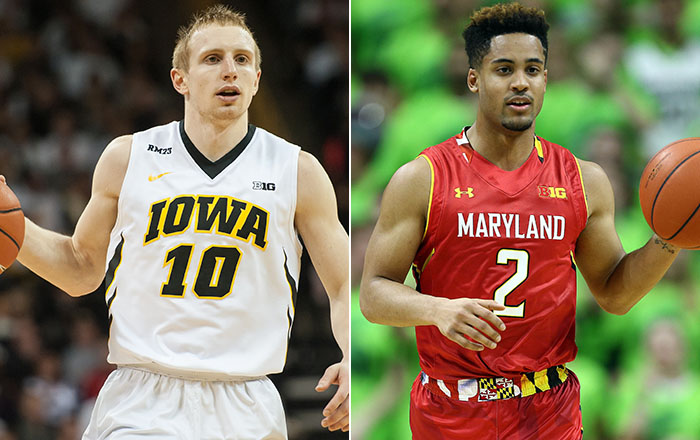 Time for me to reach into my mailbag and answer your pressing queries.

It seems a white-hot Iowa team has the attention of many of you. The Hawkeyes have a big game tonight. With that, let?s get going.

Who do you have winning the Iowa-Maryland game in College Park, Md., on Thursday? – Braydon Dobereiner

I know the Terrapins are tough with Melo Trimble and Co. But how can you go against the Hawkeyes, winners of nine in a row overall and 13 Big Ten game in succession dating to last year? Even on the road in a tough environment? Iowa is so battle-tested, already winning games at Michigan State and at Purdue, two of the more difficult places to win in the Big Ten. Iowa won?t be intimidated rolling into Maryland and its hostile environment. The Hawkeyes are a savvy team led by seniors like Jarrod Uthoff, Mike Gesell and Adam Woodbury. And Peter Jok is a junior.

Who won the Big Ten-ACC-Challenge this season? I have not had any luck in trying to find out – Milt Gilbert

Just how far do you think Indiana will go without having an experienced big man in the post? – Gene Clifford

True, IU has no savvy post presence like a Cody Zeller. But freshman Thomas Bryant is pretty talented and gets better each day, averaging almost 12 points a game. The Hoosiers? ability to score covers up some deficiencies, as this is the No. 1 scoring team in the league. And since James Blackmon Jr. was lost for the season with injury, the defense has improved markedly. Credit the freshmen. And know this: basketball is a guards? game. Big men are nice, but not a necessity to have a good season/team. The Hoosiers have good guards, led by Yogi Ferrell. I think IU has a shot to at least be a Sweet 16 team. After that? I want to see how Indiana does in two remaining games vs. Iowa, and there also are games left at Michigan, at Michigan State and vs. Purdue and Maryland.

How can you say Michigan State?s stock is down? The Spartans just had beaten a top 10 team in Maryland over the weekend? – Jordan White

Yes, that was a nice triumph for Michigan State. But prior to that victory, the Spartans had lost three games in row, falling to Iowa, Wisconsin and Nebraska. And two of those games were in East Lansing. The win over Maryland evened the Spartans? Big Ten record at 4-4. Who saw that after the Spartans began the season with a school-best 16-0 mark? That?s why I had Michigan State?s stock down.

Without a doubt. McCaffrey has done an exceptional job this season, guiding the Hawkeyes to a top-five ranking. The program is aiming for its first Big Ten regular-season title since 1979, already sweeping both Michigan State and Purdue. Indiana?s Tom Crean also deserves consideration. The race for Big Ten Coach of the Year may come down to how Iowa and Indiana do vs. each other. The teams still have to play twice: Feb. 11 in Bloomington and March 1 in Iowa City. As for Uthoff, he is the leader for player of the year. He leads the Big Ten in scoring, is 11th in rebounding and first in blocks. The guy is a versatile stud.

What is your take on Tracey Claeys as head coach at Minnesota? – Fred Raumer

The jury is out on Claeys. He never has been a head coach. He is a smart defensive mind who has a good staff. Best of all: Claeys learned under Jerry Kill. He knows how to build and run a program, following the blueprint Kill has formulated. It?s not about flash; Claeys is a blue-collar coach who knows how to find talent that ?fits? what he wants to do on both sides the ball. A big key in 2016 will be how well the Gopher offense performs, as Claeys has made big staff changes on that side of the ball. He has a lot to prove in 2016.