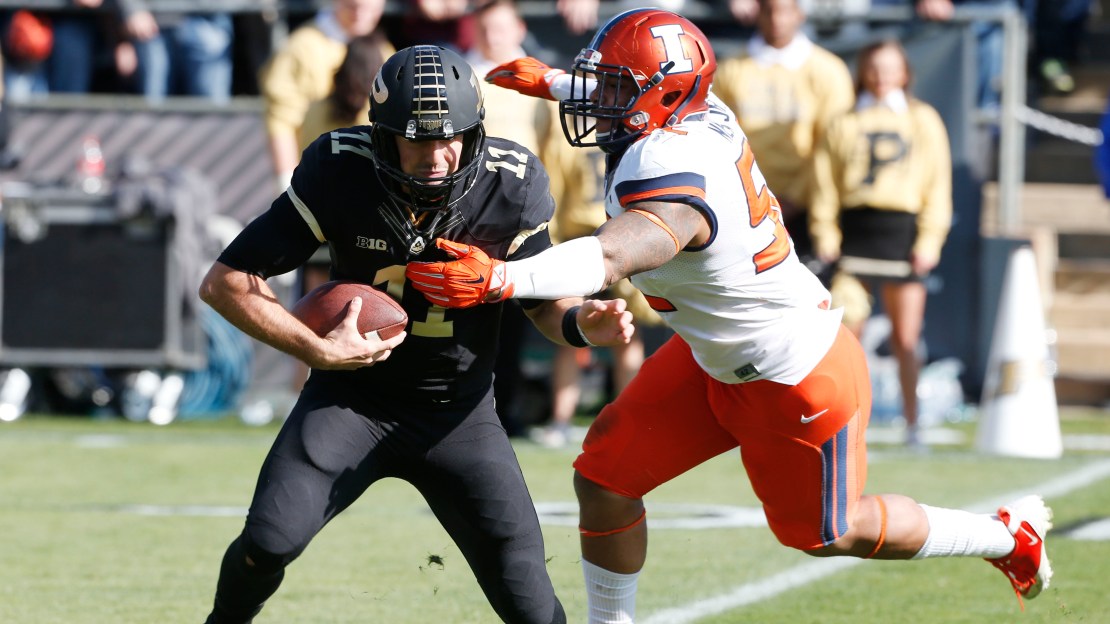 A raft of players is exiting Illinois. The loss of some is no biggie. But to see LB T.J. Neal bolt hurts.

With Neal leaving, the Illini will be without six of their top seven tacklers from 2015. Safety Taylor Barton is the lone returnee.

Iowa QB C.J. Beathard has had a sports hernia operation. The guy was nagged almost all season but still battled on. Tough guy.

Iowa spokesman Steve Roe said that coach Kirk Ferentz would be able to address health-related matters at the Feb. 3 National Signing Day news conference. C.J.'s father, Casey, told HawkeyeNation.com that the doctor who performed the surgery, Philadelphia's William Meyers, said that if C.J. "had to play a game in six weeks, he should be ready to play. Luckily he doesn?t have to.?

Interesting story from Omaha.com on Nebraska A.D. Shawn Eichorst, whose recruiting vision is not geographic.

He wants to see ?full-scale? comprehensive reform, a package of ideas that, in theory, satisfies the whole membership.

?I think we can come together and reach some amicable solutions that aren?t geographically based,? said Eichorst, who has also worked at South Carolina, Wisconsin and Miami, which gives him a 'fairly global perspective' of the recruiting issue. That?s valuable.?

This is all well and good. But, the mega powers in other leagues never will go for changing how college football recruiting is set up.

Five former Buckeyes will play in Super Bowl 50. That?s more than any other college in America.

OSU also had five players in Super Bowl 11 and 34.

This is some good news from Rutgers: The athletic department subsidy decreased in 2015, the school?s first season of Big Ten membership. I have to think this is a trend.

NJ.com reports that in order to fund a $70.5 million budget, the Rutgers athletics department was subsidized $23.8 million for the fiscal year 2015, according to the university's financial report filed to the NCAA. It marks a 34.5 percent decrease from the $36.3 million that Rutgers received in university, student-fee and government support in 2014. It also marks a 49.3 percent decrease from the record-high $46.9 million in subsidies that Rutgers athletics drew in 2013.

The quarterback spot at Penn State is open. Among the contenders: Tommy Stevens. Teammates offer analysis. I think Trace McSorley has to be the fav, right?

So, where does Michigan State?s Mark Dantonio stand on the issue of pulling scholarship offers?

"You do the best you can with your guys," Dantonio said. "Obviously, there are always problems that occur that you have to deal with. Those are program decisions.

"But I think when you offer a scholarship, you do your best to honor those situations."

Michigan still will be without Caris LeVert when the Wolverines take on Rutgers on Wednesday, but John Beilein says he?s getting closer to a return from a leg injury.

Michigan has gone 4-2 without LeVert. Imagine how it?ll do once he is back.

When asked about a co-coordinator possibility in late December, Darrell Hazell said he?d researched the roles and seemed to have a plan.

?I?ve talked to a couple people who are doing it right now, who have done it in the past, where if you do go co-defensive coordinator that he knows he has the final say when there is a dispute,? Hazell said in December. ?But I think lines have to clearly be defined on who?s presenting the plan and who?s calling the defense.?

Let?s hope it works. This defense was horrid last year, especially vs. the run.

The Minneapolis Star Tribune has one ugly measure of Minnesota?s horrific hoops season: RPI. It?s not the be-all-end-all when it comes to measure of a team. But, it?s a good indicator. Minnesota is ? 223.