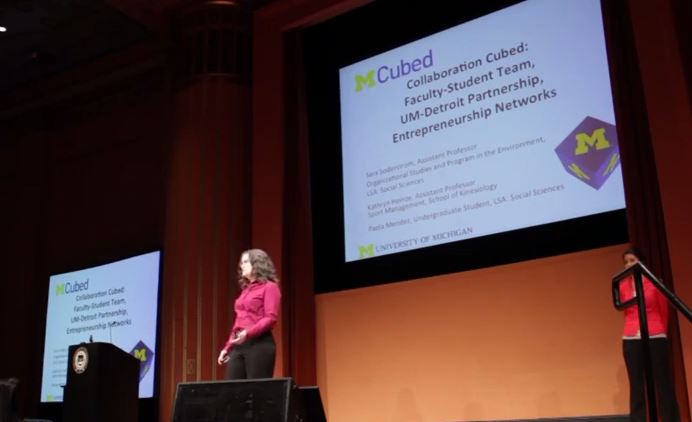 [btn-post-package]The universities of the Big Ten Conference are known for being trailblazers in higher education, but their achievements aren?t limited to the lecture hall. They also fund a vast array of research and are home to groundbreaking entrepreneurial centers.

Consequently, Reuters? most recent list of the 100 Most Innovative Universities in the World includes 11 B1G schools, including three in the top 10. According to Reuters, the institutes on the list ?most reliably produce original research, create useful technology, and have the greatest economic impact.?

Here?s where the Big Ten universities placed in the rankings:

Bringing together faculty from across a variety of schools, the Office of Research?s MCubed program encourages collaborative work by providing $15-60k in seed grant money. These awards allow research teams to ?explore high-risk approaches that might not attract immediate support from more traditional funding mechanisms.?

The Garage at Northwestern is a veritable playground of research, innovation and discovery. Providing students and faculty with academic and professional programming, entrepreneurial know-how, access to NUseeds funding and state-of-the-art facilities, The Garage was born of Northwestern?s commitment to experimentation.

By fostering a ?neighborhood of ideas, entrepreneurship, and opportunity?, Wisconsin?s University Research Park supports early-stage businesses across a variety of fields. As if that weren?t enough, URP contributes upwards of $825 million annually to Wisconsin?s economy.

Cited as one of the top 16 land-grant/ public universities in innovation and economic prosperity, OSU?s commitment to results-driven research recently landed the school and its collaborators more than $10 million in grants from the State of Ohio?s Third Frontier research development initiative.

Home to the Purdue Technology Center, one of the National Business Incubation Association?s top-rated programs, it?s easy to see why Purdue made the list. Last year saw a record 25 companies launched using the school?s intellectual property, from new cancer therapies to breakthroughs in concrete meant to improve our nation?s infrastructure.

Innovation has a long history at the University of Minnesota: It was the site of the first open-heart surgery and human bone-marrow transplants. The school reports that its alumni have launched more than 10,000 companies, which generated revenue of around $100 billion to date.

Maryland's public research university system receives more than $1 billion in external grants and contracts, much of which comes from the federal government. The university has extensive ties to the National Institutes of Health, NASA and the Department of Homeland Security.

One of the original nine ?colonial? colleges, Rutgers has been a pioneering educational institution since 1766. With $700 million-plus spent annually on research, Rutgers ranks among the top 30 schools in the nation. From preschool education to wireless communication, the quality and scope of Rutgers? research makes it one of only 62 schools in the Association of American Universities.