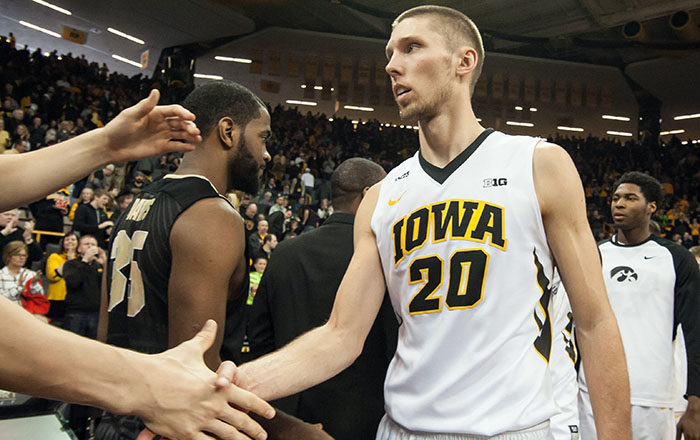 After Sunday?s domination of Purdue, is there any question that Iowa is king of the Big Ten? Of course not. Yes, I know all about Indiana, but its resume pales compared to Iowa?s.

Here is a look back at the week that was.

Biggest surprise: Nebraska. The Cornhuskers began the Big Ten season 0-3. Then, they won four in row-three of them on the road–the latest a surprising win at No. 11 Michigan State on Wednesday night. Nebraska fell vs. Michigan on Saturday, but it's still be a nice reversal of fortunes for Tim Miles? crew.

Biggest disappointment: Northwestern. The Wildcats emerged as a Big Ten ?darling,? improving to 15-3 overall and 3-2 in the Big Ten after a win vs. Wisconsin on Jan. 12. But the Wildcats subsequently lost three in a row, including a 32-point beat down Saturday at Indiana. And things won?t get any easier with games vs. Michigan State and at Iowa next.

Top stat line: Denzel Valentine all-around gem vs. Maryland. The Michigan State star flirted with his third triple-double of the season Saturday vs. No. 5 Maryland, putting up 19 points, a career-high 14 rebounds and eight assists in a must-win game.

Top moment: Matt Costello celebrates big win vs. Maryland. Nursing an ankle injury, it wasn't known if the Michigan State senior would be able to suit up Saturday vs. the Terrapins. He suited up, all right, finishing with 15 points, 12 rebounds, three blocks and two steals. As Costello went to the bench in the closing seconds, he picked up Tom Izzo and twirled him in the air, a wonderful moment that perfectly sums up the emotion of college athletics.

This is EPIC! Watch @MSU_Basketball's Matt Costello lift Tom Izzo and twirl him around as MSU beats Maryland. https://t.co/U9AeSe2G6v

Top dunk: Jarrod Uthoff's driving left-handed flush vs. Purdue. Uthoff is tall and extremely long, so his dunks often look effortless. This dunk, not to mention the crossover dribble to make it possible, was a beautiful thing.

Top shot: Denzel Valentine's banked 3-pointer vs. Nebraska. I don't know how Valentine made this shot, and I'm pretty sure he doesn't know either. Regardless, it went in – even if it needed the help of the backboard.

Top milestone: Yogi Ferrell sets Indiana's career assist mark vs. Illinois. Indiana has had no shortage of talented point guards in its storied history, but none has tallied more assists than Ferrell, who supplanted Michael Lewis atop the program's record book Tuesday night.

Top fashion statement: Michigan State's Nike Hyper Elite alternate uniform. The neon design received more than its share of attention on social media leading up to Saturday night's game vs. No. 5 Maryland. The attention picked up even more steam during warmups (shooting shirt with vest) and pretty much continued throughout the game.

Top fan: Iowa quarterback C.J Beathard was impressed by the Hawkeyes' quick start to the second half Sunday afternoon, and the BTN cameras caught his approval.

C.J. Beathard seems to be enjoying this @IowaHoops run. pic.twitter.com/o0kq1f7Kax

Did you see this? #AveryStrong day at Nebraska. Former Nebraska assistant Chris Harriman is now at New Mexico, but that doesn't mean the team can't continue its #AveryStrong movement. The Cornhuskers honored Avery, Harriman's son who has beat leukemia multiple times, Saturday afternoon. The Nebraska coaching staff and fans wore the familiar #AveryStrong t-shirts, and Avery helped lead the team out of the tunnel, right ahead of his friend Shavon Shields.

Game day! Huge game for Lobos today. Got a few mins to catch my hero on TV at the Hotel! #AveryStrong #ThankYou #GBR pic.twitter.com/5In5XiQpBB

Stock up: Indiana. Yes, the Hoosiers have gotten a break in the schedule. Still, IU is destroying teams. The Hoosiers are off to their first 7-0 Big Ten start since 1992-93. They've won consecutive conference games by more than 20 points for the first time since January 2007. Indiana has matched its longest winning streak since Tom Crean's arrival in 2008 and is one win from matching the school's longest winning streak since Bob Knight was fired in 2000.

Stock down: Michigan State. At one point this season, The Spartans were ranked No. 1 and were off to a school-best 16-0 start. But Michigan State stumbled through a three-game losing skid before ending this week with a huge home victory vs. No. 5 Maryland on Saturday to end its misery. The Spartans are 4-4 in the Big Ten, with little wiggle room if they want to stay in the league championship hunt.

Jarrod Uthoff scored 13 of his 22 points in the first half and ninth-ranked Iowa toppled No. 22 Purdue 83-71 Sunday for its ninth straight win.

Purdue freshman Caleb Swanigan had 12 points and 13 rebounds, and the Boilermakers held a 63-23 advantage on the boards in beating Rutgers 107-57 on Monday.

Shavon Shields scored 28 points, playing through hip pain, to allow Nebraska to hold on for a 72-71 win over No. 11 Michigan State on Wednesday night in East Lansing. He had left the game with a hip injury in the first half.

Malcolm Hill had 28 points and 10 rebounds to lead a late surge by Illinois to beat Minnesota, 76-71, in overtime on Saturday night, ending an eight-game losing streak on the road for the Fighting Illini.

Zak Irvin had 19 points and 11 rebounds, and Michigan overcame uncharacteristically poor shooting to hold off upset-minded Minnesota, 74-69, on Wednesday night.

Ethan Happ had 20 points and 11 rebounds and Wisconsin held off Penn State for a 66-60 win on Thursday night.

Minnesota?s Nate Mason had 25 points in a 74-69 loss at Michigan on Wednesday.

Duncan Robinson scored 21 points, leading Michigan to an 81-68 win over Nebraska on Saturday.

Iowa is 7-0 in the Big Ten for the first time since 1969-70. Six of the Hawkeyes? league wins have been by double-digits, including two vs. Michigan State and one vs. Purdue.

With the win vs. Purdue, the Hawkeyes improved to 7-3 against teams ranked in the top 50 of the RPI. And Iowa has won 13 straight at home.

The Hawkeyes No. 9 ranking is the highest since Fran McCaffery took over in 2010, and the higheset since a No. 7 in November 2001. It also marks the third time Iowa has had its football and basketball teams ranked in the top 10 in the same season.

Northwestern?s OT loss at Maryland on Tuesday was its first road defeat of the season. They were 4-0 on the road, their best start since 1930-31.

The win at Michigan State on Wednesday was the Cornhuskers? third straight in conference games on the road. That last happened in 1998 when they were in the Big 12.

Michigan has won all six meetings with the Huskers since Nebraska joined the Big Ten in 2011. Its win at Nebraska on Saturday was the team?s sixth straight game without senior guard Caris LaVert, who has a lower left leg injury. Before the injury, he was the team?s leading scorer at 17.6 points a game.

Illinois ended an eight-game road losing streak at Minnesota on Saturday. Prior to that win, the Illini had last won on the road at Michigan State, 59-54, on Feb. 7, 2015.

Indiana has won three straight home games by 25 or more points for the first time since 1987-88.

"There's blood in the water right now. The sharks are coming." – Michigan State?s Tom Izzo, after a 72-71 home loss to Nebraska on Wednesday, the Spartans? third defeat in a row.

"This is not gloom and doom right now. Anybody can paint it the way you want to paint it. Our guys, we have a job to do. We stay together, we keep our spirits up and we have coaches good enough to keep our spirits up in practice, and we move forward." – Rutgers coach Eddie Jordan, after a 50-point loss to Purdue on Monday.

"That's really big for our program. They're a great team." – Nebraska?s Shavon Shields, after a 72-71 win at Michigan State on Wednesday.

"I didn't know he was going to do that. But that was pretty special." – Indiana?s Yogi Ferrell, after Tom Crean grabbed his hand and raised it when Ferrell checked out late in the game after setting IU?s career assist mark.

"They have a lot of guys who can put pressure on you with their driving ability and everyone can shoot. I mean they've made 32 3s in the last two games. It's incredible shooting." – Northwestern coach Chris Collins  on Indiana, which beat his Wildcats on Saturday

"Some nights things don't go well and you've just got to figure out a way to win. And we did that." – Maryland coach Mark Turgeon, after a 62-56 win vs. Northwestern on Tuesday in which the Terps made fewer baskets, got outrebounded and were not as tough as NU and still won, 62-56, in OT.