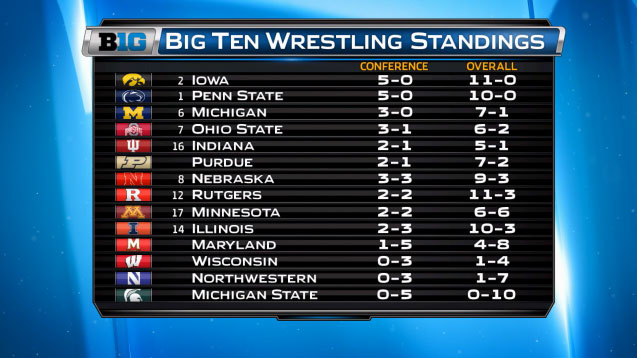 There are common denominators that most successful wrestlers possess. They are dedicated. They train hard. They are focused and understand how to limit and deal with distractions. But perhaps most importantly, the great ones don't make excuses.

College wrestling in the Big Ten is about results. You either get the job done in that particular match or you don't. It's really that simple. Of the thousands of wrestling interviews I have listened to over the years there is one that will always stand out to me. It was with former Nebraska great and World and Olympic champion Jordan Burroughs. Two years ago at the World Championships Burroughs was clearly hampered by a knee injury and suffered a semi-final loss.

When the injury came up during interviews following the defeat, Burroughs quickly discounted the notion and said, ?Being healthy is part of being great.?

It is without a doubt one of my favorite quotes of all time because it is so true. Jordan then came back to win the bronze medal and of course picked up another gold at this past September at the 2015 World Championships. Every match has a completely different set of circumstances. You have to find a way to navigate through things and figure it out regardless of the situation. You're coming off the flu? Nobody cares. You have a sore knee? Nobody cares. Things in your personal life have been a struggle? Nobody cares.

It may sound harsh, but the great ones embrace this mentality. They understand that excuses have no place. In the Big 10 your opponents don't care about your challenges. They just want to come out and beat you. It just reiterates how mentally and physically tough one must be to separate themselves at this level.

Penn State continues to roll. Last week the Nittany Lions beat Nebraska and Northwestern to remain unbeaten in Big Ten duals. Zain Retherford at 149 pounds continues to dismantle the competition and earned ?sprinkles on his ice cream? for his performances last weekend. Retherford scored major decisions over a pair of top five ranked guys. He beat Jake Sueflohn of Nebraska 12-3 and then followed that up with a 15-5 major over two-time Big Ten champion Jason Tsirtis of Northwestern.

Retherford took Tsirtsis down six times and rode him for over three minutes. The Penn State sophomore is 19-0 with seven pins, five tech-falls and 4 major decisions. He is so good in all positions. He's very good on his feet with attacks to both sides and a monster on top. I could go on and on about Retherford.

Penn State has a big match at Illinois on Saturday afternoon on BTN/BTN2Go at 4 p.m. ET. Although Illinois is 1-3 in the Big Ten, they may match up pretty well against the Nittany Lions. The match everybody is talking about is at 157 pounds with No. 1 Isaiah Martinez and No. 3 Jason Nolf of Penn State. Martinez has smashed his way to a 19-0 record with 14 tech-falls. Nolf brings with him an impressive 20-0 mark. Huff Hall will be rockin'!

Another big match will be at 174 pounds where top-ranked Bo Nickal squares off with No. 5 Zac Brunson. Brunson returned to the Illinois lineup last weekend after missing time with an injury. If Illinois is going to upset Penn State, Brunson will have to step up big. A couple other big matches are at 133 with Ilinois Zane Richards (No. 2) and Jordan Conaway (No. 5) and also at 165 pounds with No. 6 Steven Rodrigues for Illinois and No. 16 Shakur Rasheed for the Nittany Lions. Rodrigues is up three weight classes from 141 and having a great season. His lone loss was a close one to Ohio State's Bo Jordan.

You can't go against Penn State with all their horse power, but this has the makings of being a really good dual. Between the two teams there are four top-ranked wrestlers and a handful of guys ranked in the top five.

Indiana is ranked 16th in the dual meet rankings after a win against Maryland last Friday. The Hoosiers have shown great improvement in picking up their second conference victory for the first time since the 2009-2010 campaign. Led by Nate Jackson at 174 (No. 6), Indiana is at Michigan State tonight on BTN at 7 p.m. ET. Watch the video in this post for more on that.

In other happenings around the conference, Iowa (5-0 in the Big Ten) is home tonight against Purdue and at Nebraska Sunday. The Hawkeye's clubbed Wisconsin last Friday night in Madison 31-3. Iowa has won 17 consecutive conference duals and 41 of its 50 individual matches.

World Champion Kyle Snyder took the mat for the first time this season to help Ohio State beat Nebraska. The original plan was for Snyder to make his season debut against Penn State in early February, but with the match tied at 17 going into the final match at heavyweight, Snyder scored a major decision to give Ohio State the 21-17 win.

Student U grabbed @wrestlingbucks HC Tom Ryan to talk about their win over @HuskerWrestling https://t.co/rKV7rGSxeg

The Gophers edged Rutgers last Sunday in Minnesota 17-16. At 141 pounds Tommy Thorn who was ranked 12th beat then No. 4 Anthony Ashnault 8-1. The win vaulted Thorn to No. 8 while Ashnault fell to No. 6. The Gophers wrestle Purdue at home on Sunday.

More highlights from last week below:

Check out a few highlights from today's win over Maryland, courtesy of @BTNStudentU #AlwaysAggressive https://t.co/I4igieTbba