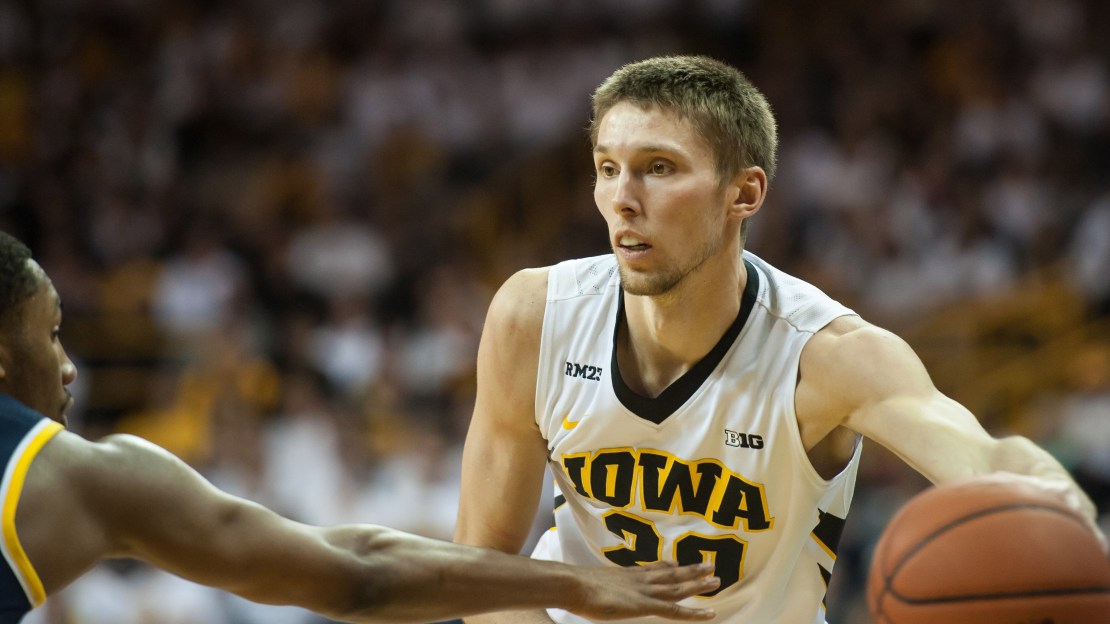 It's been a collective effort for the Hawkeyes, but there's no doubt that senior forward Jarrod Uthoff has been the key. The Iowa star is playing so well that he has taken the top spot from Maryland point guard Melo Trimble in my latest Big Ten Player Rankings.

Editor's note: All stats are through Sunday, Jan. 17 action.

1. Jarrod Uthoff, Iowa. The fifth-year senior has been efficient at both ends of the floor all season, but he's picked things up since the calendar flipped to conference play. In five league games, Uthoff trails only Yogi Ferrell in scoring (19.6) and paces the league in blocks (3.6). He is shooting 40.9 percent from the beyond the arc and 80.8 percent from the line, to boot.
Last week: 2

2. Melo Trimble, Maryland. With so many weapons around him, Trimble continues to excel as a distributor for the third-ranked Terps. He averages 5.5 assists per game in conference play and always puts his teammates in great positions to score. He has struggled shooting the ball over the last few games, connecting on 12 of his last 30 attempts (40 percent), and wasn?t able to deliver late in a close loss at Michigan.
Last week: 1

3. Denzel Valentine, Michigan State. Valentine did not have his legs or great stamina in a home loss to Iowa, but he made major strides in a heartbreaking loss at Wisconsin. Valentine, who scored 23 points, to go along with seven rebounds, five assists and two steals, looks to be a few games away from returning to form.
Last week: 3

4. Yogi Ferrell, Indiana. Indiana struggled early on the road in a victory over winless Minnesota, but Ferrell took over in the second half and made game-winning plays by attacking the paint. He did it all, registering 20 points, six rebounds and seven assists, and Indiana remained undefeated because of the play of their senior leader.
Last week: 5

5. A.J. Hammons, Purdue. Hammons hasn't double-doubled since a Dec. 22 win vs. Vanderbilt, but he is averaging 15 points, 6.8 rebounds and two blocks in five conference games. He's started the last three games, as well, after coming off the bench in each of the first 13 games.
Last week: 4

6. Nigel Hayes, Wisconsin. Finally, a dominant performance by Hayes when the Badgers needed him the most. Wisconsin needed a signature win, and Hayes delivered with a 25-point, seven-rebound gem in the dramatic win vs. then-No. 4 Michigan State on Sunday afternoon.
Last week: 7

7. Diamond Stone, Maryland. Stone and the Terps were not happy with their loss at Michigan, and so they took out their frustrations on Ohio State, blasting the Buckeyes 100-65. In his first six Big Ten games, the heralded freshman is averaging 18.7 points, on 66 percent from the field, 7.7 rebounds and 0.9 blocks.
Last week: 6

8. Andrew White III, Nebraska. White and Nebraska have rolled to three conference wins in a row. The Kansas transfer is the best rebounding guard in the league, pulling down eight boards per contest in Big Ten play, which ranks second overall. In the win at Illinois, White notched his first career double-double (21 points, 13 rebounds).
Last week: 10

9. Bryant McIntosh, Northwestern. Just when Northwestern found its offensive rhythm, Penn State came to Evanston and humbled McIntosh and the 'Cats. McIntosh leads the Big Ten in assists (8.2 in conference play), but his play over the next few weeks against ranked teams will go along way in determining Northwestern?s fate.
Last week: 9

10. Robert Carter Jr., Maryland. Carter has found his rhythm lately and is back on this list. The versatile forward averages 14.2 points and 6.7 rebounds. He hit all four of his attempts from downtown vs. Ohio State, and if his outside shot continues to fall, Maryland will be difficult to slow down.
Last week: NR