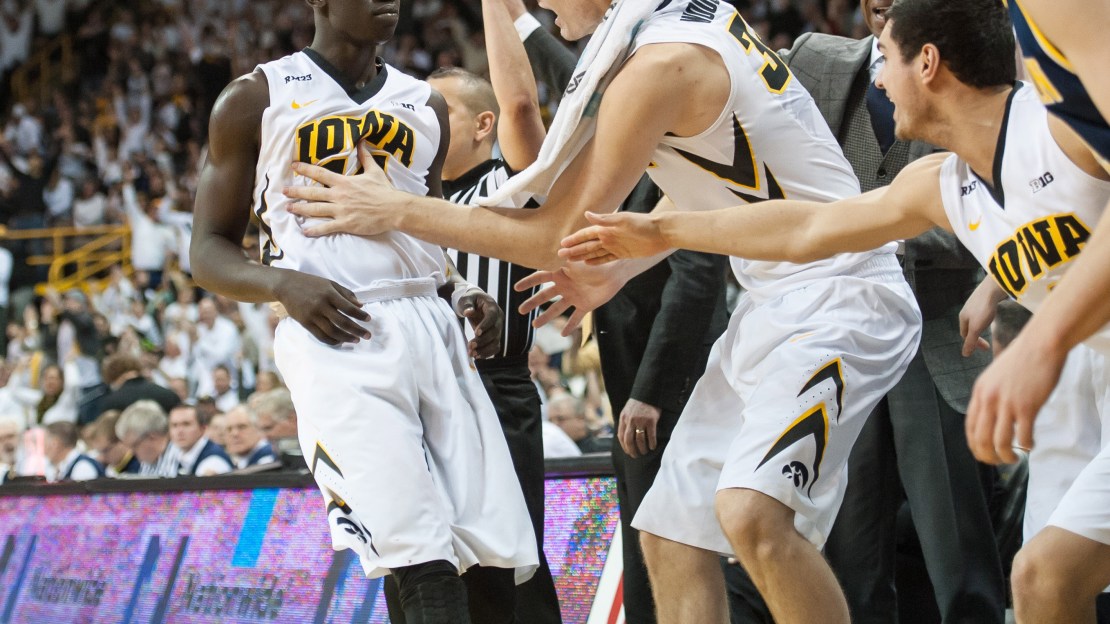 It was a big week for Iowa, which solidified its status as the team to beat in the Big Ten with a rousing triumph at No. 4 Michigan State on Thursday and a victory over a hot Michigan club on Sunday.

And keep an eye on Indiana, which has won 10 in a row, and is tied with Iowa atop the Big Ten standings after the first three weeks of conference play.

Biggest surprise: Nebraska. How about those Cornhuskers? After opening Big Ten play with losses to Northwestern, Indiana and at Iowa, the Huskers responded by winning at Rutgers, vs. Minnesota and at Illinois. NU will need the mojo with upcoming games at Michigan State, vs. Michigan, at Purdue, vs. Maryland.

Biggest disappointment: Michigan State. The Spartans looked to have righted themselves after an 83-70 at Iowa with three victories in a row. But then Michigan State went out and lost two games. First, MSU got whipped at home on Thursday by the Hawkeyes, 76-59. Then, the Spartans lost 77-76 at Wisconsin on Sunday. It wasn?t that long ago that Michigan State was No. 1 in the nation. Now, the Spartans are 3-3 in the Big Ten and looking up at Indiana, Iowa, and Maryland.

Top play: Ethan Happ game-winner vs. No. 4 Michigan State. The redshirt freshman is having a terrific season, and there's no doubt this up-and-under move is his brightest moment yet.

Top dunk: Eron Harris vs. Iowa. Admit it, you thought Harris was going to put up the 3-pointer here. Iowa did, too, and Harris took advantage, driving in for the posterizing flush.

Top sequence: Troy Williams block and putback at Minnesota. Few players in the nation can top Williams athleticism, and the Indiana forward put his skills on perfect display on this pretty sequence.

Top stat: The Hawkeyes became the first team since Duke and Kentucky in 1965 to beat the same top-five opponent (Michigan State) by at least 10 points in a given season.

Stock up: Iowa. The Hawkeyes have emerged as the team to beat in the Big Ten, riding a seven-game winning streak. No team has four more impressive league victories, as Iowa already has swept Michigan State, won at Purdue and topped Michigan. A big part of the Hawkeyes? success is Jarrod Uthoff, who has emerged as the Big Ten?s top player. Also, props to Indiana, which has won 10 in a row.

Stock down: Minnesota. It?s going from bad to worse for the Gophers, who have lost seven in a row and 10 of 11. The Golden Gophers last won on Dec. 16, vs. Chicago State. The good news: Minnesota still has two games left vs. fellow Big Ten-winless school Rutgers. Gotta mention Northwestern, which suffered a crushing 71-62 home loss to Penn State on Saturday. This won?t help an NCAA resume that also includes a home defeat to Ohio State.

Iowa?s Jarrod Uthoff posted a double-double (15 points and 10 rebounds) in Iowa?s 76-59 win at Michigan State on Thursday, and followed it up with a 23-point effort in an 82-71 win over Michigan on Sunday.

Wisconsin?s Bronson Koenig tallied 27 points in a 77-76 win vs. No. 4 Michigan State on Sunday. The win was Wisconsin's first vs. a ranked team since interim coach Greg Gard took over in mid-December and it snapped a three-game conference losing streak.

Michigan?s Zak Irvin scored 22 points in a 70-67 win vs. No. 3 Maryland on Tuesday, as the Wolverines won with star Caris LeVert-the team?s leading scoring–out with injury for a third straight game.

Andrew White III scored 21 points and had 13 rebounds Saturday to lead Nebraska past Illinois, 78-67, in Champaign. It was the Huskers? third win in a row.

Robert Carter Jr. scored a career-high 25 points, Rasheed Sulaimon notched a season-best 22 and No. 3 Maryland rebounded from its first Big Ten defeat of the season by whipping Ohio State, 100-65, on Saturday.

Brandon Taylor had 19 points in Penn State?s 71-62 victory at Northwestern on Saturday.

Nebraska?s Shavon Shields scored 19 of his 24 points in the first half of an 84-59 blowout of Minnesota on Tuesday.

Bryant McIntosh notched 28 points to lead Northwestern to a rare triumph vs. Wisconsin, 70-65, on Tuesday. McIntosh scored all but eight of his points in the second half as NU beat the Badgers for just the third time in 17 games.

Purdue?s A.J. Hammons surpassed the 300-career block number on Wednesday vs. Penn State. He is the nation's active leader in blocks with 301, making him only the second player in school history with 300. The Boilermakers' career leader is Joe Barry Carroll (349), who was the No. 1 overall pick in the 1980 NBA draft.

Ohio State is 4-2 in Big Ten play, with its two losses coming by a combined 60 points.

The Badgers are 2-4 since Bo Ryan abruptly announced his retirement immediately after the Badgers' victory over Texas A&M-Corpus Christi on Dec. 15.

The Wolverines' win over Maryland was their first at home over a top-five team since 1997.

Nebraska beat Minnesota, 84-59, on Tuesday to give the program consecutive wins in conference games by more than 20 points for the first time since January of 1981. Nebraska defeated Rutgers 90-56 Saturday.

The Boilermakers are the only Division I team that has outrebounded every opponent this season.

Yogi Ferrell's seven assists at Minnesota on Saturday moved him past Quinn Buckner for second place on Indiana's career list with 544, one behind record holder Michael Lewis.

C Alex Olah (foot) returned to action Saturday for Northwestern after missing six straight games. He finished with five points and two rebounds in seven minutes in a home loss to Penn State.

Dating to last season, Iowa has won 11 straight regular-season conference games, its longest such streak since 1970.

The Gophers have lost seven in a row and nine of their last 10.

Nebraska?s Shavon Shields started his 100th consecutive game on Tuesday, and is second in program history behind Dave Hoppen, who started all 111 games he played from 1982-86.

The Hawkeyes beat Michigan State on the road on Thursday for the first time since 1993, ending an 18-game losing streak.

"He was just magnificent. Forget about guards, he's one of the best players in the Big Ten. You ask coaches in this league, this kid is an elite, elite player." – Northwestern coach Chris Collins, on Bryant McIntosh, who scored 28 points on Tuesday in a win vs. Wisconsin.

"He's not back to normal." – Michigan State coach Tom Izzo, on Denzel Valentine, after a 76-59 home loss to Iowa on Thursday.

"To beat one of the best teams in the Big Ten on their home court is big. It doesn't matter what happened 23 years ago." – Jarrod Uthoff, after Iowa?s 76-59 win at Michigan State on Thursday, the Hawkeyes? first in East Lansing since 1993.

"I'm extremely (ticked) right now with the way things are going. Got to push the guys and guys will push me. We'll start to do things the right way and get some wins." – Wisconsin?s Nigel Hayes, after a 70-65 loss at Northwestern on Tuesday.

"He was the straw that stirred the drink tonight, no question about it." – Rutgers coach Eddie Jordan, on Ohio State?s JaQuan Lyle, who had a triple-double on Wednesday vs. RU.