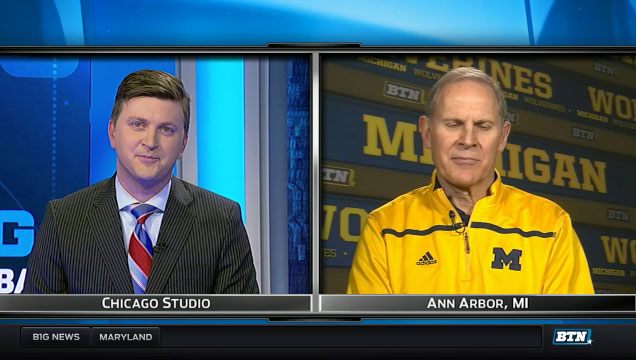 The great Loren Tate of the Champaign New-Gazette is spot on here: The Big Ten hoops chase looks like two clear camps with six that look headed for the Big Dance in Maryland, Michigan State, Indiana, Iowa, Purdue and Michigan. And eight that don?t.

And you really have to like the chances of Michigan State and Indiana to excel, thanks to nice Big Ten scheduling. Tom Crean?s high-scoring Hoosiers don?t face Michigan State, Maryland or Purdue until February, and then just once each. If Yogi Ferrell stays healthy, Indiana shouldn?t lose a game this month. All the Hoosiers have to do is defeat Illinois and Northwestern at home, Wisconsin in Madison and Minnesota twice. With all the doubles against weak members, a 14-4 league record appears not only possible, but likely for Indiana.

And don?t look for Michigan State to tumble far even with the loss last night. The Spartans have Denzel Valentine back, and they?re playing Maryland, Michigan, Indiana and Purdue just once apiece. Of 18 games, the Spartans play just four against those quality rivals.

By contrast, Iowa?s Hawkeyes, off to a 4-0 start, play nine games against other members of the "Top Six."

Oh, and it?s official: Iowa is the team to beat in the Big Ten after drubbing Michigan State for the second time in less than a month. The Hawkeyes also dumped Purdue in West Lafayette. In case you were wondering, Iowa hasn?t won the Big Ten regular-season title since ? 1979.

The win in East Lansing last night was Iowa's first since 1993, back when I had a full head of hair. That?s how long ago it was.

Anyone who watches Michigan hoops knows the big men aren?t the best part of the team. But Mark Donnal is emerging as a reliable weapon. And that?s one reason why the Wolverines are making a push.

That status is the culmination of Donnal going from the Wolverines' early-season starter, to a backup, to the fourth center off the bench, to a member of U-M scout team, back to the rotation and back to the starting lineup.

I talked to Northwestern star Bryant McIntosh this week. Good kid and a rising talent. InsideNU.com has a good, in-depth and exhaustive piece on McIntosh, who knows he is the guy.

"He's just so smart," McIntosh's father, Scott, says of his son. "He's so much smarter than most people his age when it comes to basketball."

The triple-double by Ohio State?s JaQuan Lyle on Wednesday was impressive. More important: What could it mean for the program moving forward?

With Ohio State now entering a two-game road swing against No. 3 Maryland and No. 24 Purdue, the Buckeyes need Lyle at his best to have a chance at being in those games and hopefully steal one. A win like that would be a big boost to a tournament resume that's had the Buckeyes pretty much just off the bubble all year.

Big shake up for the Ohio State grid staff. The big takeaway: OC Ed Warinner will remain in the booth calling plays, while new hire Greg Studrawa will coach the o-line-which is what Warinner used to do. Smart move, as the offense really took off the last two games with Warinner upstairs calling plays. Then again, by then, the staff also had decided to stick with J.T. Barrett at QB, which certainly played a big part in the offense taking off.

The march out of Penn State is getting alarming. Players like Geno Lewis, Troy Reeder, Daquan Worley, Gary Wooten are transferring from the program. Plus, DC Bob Shoop and offensive line coach Herb Hand took off. Add RB Akeel Lynch to the growing list. So, who will back up Penn State RB Saquon Barkley? Bob Flounders of Pennlive.com has a good breakdown of the candidates.

Few schools have as many big holes to fill as Michigan State. Mlive.com takes a look at how the program will try to fill its eight biggest holes. And none is bigger than the one left at QB by Connor Cook.

This is interesting: Tom Osborne and Lawrence Phillips exchanged letters late last year. Osborne wrote another letter in December. He never heard back. Osborne was surprised by news of Phillips' death Wednesday.

"I never got any indication that he had lost hope or given up,? Osborne said. ?But when you?re that far away, it?s hard to know just from a letter what?s going on.?

Good piece from Scott Dochterman of the Cedar Rapids Gazette, as he talked to Iowa A.D. Gary Barta about Kirk Ferentz?s performance, 2016 tickets and night football.

I?ll just say this: What a difference a year makes.