2016 Football Forecast: An early prediction in the Big Ten East 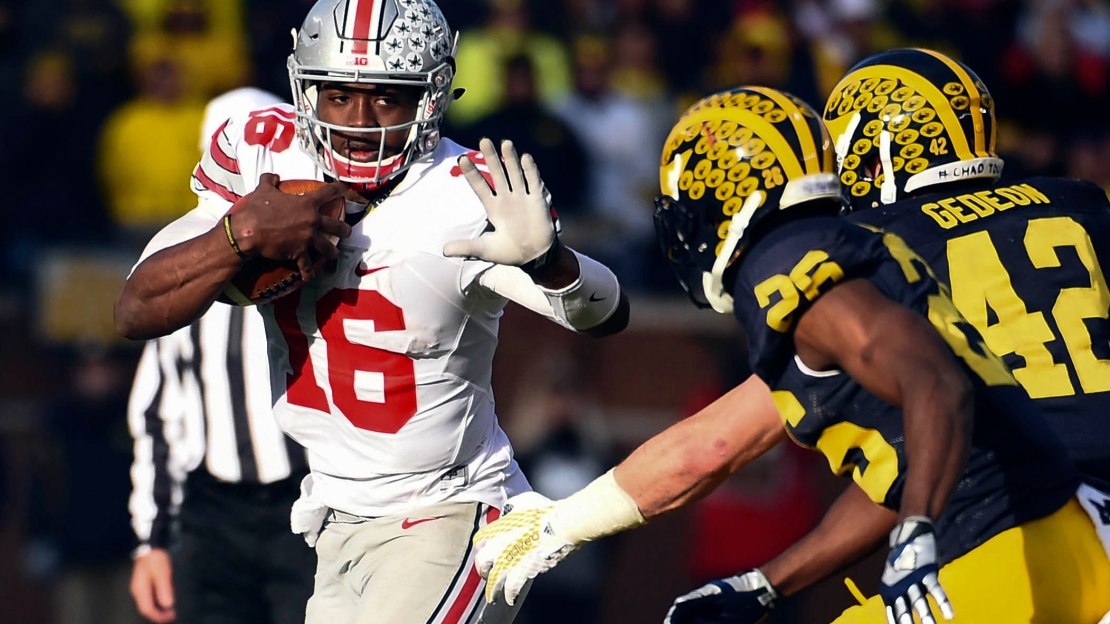 With the 2015 season officially in our rear-view mirror, let?s take an early peek into the fall of 2016 and how it may look in the end. Today, I present my premature forecast for the Big Ten East.

After my choices, we've included an opportunity for you to add your own Big Ten East predictions No. 1 through No. 7 to the overall fan ranking.

1. Ohio State. The Buckeyes took some big hits, seeing nine players declare early for the NFL drafts after a "woulda, shoulda, coulda" season. Players like DE Joey Bosa, WRs Jalin Marshall and Mike Thomas, LB Darron Lee and RB Ezekiel Elliott, among others, bid adieu early to Columbus. But there?s still talent along the banks of the Olentangy River. There?s always talent these days. And it begins with QB J.T. Barrett, the best signal-caller in the Big Ten. Oh, and as long as Urban Meyer is prowling the sidelines in his red windbreaker, I?m going with the Bucks here next fall.

2. Michigan. The Jim Harbaugh hype machine is still running in overdrive, fueled by a surprising 10-3 season that actually made khakis cool. (I didn't think it was possible.) But are the Wolverines really ready to win the rugged Big Ten East? Not yet, but soon, Grasshopper. Soon. There still is a talent deficiency in Ann Arbor. Harbaugh is closing the gap, but he still may be a recruiting class or two away. The offense needs to find a QB with Jake Rudock gone and they need  a more consistent ground game. The defense also needs more athletic ability along the front seven.

3. Michigan State. Few programs have been as productive the last six years, as the Spartans have won double-digit games five times in the last six years. It?s difficult to slot Michigan State this low, but Mark Dantonio has some big holes to fill. And, hey, ?Mike Dantonio? can thank me for making that chip on his shoulder a tad bigger. (You?re welcome.) Connor Cook leaves as the school?s best quarterback ever. The offensive line lost its two best blockers, and top WR Aaron Burbridge is gone. That's all. Oh, and sleek end Shilique Calhoun?s pass rushing is gone from a defense that lacked its usual edge in 2015 and needs to button up in the back end.

4. Penn State. Year Three under James Franklin will be pivotal. Let me type that again: Year Three under James Franklin will be pivotal. Progress must be shown after consecutive 7-6 seasons. Franklin has hyped his program very nicely. Now, it?s time to deliver on the bluster. The program is back to a full allotment of scholarships, but the roster still trends young. On top of that, questions nag the offense. Will the line be better? Is there an adequate replacement for QB Christian Hackenberg, as the offense transitions to a new coordinator and altered scheme? And the defense also has a new leader with coordinator Bob Shoop off to Tennessee. That?s a humongous loss. It?s going to be an interesting 2016 in State College.

5. Indiana. Kevin Wilson is all smiles. Why not? He has a sweet new contract that gives him some security and has all sorts of mojo coming off the program?s first bowl since 2007. It?s good to be Kevin Wilson, who has this program on as solid of footing as it has been since the Bill Mallory era. Now what? Can he build on last year and move up the food chain in the brutal Big Ten East? Some big holes stare back at Wilson, with QB Nate Sudfeld and RB Jordan Howard gone. And will Wilson ever cobble together a respectable defense?

6. Maryland. Hope floats with the arrival of D.J. Durkin as head coach. He coordinated a boffo defense at Michigan before landing this gig. Good thing, because this defense needs help. The return of CB Will Likely is nice. And unless the offense cuts back on coughing up the ball, progress will be difficult in 2016. Durkin needs to pump up the roster and develop a more physical squad in the trenches. But know this: Maryland teems with potential based on improving facilities and recruiting base. I?ll call the Terps a ?sleeping giant.? There. I did it. Are you happy?

7. Rutgers. Like Maryland, RU turned to a Big Ten defensive coordinator who never has been a head coach to lead its program. Interesting, isn?t it? Chris Ash arrives with a glistening resume from Ohio State. The dysfunction ran deep at this school, where Ash needs to settle a program rocked by off-field issues. The good news: He has more talent to work with than you think. And the offense could be pretty fun, if a quarterback is found to run it. Goal No. 1: Beat who you are supposed to beat.

Now it's your turn. Use the Survey Monkey ranking tool below to tell us what you think and to see what the collective has voted for so far.