Bryant McIntosh Q&A: 'I need to continue to just work on my game' 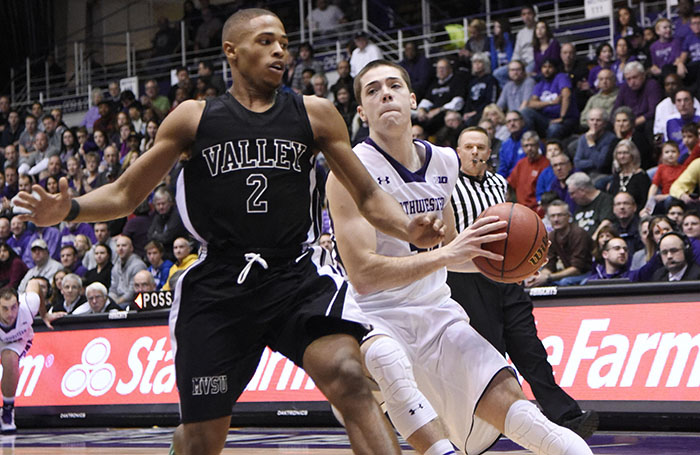 Northwestern has never made the NCAA tourney. How many times have you heard that factoid? It is one of the longest and most notorious droughts in sports. And, it just may end this year. If it does, you can thank Wildcat guard Bryant McIntosh.

As a freshman, McIntosh averaged 11.4 points and 4.7 assists, offering a glimpse of his skills. I caught up with McIntosh a day after NU scored its second Big Ten in a row, taking a 70-65 win vs. Wisconsin on Tuesday.

Q: How big was the win vs. Wisconsin on Tuesday?
A: It was a big win for us. It was a big conference game, our first (Big Ten) win at home. We hadn?t beaten them at home since like 2009, I believe. So it was a big win for our program. We have two wins in a row in the Big Ten. It is a good building block we can build on. I felt like we showed a lot of growth.

Q: Does the team have a mantra?
A: Two things we say. One is, we have to have each other?s backs. Our thing is, we are a family. We just want to go out and have fun and play with a passion that coach always talks about. And we also talk about family. Those are things we talk about before going onto the floor.

Q: What is your role on the team?
A: My role has changed since (Alex) Olah got hurt. I have had to be more aggressive offensively, looking to make more plays. And I am comfortable doing that. I am running the team and being the floor general that we need to win. I have had two 30-point games, so I have had some big scoring games. I also have had games where my job was to facilitate and get guys open looks. There isn?t a need to rely on me to score a lot every game. We have other guys who can score, too. It makes my job a lot easier.

Q: Any players surprised you with their development?
A: I am happy with the growth of a guy like Scott Lindsey. He is continuing to take strides to become better. He has helped us out a lot. Sanjay Lumpkin has made a huge leap from last year and is taking pride in being a defensive stopper and knock-down open shooter. Aaron Falzon's growth as a shooter and in getting to the basket and rebounding has really been a big thing for us this year because of our injuries. We needed guys who can come in and rebound and he has done a good job of that.

Q: What?s the best part of playing for Coach Collins?
A: The freedom and confidence he puts in you. I had it going vs. Wisconsin, and he kept running things for me. If you have a shot, you have the freedom to take it. Or if you have a play, go make it.

Q: What do you still want to improve at?
A: I want to get better defensively. And I need to continue to work on my game, small things I can become better at. I can become a more consistent shooter and a better ball handler. I can become better at late-game situations. That is one of the bigger steps I can take. Every game in the Big Ten will usually become close. The guys who understand how to win late games and manage those will win.

Q: How often does the team mention the NCAA drought?
A: There isn?t really a discussion here. Coach just talks to us about coming in and putting on our hard hat each day. At the end of the year, we?ll get what we deserve. If we deserve to make the NCAA tourney, we will. If we don?t, we won?t. That has been our focus. It would be very cool to make it. That is the dream of every college player, to make the tourney. We have done a good job of winning the games we are supposed to this year. We have to handle our conference schedule and see what we deserve at the end.

Q: How did a kid from Greensburg, Ind., end up at Northwestern? You originally committed to Indiana State but ended up at NU.
A: Coach Collins did a good job recruiting me. They made me a really high priority. I enjoyed hearing what they had planned for me. I trusted them. The local schools recruited me, but not to my satisfaction. Purdue offered me. Indiana was recruiting me, but I committed before anything developed.