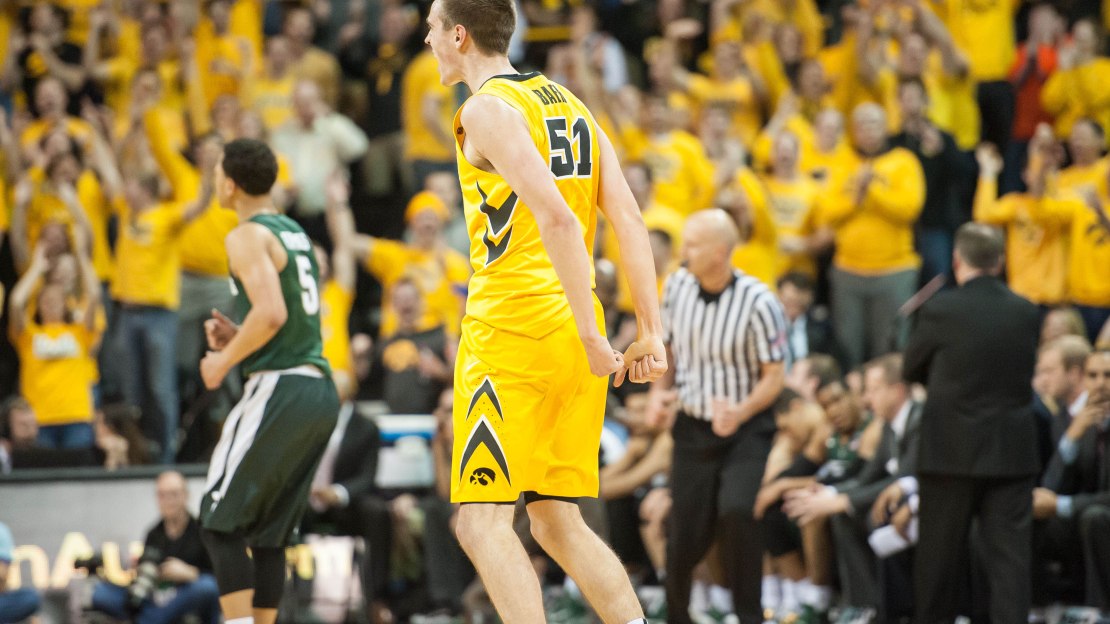 Indiana, Iowa and Maryland sit atop the Big Ten standings, all unbeaten in league play. The Hoosiers and Terrapins are 4-0 in Big Ten games, while Iowa is 3-0. Indiana and Maryland have both won nine straight games, while the Hawkeyes have claimed five consecutive wins. Best of all, two of these teams meet this week, with Iowa playing at MSU. It?s gonna be sweet.

See my game rankings for the third week of Big Ten play below.

1. Iowa at Michigan State, Thursday. This will be the second meeting of the season for these two squads. Too bad they fall so close to each other. Oh, well. Back on Dec. 29, the Hawkeyes knocked off then-No. 1 MSU, which was without injured star Denzel Valentine. Well, Valentine is back now, radically altering the dynamic of this meeting in East Lansing.

2. Michigan State at Wisconsin, Sunday. This is a chance for the Badgers to score a huge league win, but do they have the offensive chops to keep pace with the mighty Spartans? Michigan State is 16-1, representing the Spartans' best start to a campaign since compiling an 18-1 record in 2013-14.

3. Michigan at Iowa, Sunday. The Hawkeyes don?t have a deep rotation, but they have a strong veteran corps led by Jarrod Uthoff. For the Wolverines, they will host #3/3 Maryland on Tuesday before this game, completing a three-game run vs. ranked foes.

4. Wisconsin at Northwestern, Tuesday. The Badgers are still plucky and dangerous despite a 1-3 Big Ten mark, but NU will play with a sense of urgency after already losing two home games. Northwestern's Bryant McIntosh is the first Wildcat player to tally 10 or more assists in a single-game twice in the same season. His 11 assists at Minnesota last week were the second-most by a Northwestern player in a Big Ten game.

5. Maryland at Michigan, Tuesday. The Wolverines sure could use Caris LeVert, their leading scorer who has been out with injury. Will he be back for the Terps? visit? Reports indicate it's "not optimistic."

6. Ohio State at Maryland, Saturday. The young Buckeyes aren?t ready for a trip to College Park coming off a 25-point beatdown at Indiana last week in which it trailed by 30 at halftime. The Terps are 15-1 overall, marking the program?s best start to a season in school history.

7. Indiana at Minnesota, Saturday. No James Blackmon Jr. No problem. The Hoosiers are 4-0 in the Big Ten and rolling. If IU keeps the turnovers to a minimum and plays solid defense, it is tough to beat.

8. Penn State at Purdue, Wednesday. The shine is officially off the Boilermakers, who are 3-3 in their last six games. Is this just an average team? A.J. Hammons rolls on for Purdue. He has recorded 299 career blocks, and enters Tuesday's game against Penn State just one block shy of becoming the seventh player in Big Ten history to post at least 300 blocks.

9. Nebraska at Illinois, Saturday. No team has dealt with more injuries than the Fighting Illini. And no team is more desperate for success than the Cornhuskers. Nebraska's Shavon Shields, Tai Webster and Andrew White III have all posted multiple 20-point games this season, marking the first time since the 2005-06 campaign that three Husker players have accomplished the feat.

10. Rutgers at Ohio State, Wednesday. A visit from the Scarlet Knights may be just what the doctor ordered for the Buckeyes, who look to regain their mojo after seeing a seven-game winning streak end in a blowout loss last Sunday at Indiana.

11. Penn State at Northwestern, Saturday. Two teams trying to fight their way up the food chain. Playing at home, where they already have lost twice this season, the Wildcats need to take care of business with rising star Bryant McIntosh leading the way.

12. Minnesota at Nebraska, Tuesday. The Gophers are off to an 0-4 start in the Big Ten. They began 0-5 last year and finished 6-12 in league action. Minnesota's Joey King joined the Big Ten's 1,000-career point club against Penn State last week.