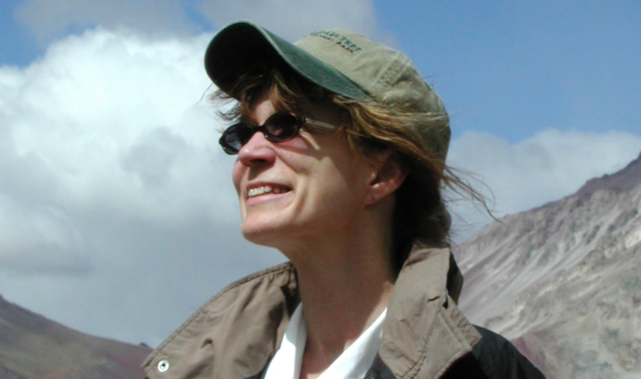 You can find lots of interesting things at the bottoms of lakes. Shipwrecks. Lost towns and cities. A physical record of climate patterns over several previous millennia.

That last one especially interests Sheri Fritz, a professor at the University of Nebraska?s School of Biological Sciences. Fritz has spent more than three decades studying global climate patterns - she actually started her research in this area while pursuing her doctorate at the University of Minnesota in the mid-1980s.

That work, which involves studying lakes, takes her from icebergs in Greenland to the foothills of the Andes. Why lakes? Because their geographic partitioning makes them uniquely well-suited to physical preserving a record of environmental changes over time.

?A lake is like a collecting basin,? Fritz explained. ?Organisms live and die. Particles in the air settle in. All of that settles in a lake in a layer-cake fashion.?

Most of the time, gathering data for study involves taking a pipe and pushing it into the mud on the lake bottom, then pulling that up. The layered deposits of soil show, for example, when the surrounding area had inordinate amounts of drought or flooding. And more broadly, that information can help scientists determine the answers to important questions to questions about climate patterns over time.

?What was the environmental and climatic impact on biodiversity?? Fritz said of questions her work attempts to answer. ?To what extent are current climate conditions anomalous, and to what extent are people involved??

That second one is somewhat politically charged, but Fritz said all the science indicates modern human civilization is affecting climate to some extent. She cites not only her own research as proof of that, but also points to studies performed by scientists around the world. The data shows there?s been a ?hockey stick? upswing in temperatures throughout the Northern Hemisphere in just a few decades.

Fritz sees a great deal of other work in areas related to climate change due to her involvement with PAGES, an international organization founded 25 years ago by two visionary scientists from the U.S. and Switzerland, respectively. Membership includes scientists around the world, who share research and ideas about how much Earth?s climate is shifting, how quickly and why that?s happening.

?The members aim to synthesize information, see where the holes are, and fill those gaps in,? she said.

Fritz was recently named co-chair (along with a Swiss counterpart) of PAGES? Science Steering Committee. In that role, she?ll not only help members? research efforts, but also help the organization in its objective of becoming more relevant in the public sphere.

?We?re trying to increase our activities to be more policy-relevant,? Fritz explained. ?Governments are pushing scientists to be more active in policy and relevant to society.?

[btn-post-package]She said the University of Nebraska supports her work in a number of ways, from funding her lab to providing her with a flexible schedule that allows her to do field work and participate in PAGES.

?To UNL?s credit, they?re very supportive of my being active [in PAGES],? Fritz said. ?They?re fully supportive of faculty being engaged at an international level.?