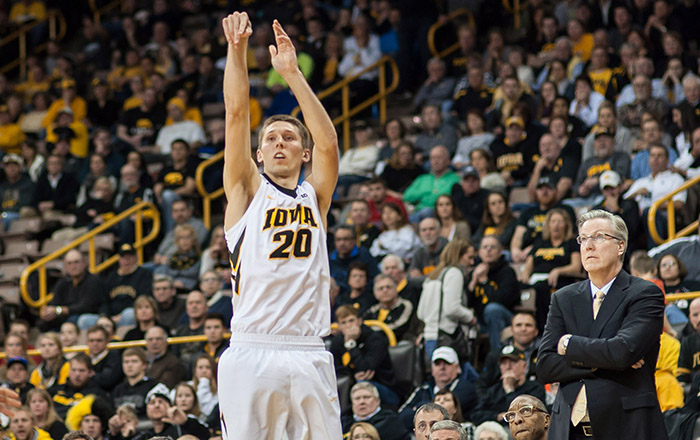 It's time for my latest look at the week that was. It?s good to be an Indiana Hoosier. And how about those Maryland Terrapins?

Biggest surprise: Indiana. Yes, the Hoosiers have lost star James Blackmon for the season to injury, but the team is hot. Last week, Indiana grinded out a 59-58 win vs. Wisconsin in which the unbeaten 1975-76 team was honored. On Sunday, the Hoosiers clubbed visiting Ohio State, 85-60. OSU had won seven in a row, including a win vs. then-No. 4 Kentucky. That?s nine wins in a row for Tom Crean?s squad, which remains tied atop the league standings with a 4-0 mark, its first such start since 2008, when it started 6-0.

Biggest disappointment: Ohio State. The Buckeyes look like maybe they had turned a corner after early-season losses to Texas-Arlington and Louisiana Tech, ripping off seven wins in a row with a win vs. then-No. 4 Kentucky. But the Buckeyes looked bad in an 85-60 loss at Indiana on Sunday. OSU trailed, 48-18, at halftime. Special mention to Purdue, which got trucked on Sunday 84-70 at previously Big Ten-winless Illinois.

Top moment: Melo Trimble's game-winning 3 at Wisconsin. It came on a cold Saturday afternoon in Madison, Wisconsin, as Trimble came up big in a 63-60 win vs. the Badgers by nailing a deep game-winning 3-pointer with 1.2 seconds left en route to finishing with 21 points.

Top dunk: Kendrick Nunn vs. Purdue. Nunn became a father early in the week, and he put himself on the highlight shows with this dunk on Caleb Swanigan on Sunday to close out the week.

Malcolm Hill can do it all.

Did you see this? Rutgers honored its 1976 Final Four team that went undefeated in the regular season at halftime of Saturday's game. Rutgers coach Eddie Jordan was the point guard of that team, and he joined the celebration.

Stock up: Maryland. The Terps are rolling, 15-1 overall and 4-0 in the Big Ten. In fact, this is the program?s best start ever. The lone loss for No. 3 Maryland was at No. 9 North Carolina. This looks like the team to beat.

Stock down: Wisconsin had a shot to make a statement ? and flopped. The Badgers fell at Indiana, 59-58, and lost on a last-second shot at home to Maryland, 63-60. The Badgers are now 9-8 overall and 1-3 in the Big Ten. This for a program that went to the last two Final Fours, including last season's national final.

Illinois? Malcolm Hill scorched Purdue for 30 points in an 84-70 throttling of the Boilermakers to give the Illini their first Big Ten win of the year.

Indiana?s Yogi Ferrell scored 19 points, broke a 53-53 tie with a 13-foot jumper with 38 seconds left, then sealed a 59-58 win over Wisconsin with four free throws in the final 13 seconds; he added 16 points, five rebounds and six assists in Sunday's rout of Ohio State.

Penn State?s Payton Banks tallied a career-high 24 points in an 86-77 win vs. Minnesota on Tuesday.

A.J. Hammons added 17 points and four blocks to help No. 20 Purdue pull away from Michigan 87-70 on Thursday.

Minnesota?s Joey King scored a career-high 22 points in an 86-77 loss at Penn State on Tuesday.

Iowa?s Mike Gesell had 22 points and 10 assists for his first career double-double in the Hawkeyes? 77-66 win vs. Nebraska on Tuesday.

Indiana?s Troy Williams had 23 points in an 85-60 blowout of Ohio State on Sunday.

Nebraska?s Andrew White had 28 points and nine rebounds to pace the Huskers past Rutgers, 90-56, Saturday night.

Michigan State?s Bryn Forbes had 20 points-all in the first half-of a 92-65 win at Penn State on Sunday.

Nebraska?s Tai Webster had a season-high 22 points in a 77-66 loss at Iowa on Tuesday.

Ohio State?s Kam Williams nailed a career-high five 3-pointers while scoring 21 to lead Ohio State to a 65-56 victory over Northwestern and its seventh straight win on Wednesday night.

Michigan?s Muhammad-Ali Abdur-Rahkman had a career-high 25 points in an 87-70 loss at Purdue on Thursday.

Northwestern?s Aaron Falzon tied a career-high with 20 points in a 77-52 win at Minnesota on Saturday.

The Scarlet Knights have never defeated a Top 10 team on the road. … Rutgers has never won a Big Ten game on the road.

Ohio State is 28-1 vs. Northwestern in the last 29 meetings.

Maryland's Diamond Stone, a Milwaukee native who was recruited by the Badgers, was booed and jeered nearly every time he touched the ball when he played in Madison on Saturday. Stone won four Wisconsin state prep titles on the Kohl Center floor while playing for Whitefish Bay Dominican in Milwaukee.

Wisconsin is 2-3 under Greg Gard, with two of the losses coming by three points or fewer; the worst loss was a six-point defeat vs. Purdue.

Purdue?s A.J. Hammons made his first start of the season on Thursday vs. Michigan.

The Gophers have started consecutive seasons 0-4 in Big Ten play for the first time since 1929-30. Last year, they lost their first five conference games and finished 6-12 in the Big Ten.

Northwestern?s 90-56 win at Rutgers was its largest road win in 95 years and gave Rutgers its worst home loss in 54 years.

Rutgers has lost 19 straight Big Ten games, dating back to last season's upset of Wisconsin, which happened exactly one year ago Monday.

Michigan State welcomed back Denzel Valentine on Sunday, and he scored 10 points and added four rebound and four assists. He had missed four games getting over kneesurgery.

"I thought our guys played not to lose rather to win." – Minnesota coach Richard Pitino, after an 86-77 loss at Penn State

"He's practicing better and he's defending better. Diamond gets it. He's coming." –  Terps coach Mark Turgeon, after an 88-63 win vs. Rutgers on Wednesday.

"Just got the jitters out and responded in the second half. I felt comfortable." –  Michigan State?s Denzel Valentine, upon returning to action from a knee injury at Penn State on Sunday.

?No doubt. No doubt.? – Penn State?s Shep Garner, when asked if his team faced a must-win vs. Minnesota on Tuesday. The Nittany Lions won, 86-77, as Garner notched 20 points. A loss would have made PSU 0-3 in the Big Ten for a fourth year in a row.

"Yeah, it's not a lot of coaching. He's special. … Just get out of his way." – Maryland coach Mark Turgeon on Melo Trimble, who nailed a game-winning three-pointer with 1.2 second left on Saturday in a 63-60 win at Wisconsin

"I know I can get hot anywhere. It felt that way as soon as we got off the plane and came here. I knew I was going to have a hot hand." – Ohio State?s Kam Williams, after a 65-56 win at Northwestern

"Obviously, our team is depleted by injuries. Our spirit was 100 percent. Our competitive nature was 100 percent. We played really hard in the second half. I appreciate Mark understanding where we are, sort of pulled out the hounds a little bit." – Rutgers coach Eddie Jordan, after an 88-63 loss at Maryland.

"My first year we're 5-5 and we lost seven in a row. Last year we win our first game and then we lose 10 in a row. We had a tough week last week against two really good teams, Maryland and Ohio State. This was a big game for us today to kind of test where we were at as a team." – Northwestern coach Chris Collins, after a 77-52 win at Minnesota on Saturday

"In the past, immaturity could have kicked in in a hurry and you get disappointed and discouraged when you're not making baskets and all of a sudden, the runs turn into routs. We never let that happen." – Indiana coach Tom Crean after a 59-58 win over Wisconsin on Tuesday