BTN LiveBIG: Wisconsin’s Biotron is a lab for all seasons 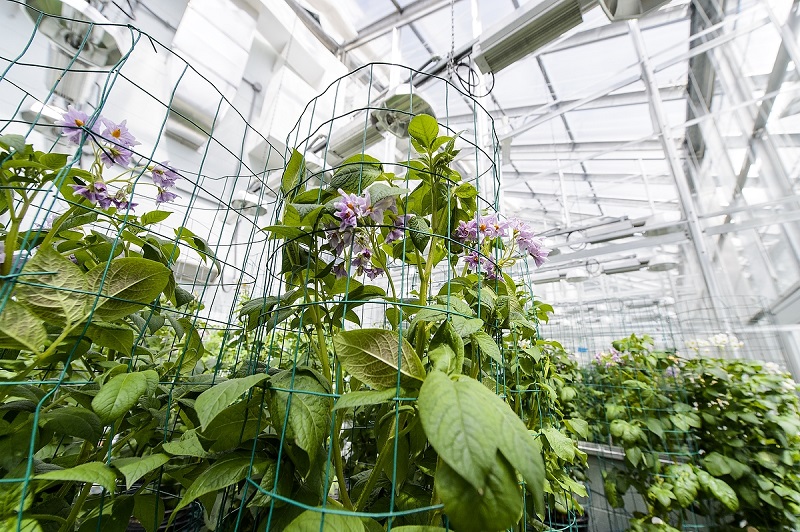 Where can you go from icy tundra to a warm equatorial climate just by going down the hall? Where can you experience the inky darkness of a moonless night and near-blinding light of day in a span of seconds, yet never leave the confines of a building?

If you?re on the University of Wisconsin campus in Madison, the answer is the Biotron.

?We replicate conditions from as far around the globe as possible,? said Dr. Hannah Carey, Biotron director. ?Our labs can go from as dry as a desert to as humid as a moist tropical fog. We have acclimatized greenhouses and rooms that are isolated from sound and vibration. We can control temperature, light, relative humidity and watering over a wide range.?

The origins of this innovative lab date back to the 1960s, when the National Science Foundation requested proposals from research universities for a new, state-of-the-art phytotron, a facility specially equipped to mimic Earth?s varied environments to better study plant life.

Wisconsin won the bid, and the university spent the next several years designing and constructing a hive of laboratories that would not only serve botanists, but would aid in as broad a range of research as possible. That included work in biology and zoology, and eventually expanded to include materials sciences.

In its early days, the Biotron played host to bit of Cold War diplomacy, of the avian variety. Thanks to the efforts of the nearby International Crane Foundation in Baraboo, Wis., the facility served as hatchery for a pair of rare Siberian cranes, whose eggs were hand-delivered from the USSR. Beyond helping bolster the population of the birds, the project was crucial in defining incubation protocols for the lab.

More recently, the lab has become home to the Wisconsin Seed Potato Certification Tissue Culture Laboratory, serving farmers throughout the nation?s third-largest potato-producing state, as well as Wisconsin Fast Plants, a group that provides fast-growing brassica (from the mustard family of plants) for use in classrooms.

And for Carey, a comparative physiologist with Wisconsin?s Veterinary Medicine School, the Biotron has played a critical role in her own research studying hibernating ground squirrels. The lab?s hibernaculum facilities provide the perfect place for her colony to settle into their simulated long winter?s nap.

?Without a place like the Biotron, this could not be done,? she said.

Though most of the work being done in the Biotron is firmly rooted to Earthbound phenomena, it occasionally stretches beyond the confines of our planet. For example, Carey?s research has led to her consulting the European Space Agency on what hibernation may mean for further space exploration.

And cultivation research done at the Biotron directly impacted the quality of the food served on the International Space Station. Just this past year, astronauts living on board the station were able to grow their own red romaine lettuce for consumption.

?The Biotron was the first place ever where plants were successfully grown under LED lights,? Carey explained. ?Lettuce production on the space station is directly related to Biotron research.?

In addition to life sciences projects, materials sciences engineers use the temperature-controlled rooms to test the resilience of a variety of substances.

?We have a concrete team in the lab right now,? Carey said. ?They can subject four tons of concrete to several years of summer and winter temperature extremes in two months. We?ve even had the campus [Babcock] creamery run experiments on their cheeses using the Biotron.?

And while research from the academic community takes precedence, private companies can and do make use of the Biotron?s unique abilities. Regional manufacturers Spring Window Fashions and Harley-Davidson and local biotech concern Exact Sciences have all subjected their products to rigorous environmental stress tests at the facility.

[btn-post-package]The level of control granted to the scientists by the lab is one of the things that make it such a sought-after testing ground. The systems of the lab are maintained by Biotron staff in conjunction with Johnson Controls, a company based in Milwaukee. This allows greater freedom for researchers, who know parameters will be maintained at precise levels and adjustments made at precise moments without constant supervision being a requirement.

?Researchers can be as hands on as they want,? Carey said. ?They can be in the lab monitoring their experiments, but they can also rest assured in the knowledge that the staff and systems are monitoring the pre-specified conditions. It?s that attention that makes the Biotron invaluable.?