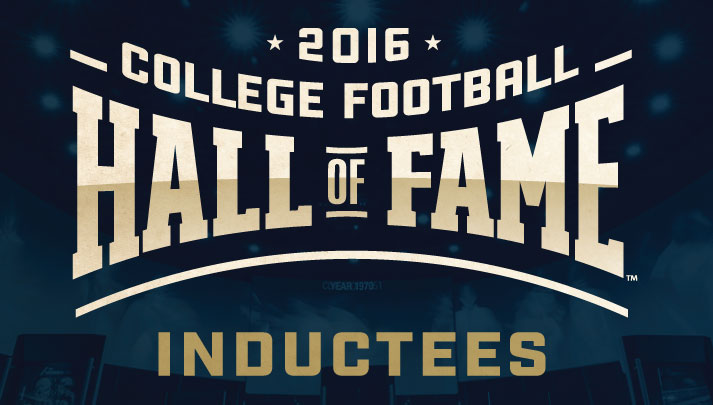 Purdue's Rod Woodson, Wisconsin's Tim Krumrie, and Ohio State's Tom Cousineau were among the 14 players and two coaches announced as members of the 2016 College Football Hall of Fame class on Friday.  The players and coaches will be formally inducted into the Hall of Fame next December at the NFF Annual Awards Dinner in New York City.

Woodson, who played for head coach Leon Burtnett from 1983 to 1986, is the 16th Boilermaker (11 players and five coaches) to be chosen for college football?s ultimate shrine. Woodson is the fifth Purdue player to be elected in the last 11 years, following quarterback Mike Phipps in 2006, quarterback Mark Herrmann in 2010, halfback Otis Armstrong in 2012 and defensive tackle Dave Butz in 2014.

As a senior with the Boilermakers, Woodson was a consensus All-American and runner-up for the Jim Thorpe Award. He was a first team All-Big Ten selection his sophomore, junior and senior seasons - one of only four players in school history to be honored three times. Woodson tied the Purdue career record with 11 interceptions (since broken and now tied for third) and owned the record for interceptions returned for touchdowns with three (since broken and now second). He presently ranks second in career solo tackles (320), fourth in total tackles (445) and ninth in pass breakups (29). He left Purdue as the career leader with 1,535 kickoff return yards, which now ranks fifth. Read more at PurdueSports.com.

After starting as a linebacker when he came to Wisconsin in 1979, Krumrie found a home at nose guard and redefined how the position was played over a decorated career for the Badgers. Leading the Badgers in tackles in each of his four seasons, Krumrie still ranks No. 3 in UW history with 444 career stops, the most ever by a defensive lineman. His 276 solo tackles remain the Badgers' career record.

Krumrie, who never missed a start in 46 career games, was a consensus first-team All-America selection in 1981, a Walter Camp All-American in 1982 and went on to earn All-Big Ten honors three times. He helped the Badgers upset No. 1-ranked Michigan in their 1981 season opener and, in his final college game, was named Defensive MVP of the 1982 Independence Bowl after UW held Kansas State to just three points on the way to the program's first-ever bowl win. Read more at UWBadgers.com.

This guy could play! That's why he is now a member of the @cfbhall. #Badgers @timkrumrie https://t.co/GnqRwUVc81

Cousineau, a four-year letterman (1975-78) played on the Woody Hayes? teams that won three Big Ten Conference championships (outright, undefeated champions in 1975 at 8-0 and co-champions in 1976 and 1977).  He is the 25th Buckeye player to be enshrined in the College Football Hall of Fame.

Cousineau recorded an Ohio State record 572 tackles in his 47-game career, a total that still ranks second on the school?s all-time charts. He also totaled the second-highest career totals for solo tackles (259) and assisted tackles (310), and had 20 or more tackles seven times during his career, including the still-standing school record 29 in 1978 vs. Penn State (Chris Spielman tied the mark with 29 tackles in a 1986 win over Michigan).