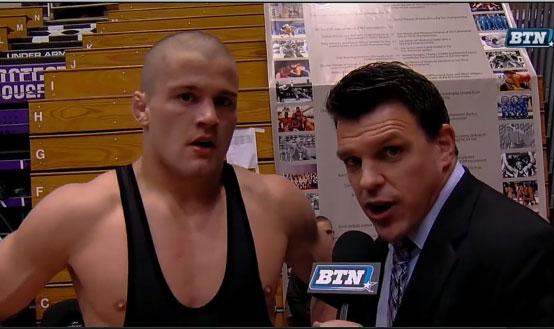 What a great time in college wrestling! It has been quite the week. Let's start with reigning national champion Ohio State. After becoming the youngest word champion in U.S. history this past September, the plan was for the NCAA runner Kyle Snyder to take an Olympic redshirt.

As my girlfriend Lori and I were out bringing in the new year my phone dinged with a new email. It was a release from Ohio State announcing that Snyder would be back in the lineup this season and at heavyweight. Game changer! Now the plan is for Snyder to make his debut Feb. 5 when the Buckeyes welcome Penn State to Columbus (that match airs at 6 p.m. ET on BTN/BTN2Go). He will continue to focus his training on making the Olympic team in April as he will travel overseas twice over the next two months.

Snyder may also wrestle in the Wisconsin dual in February before the Big Ten and NCAA Championships. Competing at 215 pounds (97 kg) at the Olympic trials just three weeks after the NCAA Championships in Iowa City, Snyder will wrestle heavyweight for Ohio State. Snyder immediately was ranked No. 2 behind two-time reigning national champion Nick Gwiazdowski of North Carolina State.

Top ranked Penn State and its high-octane offense captured its sixth straight title at the Southern Scuffle while crowning five champions. Zain Retherford is an animal! Ranked No. 1 at 149 pounds, Retherford scored three tech falls, a major and a pin en route to the title. His top work reminds me of Logan Stieber. He's like a rabid dog foaming at the mouth. Vicious and relentless on top. I love it!

Bonus points have always been what separates the Nittany Lions from their competition, and I think that is going to be the difference when it's all said and done this season. These guys make wrestling exciting by letting it fly and scoring points. Bo Nickal knocked off No.1 ranked Brian Realbuto of Cornell and current No. 2 Ethan Ramos of North Carolina to take home the 174 pound championship. Nickal has climbed his way all the way to the top spot of the rankings at the weight class. Nickal is another guy that opens up and wrestles. He can hurt you upper body with his double overhooks and can do damage in space with his low level attacks. Bo Nickal gets "sprinkles on his ice cream" for his impressive performance at the Scuffle. The confidence bleeds through this Penn State team.

With three guys raked No. 1 and three others in the top-four, this team has major horsepower.

Iowa won its 25th Midlands team championship. No. 2 Brandon Sorensen led the way for the Hawkeyes scoring a takedown in sudden victory to beat rival Jason Tsirtsis of Northwestern in the 149 pound final. Kaboom!! These two guys have had some good battles the past couple seasons and are now 2-2 against each other. Iowa travels back to Northwestern this Sunday so another showdown looms. With Retherford, Sorensen and Tsirtsis holding the top three spots in the rankings and with three others ranked in the top-nine, 149 pounds is the best weight class in the Big 10.

We're getting into the  meat of the Big Ten schedule now. No. 12 Michigan will host No. 19 Oregon State tonight (available by subscription on BTN Plus) before invading No. 7 Ohio State this Saturday in a match showcased on BTN at 5 p.m. ET (also live on BTN2Go). This match features six weight classes that pit ranked wrestlers against each other. 133 pounds will be a critical match with No. 8 Johnni DiJulius and No. 16 Rossi Brunno.

DiJulius is coming off an 8-3 loss to No. 7 Zane Richards of Illinois. Good chance Hunter Stieber is back for Ohio State and a meeting with No. 8 Alec Pantaleo at 149 will be of special interest. After his redshirt was pulled, we get our first look at No. 15 Myles Martin as he squares off against No. 19 Davonte Mahomes of Michigan. With several "toss up" matches this should be a great dual between fierce rivals. Like most duals in this conference, every point, every second wrestled inside that circle will be important.

A couple individual matchups to follow are No. 2 Cory Clark of Iowa and No. 7 Zane Richards of Illinois at 133. Clark is 2-1 all-time against Richards. Iowa tangles with Illinois this Friday night in Champaign. As I mentioned earlier, Sorensen and Tsirtsis are set to lock horns again on Sunday in Evanston.

Another quick note on Iowa: Brody Grothus will make his season debut at 141 pounds at the Pat "Flash" Flanagan Open in Dubuque, Iowa. This is huge for Iowa and will further solidify the bottom half of their lineup. Minnesota welcomes Maryland this Friday night on BTN at 9 p.m. ET (also live on BTN2Go) before traveling to Nebraska Sunday. At 149 pounds a top-10 matchup ensues between Nebraska's Jake Sueflohn (No. 5) and No. 9 Jake Short.

It's always a battle in the Big Ten. Let's wrestle!