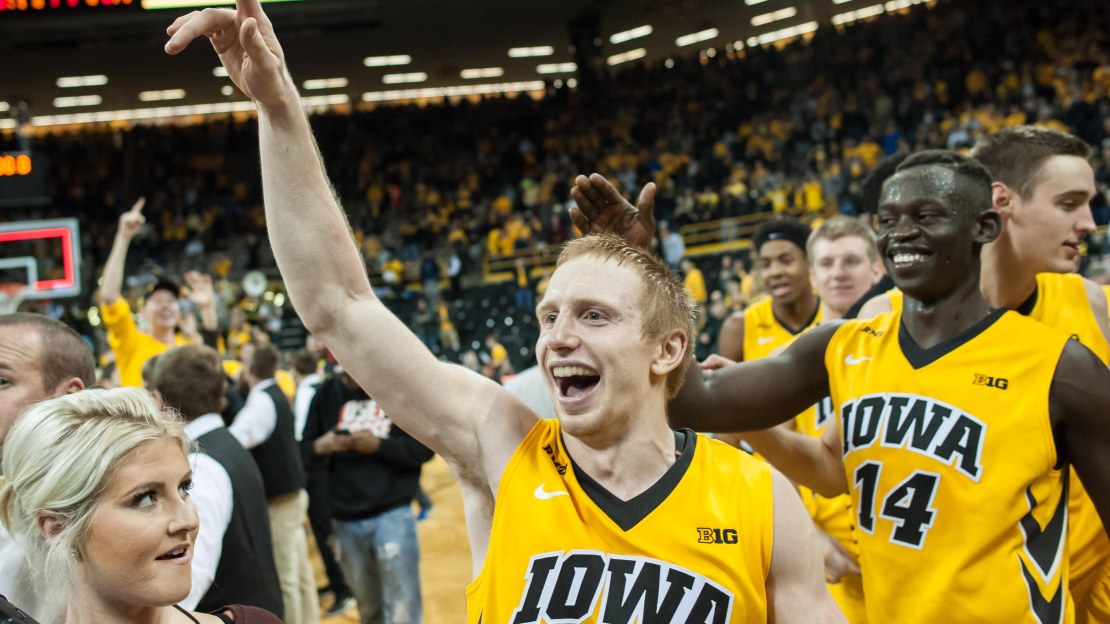 The lid has been taken off Big Ten play, and five schools are off to 2-0 starts. Two of them aren?t a shock, as Maryland and Indiana are out of the gates quickly. But it?s a surprise to see Michigan, Ohio State and Iowa also 2-0 in Big Ten action.

Here is a look back at the week.

Biggest surprise: Iowa. Ladies and gentlemen, meet your Big Ten dark horse. Remember when this team lost an exhibition game to Division II Augustana College in November? Seems like 100 years ago. Since then, the Hawkeyes have become the hottest team in the Big Ten-if not the nation-with wins last week vs. No. 1 Michigan State and at No. 14 Purdue. Not bad for a team that few thought had a legit chance to compete for the league title.

Biggest disappointment: Purdue. Coming off a big win at Wisconsin to open Big Ten play, Purdue blew a 37-20 halftime lead vs. Iowa at home on Saturday, collapsing in a heap in a stunning 70-63 loss. The Boilermakers had won 15 in a row at home.

Top player: Jarrod Uthoff, Iowa. It has to be someone from Iowa, right? The Hawkeyes have a few worthy options, but let's go with Uthoff, who averaged 17.5 points in Iowa's aforementioned signature wins. That's good and all, but he also swatted an eye-popping 11 shots. Props to Ohio State?s Marc Loving, too, who had 20 points and 13 assists in a 78-63 win vs. Minnesota on Wednesday and then 27 points in a 75-73 win vs. Illinois on Sunday.

Top stat line: Maryland freshman big man Diamond Stone is living up to his lofty hype. He was a monster in a win vs. Penn State, scoring 39 points-the most ever for a Terp freshman. He also added 12 rebounds. Stone hit 19-of-25 free-throws, a program record.

Top moment: It was pretty cool to see Purdue welcome back Boilermaker icon Rick Mount to Mackey Arena. The legendary sharpshooter and the school had been estranged for over 25 years. Mount left Purdue as the Big Ten?s all-time scoring leader with 2,323 points through only three seasons (freshmen were ineligible). Too bad Purdue fell apart in a stupefying loss to Iowa.

This was a great moment, too.

Top dunk: Johnny Hill vs. Iowa. The Purdue point guard split a pair of defenders and posterized the Hawkeyes on this fine dunk.

Top layup: Glynn Watson Jr. vs. Indiana. Do yourself a favor and check out the Nebraska guard's athletic reverse layup.

Did you see this? Zak Showalter hit all eight of his shots, including four 3-pointers, en route to scoring a career-high 21 points vs. Rutgers. The perfect day from the field was the Big Ten's first with at least eight attempts since Indiana's Will Sheehey went 9-of-9 in February 2013.

Stock up: Iowa. No one may have a better week all season. The Hawkeyes began with a surprisingly easy 83-70 win vs. No. 1 Michigan State (which was without star Denzel Valentine). It was Iowa?s first victory over a No. 1 team in 16 years. That was followed by a brilliant 70-63 triumph at Purdue in which the Hawkeyes rallied from a 17-point halftime deficit.

Stock down: Purdue. The Boilermakers had some mojo coming home off a 61-55 win at Wisconsin. Adding juice was the fact school legend Rick Mount would be in Mackey Arena for the first time in decades. Alas, the Boilers flopped, 70-63, after blowing a 17-point halftime edge. Monster questions face a Purdue team whose guard play doesn?t look championship caliber.

Michigan State?s Matt Costello had 17 points and 15 rebounds (both career highs) in a 69-61 win at Minnesota on Saturday.

Mike Gesell scored a career-high 25 points and Iowa cruised past top-ranked Michigan State 83-70 on Tuesday night, handing the Spartans their first loss of the season.

Northwestern freshman Dererk Pardon had 28 points and 12 rebounds in an 81-72 win at Nebraska on Wednesday. It was just his second college game, as he helped led the Wildcats back from a 12-point hole in the second half.

Dererk Pardon is Zach Randolph with a better motor and similar skill set. Olah comes back and @NUMensBball has depth!

Wisconsin?s Zak Showalter notched a career-high 21 points in a 79-57 win vs. Rutgers on Saturday.

Michigan?s Mark Donnal had 26 points, nine rebounds and three blocks–all career-highs– in a 78-68 win at Illinois on Wednesday, and he added 16 points and eight rebounds in a 79-56 win vs. Penn State on Saturday.

Purdue?s A.J. Hammons put his team on his back in a 61-55 win at Wisconsin, notching 24 points off the bench on Tuesday.

Nebraska: Has opened Big Ten play with at least two straight losses each of the five seasons it's been in the conference.

Tom Crean said James Blackmon's right knee is still being evaluated and no timetable has been set for his return. He has been out the last two games.

The Scarlet Knights played vs. Wisconsin with just eight scholarship players, in part because of three injuries to their front court.

Iowa was the second team from its state to take down the top-ranked team at home this season. Northern Iowa knocked off North Carolina in November in Cedar Falls.

Tom Izzo?s father passed away on Monday. "My dad was kind of a two-job, blue-collar immigrant that worked his posterior off most of his life, and that's what I asked of my team. `Don't honor him with a win. Honor him by how we play.' That's been the most disappointing of all the things that've happened in the last two days," Izzo said.

"I think Diamond (Stone) likes the bright lights, the stage, he likes to be challenged. We were extremely challenged today. He had 39 points and 12 rebounds, but when I watch the tape, I will probably be most pleased with his defense." – Maryland coach Mark Turgeon

"Their front line's still unbelievable without (Denzel) Valentine. I can only imagine what it's like with Valentine. That was some of the best basketball we've played yet. We grew up a lot during that game." – Minnesota?s Jordan Murphy after his Gophers lost to MSU

"It was one of the rare times in my career I thought we got, for (lack) of a better choice of words, punked. We got out-hustled." – Michigan State coach Tom Izzo after losing at Iowa

"Just an outstanding performance by a young player who we had really high hopes for coming in. We thought we got a gem with him. He was an under-the-radar recruit that we felt had a chance to be really good, and his work ethic and his ability to be ready when called upon like he was when Alex (Olah) went down was amazing." – Northwestern coach Chris Collins on Dererk Pardon after a big game at Nebraska