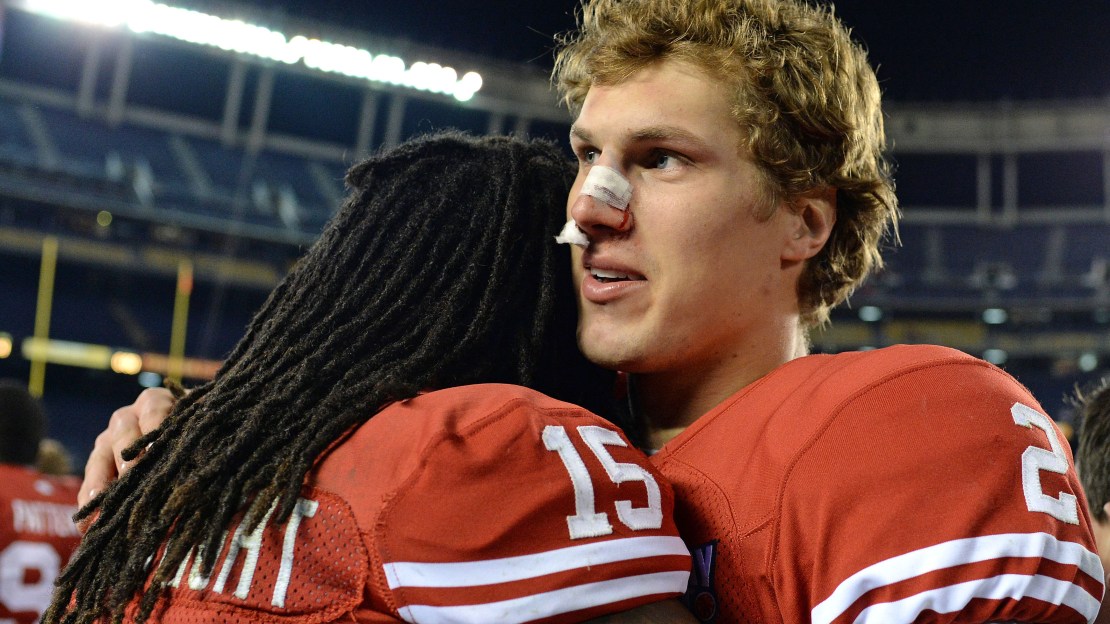 The Big Ten college football bowl season is officially in the books.

Yes, the Big Ten came up short in its bid to defend the national title won last year by Ohio State. But the conference had some memorable moments during its 5-5 postseason.

Here is a look back at the Best of the Big Ten Bowls.

Best bowl: Things didn?t start well for Nebraska in the Foster Farms Bowl, as UCLA built a 21-7 lead behind the passing of Josh Rosen. But the Husker defense settled down, allowing just 386 total yards, and Tommy Armstrong was on top of his game as Nebraska rallied for a 37-29 victory.
Honorable mention: Indiana?s loss to Duke in the Pinstripe Bowl was painful ? but a thriller. The first Big Ten team out of the postseason box, the Hoosiers dropped a 44-41 overtime decision to the Blue Devils in a tilt that featured eight lead changes. It looked like IU had forged a second OT, but Griffin Oakes missed a 38-yarder. Replays seemed to show the kick was good. Nevertheless, the call stood ? and IU lost in its first bowl since 2007.

Best play: Midway through the second quarter of the Rose Bowl, Stanford led 28-0 and was driving for more. That?s when it happened. On first-and-10 from the Iowa 31, Cardinal QB Kevin Hogan dropped back and faked a fumble ? and continued to drop back. He then heaved a pass to a wide-open Michael Rector for a TD to make it 35-0 with 8:22 left in the half. It was one of the most creative and well-conceived plays of the season by any team.
Honorable mention: Early in the third quarter of the Foster Farms Bowl, Nebraska WR Stanley Morgan Jr., made a spectacular one-handed 22-yard TD catch from a perfectly delivered pass from Tommy Armstrong. The TD gave the Cornhuskers a 27-21 lead after they trailed 21-7. Watch the touchdown!

Yesterday we saw a fake punt. Today, we see a fake fumble go for a TD. The New Year's Six has been fun. https://t.co/QaN5OtMiOD

Best player: Ezekiel Elliott, RB, Ohio State. Playing in his final college game vs. Notre Dame in the Fiesta Bowl, the star junior ran for 149 yards and four touchdowns, which tied a career-high, set in last season?s championship game vs. Oregon. He also added 30 yards receiving on a pretty play down the sideline.
Honorable mention: Devine Redding, RB, Indiana. Subbing for injured Jordan Howard, Redding ran 35 times for 227 yards and a TD in the Pinstripe Bowl. He had 23 carries for 135 yards at halftime.

Best moment: How about Ohio State?s Ezekiel Elliott flashing a Joey Bosa shrug after tallying his fourth TD in a Fiesta Bowl win vs. Notre Dame? Sweet. It was a nice gesture, especially because Bosa didn?t get an opportunity to do the celebration in his final game in an Ohio State uniform.
Honorable mention: In the third quarter of the Holiday Bowl, Wisconsin LB Jack Cichy was a one-man wrecking crew. He didn?t play in the first half, forced to sit out after being flagged for targeting in the previous game. Cichy played with a pent-up fury, notching nine tackles and three sacks (all on consecutive plays). And his pressure on another play forced a USC interception.

Best surprise: Penn State QB Trace McSorley. Penn State QB Christian Hackenberg left the TaxSlayer Bowl midway through the second quarter with a shoulder injury and the game tied, 3-3. McSorley took over and played well. He hit 14-of-27 passes for 142 yards with two TDs and ran seven times for 31 yards, throwing into the end zone on the final play in hopes of tying the game. Hackenberg hit 8-of-14 passes for 139 yards and a pick in what was his last game.
Honorable mention: It was great to see ex-Minnesota coach Jerry Kill on the sideline of the Quick Lane Bowl enjoying victory for a program that he has set in motion for continued success by laying a good foundation. And, he even is growing a beard.

Best kick: Wisconsin kicker Rafael Gaglianone nailed three field goals, including a game-winning 29-yarder in the final minutes of the contest that were the winning points vs. USC in the Holiday Bowl.

While you were sleeping, the #Badgers were celebrating. @HolidayBowlGame https://t.co/hlSBYSYpPg

Best win: Michigan?s 41-7 demolition of Florida in the Capital One Bowl was impressive. This was a Gator squad that had won the SEC East and played in the SEC title game. Senior quarterback Jake Rudock threw for 278 yards and three touchdowns, while the Wolverines? defense held Florida to just 273 yards of total offense in a commanding win.
Honorable mention: Wisconsin?s win vs. USC in the Holiday Bowl was sweet. This was a Trojan squad that dripped with NFL talent and had played in the Pac-12 title game. The defense excelled, as did Badger QB Joel Stave, who hit 18-of-27 passes for 217 yards and a TD. This was his 31st win as Badger QB, setting a school record. He showed lots of toughness and guts, leaving the game at one point in the fourth quarter after taking a shoe to the nose that caused a cut.

Best effort by an opponent: Stanford?s Christian McCaffrey was sensational vs. Iowa in the Rose Bowl. He was the Heisman runner-up but probably should have won the bronze bauble. McCaffrey set the tone early by taking a pass 75 yards to pay dirt on the first play of the game. He continued to dominate all day, setting a Rose Bowl record for total yards with 368 and became the first player in Rose Bowl annals with over 100 yards rushing (172) and receiving (105).
Honorable mention: Alabama QB Jake Coker totally out played counterpart Connor Cook in the Cotton Bowl, hitting 25-of-30 passes for 286 yards and two TDs. His completions and yards were career-highs. His ability to hit passes down field made up for the less-than-sensational game for Heisman winner Derrick Henry, who had just 75 yards rushing on 20 totes with two TDs. Coker hit some big passes (50 and 41 yards) and didn?t commit a turnover. Huge.

Christian McCaffrey is already at work promoting his 2016 Heisman campaign.https://t.co/TjAPWmg4aV

Best offensive effort: Indiana. After a scoreless first quarter in the Pinstripe Bowl, Indiana?s attack came to life in the second half to forge a 17-17 tie. The offense finished with 667 yards, notching 389 through the air and 278 on the ground.
Honorable mention: The Wolverines? offense was near unstoppable against Florida in the Citrus Bowl. They put up 503 total yards on offense and spread it out, totaling 278 yards through the air and 225 on the ground. Most importantly, Michigan dominated time of possession in this game. The Wolverines held onto the ball for 36:13 on offense, compared to Florida?s 21:22 time of possession. Overall, it was a dominant performance for this Michigan offense.

Devine Redding closed out the campaign with a career-high 227 yards on a career-high 35 carries with one touchdown.https://t.co/fQqzLIlQjP

Best defensive effort: Michigan?s defense was great from start to finish, holding the Gators to just 273 yards of total offense and limiting them to a measly 5.2 yards per play. The Wolverines picked off Florida twice and limited standout running back Kelvin Taylor to just 50 yards on 11 carries. Remember, this came without D.J. Durkin, who served as the Wolverines? defensive coordinator this season before accepting the head coaching job at Maryland. Hats off to Greg Mattison and the entire Michigan defense for a standout performance.
Honorable mention: The Badger defense lived up to its billing, as it entered the Holiday Bowl No. 1 in the nation in scoring defense (13.1 ppg). Wisconsin played well in the first half, limiting USC to 24 plays, the fewest for the Trojans in a first half since 2012. And this is a Trojan offense loaded with speed and skill. SC finished with a paltry 286 yards of offense and few big plays. Soon after the game, coordinator Dave Aranda took the same job at LSU.

Best moment to forget: Ohio State star DE Joey Bosa got booted from the Fiesta Bowl for targeting in the first quarter. Bosa apologized for the penalty soon after being ejected. Not the best way to end your career.
Honorable mention: Iowa?s first quarter. Before fans had settled into their seats, Stanford had a 7-0 lead after scoring on a 75-yard TD pass on the first play of the game. The Cardinal followed that with an efficient TD drive to make it 14-0. The Hawkeyes then had a nice drive working to stem the Stanford tide ? but then C.J. Beathard tossed a pick six. Just like that, it was 21-0 Stanford with over four minutes left in the opening quarter.

Joey Bosa has been disqualified on this targeting penalty. https://t.co/4fyeIbfwTv #FiestaBowl