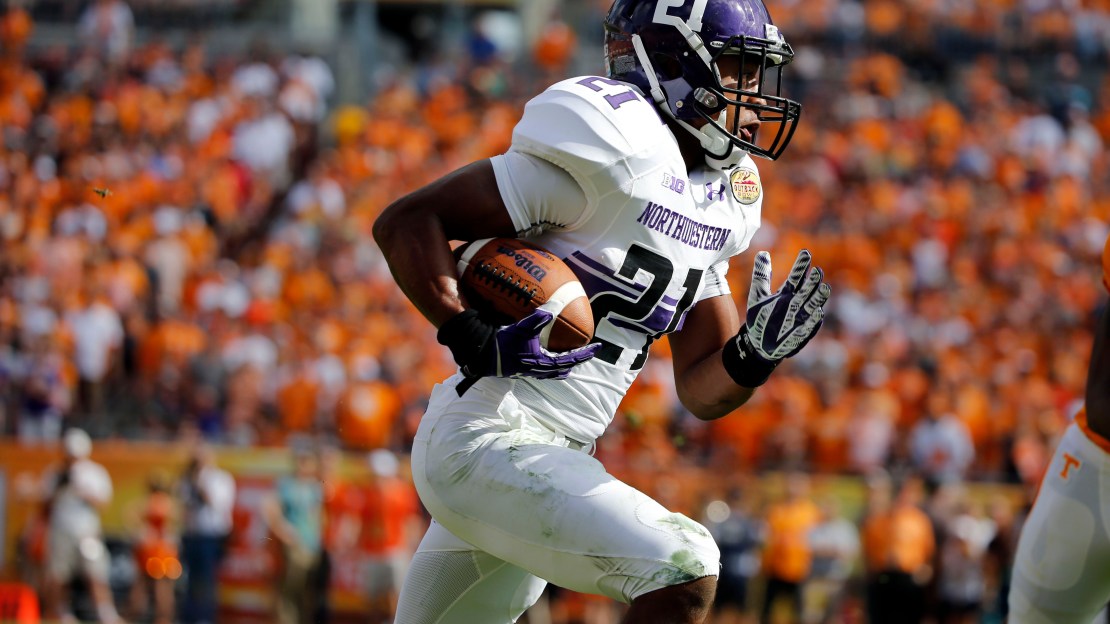 Northwestern was looking to put an exclamation point on a standout 10-win season by dumping an SEC team. It didn?t happen for what has been one of the nation?s most surprising teams that opened 2015 with a win vs. Pac-12 champ Stanford.

The Wildcats lacked the big-play ability on offense to keep pace vs. the athletic Volunteers, one of the SEC?s fast-rising programs under Butch Jones that closed the year with six wins in a row in what was the largest margin of victory in Outback Bowl history. Still, NU?s rebound from back-to-back 5-7 season was a good sign for Pat Fitzgerald?s program moving forward.

BEST OF THE OUTBACK BOWL

Best play: Early in the fourth quarter, Tennessee RB Jalen Hurd was wrapped up at the line of scrimmage. But he broke through an arm tackle for a 24-yard gain. Later in the same drive, UT QB Joshua Dobbs dropped a shot gun snap, picked it up and zipped around the right end while tip-toeing down the sideline and lunging for an 18-yard TD to give Tennessee a 31-6 lead with 11:42 to go in the game.

Josh Dobbs fumbled the snap ... and then somehow straddled the sideline to score.

What a touchdown. Vols rolling. https://t.co/E8dI6xzjbN

Best player: NU RB Justin Jackson entered the day with more carries than anyone in the nation (298) and was No. 2 in the Big Ten in rushing with 1,344 yards. He finished with 74 yards on 14 carries with a TD. While Jackson was the Wildcats? star, UT RB Jalen Hurd was the star of the game, rushing for 130 yards on 24 carries with a TD. The 6-4, 240-pound Hurd is a special player.

Best moment: The Northwestern coaches came out for the game wearing shorts. Yes, shorts. What would Bear Bryant think? Who cares? The NU staff sported shorts two other times this season-and won both games. So, why not pull them out of the dresser again, especially on a hot Tampa day? The Wildcat coaches looked good–but still lost.

Offense: F. NU arrived in Tampa last in the Big Ten in scoring (20.7 ppg) and last in offense (332.6 ypg). And, the struggles continued vs. a speedy Tennessee defense. Redshirt freshman QB Clayton Thorson has endured an uneven season. And, it continued on this day vs. Tennessee. He hit 51 percent during the season with seven TDs and seven picks entering today. And he ran for 374 yards. Today, Thorson completed 8-of-20 passes for 57 yards and two picks before giving way to Zack Oliver, who also tossed two interceptions (including a pick six). The Wildcats finished with just 261 yards offense.

Defense: D+. The speed and athletic ability edge for Tennessee was apparent on both sides of the ball for Tennessee. And the NU defense had issues containing the explosive ability of Vol QB Joshua Dobbs and RBs Jalen Hurd and Alvin Kamara. Time and again, Tennessee was able to line up and just run the ball. The Vol line was more physical, and Hurd and Kamara were a formidable 1-2 punch. Tennessee finished with 420 yards with 226 coming on the ground and 194 coming through the air.

Special teams: D. Not good, especially in the first half. Both teams missed a field goal. And NU?s Jack Mitchell missed an extra point. In the third quarter, NU snuffed out a fake punt by Tennessee. Alas, it led to no points for the Wildcats.

It was over when: Tennessee led, 17-6, at halftime, but the Vols were in firm control. A three-yard TD run by Jalen Hurd with 4:40 left in the third quarter gave Tennessee a 24-6 lead-and essentially closed the book on NU, which could get little going all day on offense.

A look toward 2016: Pat Fitzgerald has this program on solid footing. In fact, from a talent and personnel standpoint, NU may be in the best shape in the school?s history. The defense teems with speed and athletic ability, as LB Anthony Walker will be back. The offense needs to develop more explosive ability-and that begins with the QB spot. Until then, the Wildcats can lean on RB Justin Jackson, who will be one of the Big Ten?s best backs in 2016 for a team that will have a legit shot to win the West next fall. These are salad days in Evanston.