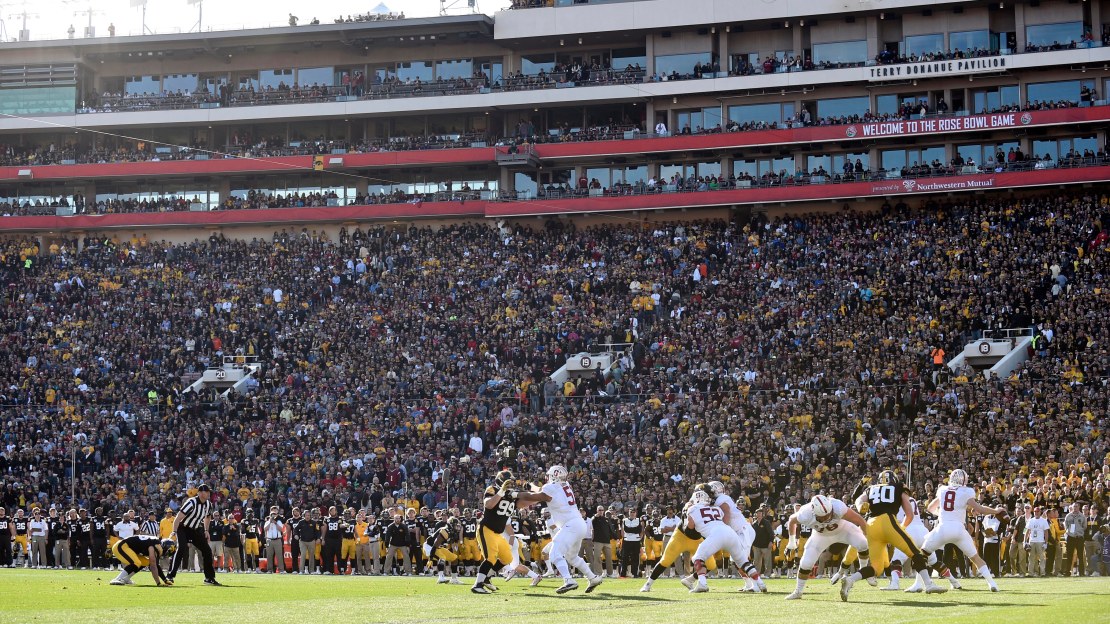 This time last year, Iowa was getting scortched by Tennessee in the TaxSlayer Bowl to cap a disappointing 7-6 season that set in motion an offseason of tumult. Kirk Ferentz examined his program and made alterations, including switching practices from afternoon to morning. But most prescient, Ferentz tabbed C.J. Beathard the QB over Jake Rudock shortly after the loss to the Vols. Rudock transferred to Michigan, Beathard became a star and the rest is history.

The Hawkeyes went on to post a season for the ages, going 12-0 before losing in the Big Ten title game. Now, Iowa has lost two in a row following this blowout loss to Stanford. The Cardinal raced to a 21-0 lead in the first quarter. And it was 35-0 at halftime. Iowa has now lost its last four Rose Bowls, last winning after the 1958 season. Still, nothing can sully what has been one of the best seasons in Iowa history.

BEST OF THE ROSE BOWL

Best play: Midway through the second quarter, Stanford led 28-0 and was driving for more. That?s when it happened. On first-and-10 from the Iowa 31, Cardinal QB Kevin Hogan dropped back and faked a fumble ? and continued to drop back. He then heaved a pass to a wide-open Michael Rector for a TD to make it 35-0 with 8:22 left in the half. It was one of the most creative and well-conceived plays of the season by any team.

Best player: Without a doubt, it was Stanford?s No. 5, Christian McCaffrey. He was the Heisman runner-up but probably should have won the bronze bauble. McCaffrey set the tone early by taking a pass 75 yards to paydirt on the first play of the game. He continued to dominate all day, setting a Rose Bowl record for total yards with 368 and became the first player in Rose Bowl annals with over 100 yards rushing (172) and receiving (105).

Best moment: Considering this game was basically over in the first half for Iowa, let?s go with the Hawkeyes walking onto the regal Rose Bowl field bathed in southern California sunshine. It was a sight that hadn?t been seen in a quarter century, as the program hadn?t been in Pasadena since the 1990 season. So, returning to this tradition-steeped venue was a glorious moment.

Offense: C-. It?s no secret-Iowa wants to be physical and run the ball with a fleet of capable backs. And that helps setup the passing game for C.J. Beathard, who has the arm strength to go deep. But by getting into a deep hole, the Hawkeyes weren?t able to maintain a run-heavy game plan. Not much went right, and Iowa notched just 290 yards. Beathard was abused with seven sacks and numerous hits.

Defense: D. The Hawkeyes? M.O. on defense has been the same for years-bend but don?t break. Iowa doesn?t want to give up the big play, wanting to force foes to drive long distances in multiple-play drives to score touchdowns. Coordinator Phil Parker doesn?t take too many chances with blitzes. Iowa knew it had to stop (or at least slow down) Christian McCaffrey. Well, it failed. Stanford was able to control the line of scrimmage and run and pass with aplomb. The Cardinal finished with 430 yards with 207 coming on the ground.

Special teams: F. When a game is a blowout like this one, special teams become less of a factor. But give an edge to Stanford, when we saw-who else?-Christian McCaffrey run back a punt 63 yards for a TD in the second quarter to give Stanford a 28-0 lead. Iowa also missed a PAT, adding to its woes.

It was over when: Before fans had settled into their seats, Stanford had a 7-0 lead after scoring on a 75-yard TD pass on the first play of the game. The Cardinal followed that with an efficient TD drive to make it 14-0. The Hawkeyes then had a nice drive working to stem the Stanford tide ? but then C.J. Beathard tossed a pick six. Just like that, it was 21-0 Stanford with over four minutes left in the opening quarter.

A look toward 2016: Iowa should be the favorite to win the West again with C.J. Beathard back under center. And backs LeShun Daniels, Akrum Wadley and Derrick Mitchell return, too. The line should be stout but it loses G Jordan Walsh and C Austin Blythe and has tackles Boone Myers and Cole Croston back. Most key players will be back on defense, but CB Desmond King probably will go pro and Nate Meier is a senior. Bottom line: Iowa has a lot of mojo and will be a big-time factor in 2016.